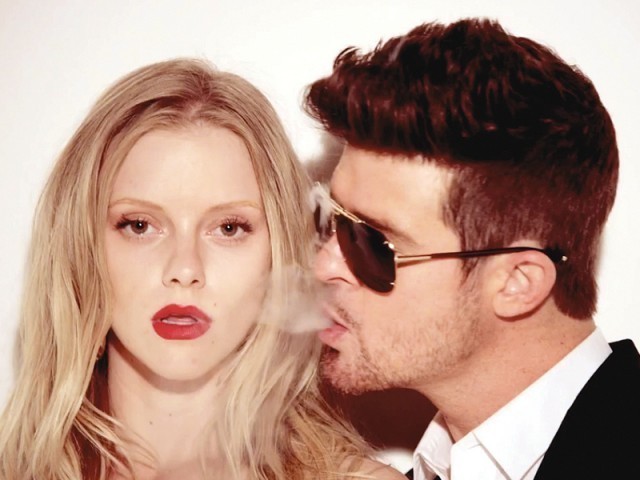 Robin Thicke's song 'Blurred Lines' has been branded as a ‘rape anthem’ and has been banned by several UK student unions. PHOTO: FILE

The song that took social media by storm is undoubtedly catchy. As I hummed it, I was oblivious to the fact that the lyrics would create such a social media uproar and spark controversy all over the world, making it one of the most frequently played songs of the decade and promoting Robin Thicke to surpass all boundaries of fame or notoriety.

For a long time, I wasn’t aware of what all the fuss was about. To me, Blurred Lines was just another song. The song introduced the ‘twerking’ phenomenon to the world with our once innocent ‘Hannah Montana’ showing the world how this ‘move’ is carried out at the MTV Video Music Awards (VMA) and it was then that I did a little bit of research to find out just how appalling and degrading the song was.

The song that has been branded as a ‘rape anthem’ on several media platforms has been banned by the University College London (UCL) student union alongside 20 other UK student unions. And after carefully listening to the lyrics, I would rightly agree to the branding myself.

The lyrics promote violence against women and reinforce rape myths, which several countries are working hard to dissipate. I failed to come across a single lyric that promoted respecting women, discouraging men from objectifying women or encouraged boys to make girls feel comfortable in their presence. Instead it does the complete opposite of it all and conceptualises untaken consent as something interesting and fascinating.

In light of the controversy, one of the singer’s social media advisers’ thought it was a good idea for Thicke to participate in a live debate session on Twitter using the hash tag #AskThicke. It started out as an innocent marketing strategy to promote his then-upcoming album, Paula, dedicated to his wife – a wife who has already filed for separation.

#AskThicke Did you really write a rape anthem as a love song for your wife and are you still wondering why she left you?

In hindsight, it truly is a wonder what his PR team was thinking when they decided to run this campaign. I didn’t follow the debacle myself, but as of now, I wish I had seen the events unfold. Those of you who did, I have to say, I’m jealous.

Only good things can come from #AskThicke or something extremely tragic. Either way #GettinMyPopcornReady

Robin Thicke is doing a twitter Q+A tomorrow which I predict will end worse than his marriage. #AskThicke

You would think it started out fine before it got hijacked. You would be wrong. The first question put forward to him was a personal one.

I am curious, though. Has she? Or did the gazillion apologies at concerts not work yet?

There were some genuinely curious questions as well.

#AskThicke Robin, other than being a misogynist what are your hobbies? Soccer? Racism? Crazy Golf?

#AskThicke When you're not busy objectifying women, making light of rape and justifying sexual violence, how do you like to relax?

Kudos to the people of Australia for purchasing <55 copies of @robinthicke's new album (nationwide). How does that make you feel? #AskThicke

#AskThicke For a first date chloroform or rohypnol?

#AskThicke if a woman says no but 'you know she wants it'. How many years in prison would you serve for statutory rape?

This is amazing http://t.co/mROPnq7wZT "What form of sexual or emotional abuse will you be normalising in your next jaunty hit?" #AskThicke

It wasn’t long before the puns started coming in. What do you expect when you write a song with the lyrics “I know you want it”, really?

#AskThicke Can I punch you in the face? No? You mean yes, right? You know you want it.

.@robinthicke wants the #AskThicke tweets to stop? Good thing he taught us that no means yes!

#AskThicke It might seem like some of the questions on this hashtag are cruel and abusive but Robin, I know you want it

#AskThicke Do you know the line you'll have to sign on the divorce papers won't be blurred?

The message is clear. We do not want young girls to look at a video of scantily clad women and get the idea that their bodies are to be used as mere sexual objects. We do not want young boys looking at the video and thinking that a girl’s consent is not really necessary and all you have to do is read between the lines.

Treat women like human beings who have a right to be respected and have a mind of their own to make decisions. And more importantly, learn to respect those decisions. Stop objectifying women!

Unlike his new album, the experiment proved to be excellent entertainment.

Robin Thicke's Twitter 'ask me anything' goes as well as expected http://t.co/qFSw4FaC0e #AskThicke

The Twitter campaign had all the ingredients of a regular “ask me anything” publicity event:

How does it feel to be the Joffrey Lannister of pop? #AskThicke

The life lesson for future generations (and we all know we can learn a lot from Robin Thicke, he’s practically a cautionary tale):

#AskThicke Any general tips for women trying to avoid men like you?

#AskThicke If a train leave the station travelling at 60km/h at 9am, how tight will I have to tie the ropes securing you to the track?

A shout-out to his famous father:

If your dad wasn't Alan Thicke what would have been your first choice for a fast food chain to work at? #AskThicke

And a piece of advice:

Don't #AskThicke how many copies of Paula he sold this week… http://t.co/7VhvaCm04j

Needless to say, Robin Thicke was literally “asking for it” (no pun intended).

#AskThicke don't you think this is an ironic hashtag considering you're not one for asking?

We are all aware of the fact that sexist attitudes exist in every corner of the world and will not cease to exist. But such songs strengthen and encourage such insolences instead of discouraging them. The reaction on Twitter (and his album sales) prove that the people are not willing to let go of such degradation of women easily.