What does religion have to do with football? 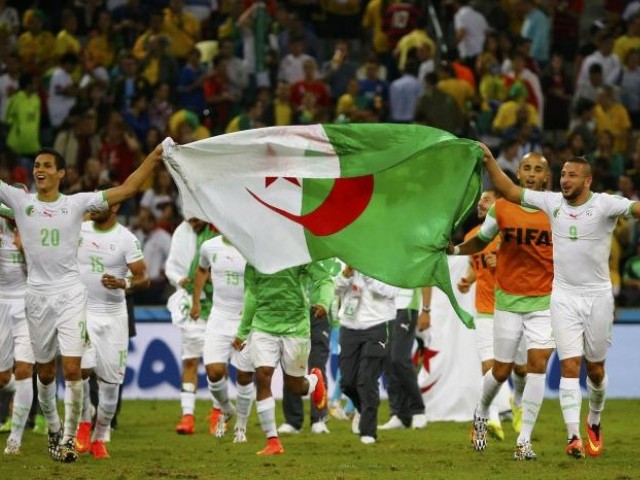 Algerian fans should support and respect the players, as they played an honourable game and did their best. Their religious convictions should not be even part of such discussions. PHOTO: REUTERS

The World Cup 2014 is about to reach its final stages, with the quarterfinals matches starting from Friday, July 4. The knockout rounds saw major teams facing a tough challenge against underdog teams and five out of eight matches went into extra-time so that a winner could be decided. This highlights the intensity of these matches.

The clash between the mighty Germans and the dark horses, Algeria, also went onto extra time. Andrea Schurrle scored in the opening minutes of the extra time, to give Germany an edge over the highly impressive Algerian side. Mesut Ozil doubled Germany’s lead in the 119th minutes and two minutes later, A Djabou scored a consolation goal for the Algerians. The match ended at 2-1, with Germany advancing to the quarterfinals of the World Cup.

Throughout the game, the Algerians proved to be tough competition for Germany, seeing how the match ended up going into extra-time. However, reports have emerged that blame for Algeria’s loss is being attributed to the fact that the players were fasting during the match. The game kicked off less than an hour before sunset and the players were only able to break their fast late into the first half of the match. The Algerian coach and players have all categorically stated that fasting had nothing to do with the loss.

Would that somehow justify their loss to the media? What business did the media have in asking the players questions as personal as whether or not they performed their religious duties that day or not.

It baffles me as to how people can twist and turn things around to make controversies and scandals out of absolutely nothing.  Yes, football may be a demanding game that requires complete mental and physical fitness, but take a look at the highlights of the match. Do the conditions look out of the ordinary? In my opinion, the Algerian side delivered a great performance and belittling their efforts by blaming the loss on the fact that some players were fasting is absurd.

Germany was never going to be an easy opponent, I think all of us knew that, and despite that, Algeria gave them a run for their money.

The Algerians played on counter-attacks, running off-the-ball more often, that much is true. But that could have been the case with any team, and due to any reason. What if Germany had lost? Would Ramazan have been given any thought at all? For all we know, the loss could have been largely because of the lack of strategy amongst the defenders of the team. After all, it was because of the defenders that Ozil was able to score the second goal. You cannot blame the whole team for an error a couple of players made, that too at the very end of the game.

Many are saying that because Ozil did not fast during the match, he was able to perform better. Well, Ozil wasn’t fasting in any of the matches he played earlier either, yet he wasn’t able to score a single goal – I wonder what we can blame that on.

Talks about Muslim players fasting during the World Cup were already abundant amongst different media organisation. I am sure it is natural for media houses to jump to the conclusion that any defeat faced by a Muslim team, or players, is due to their religious beliefs. And that is exactly what happened in Algeria’s case.

The Algerians put up a truly nail-biting fight against Germany. And dismissing their efforts and playing the blame game is unfair. Many people took to Twitter to show their support for the North African team.

Half of Algeria's team was fasting due to Ramadan and they still took one of the best teams in the world to extra time. #respect

Respect to Algeria. 17 of their 23 players are fasting for Ramadan. No food, no water. 120 min of running. Amazing stuff.

Just learned that most of the #Algeria team were playing under Ramadan dietary restrictions. Outstanding efforts those.

My point is – FIFA is about football and nothing else. Corrupting the game by turning it into a religious debate is in very bad taste and should not have happened to begin with. The fact that we can bring religion into every sphere of our life is the problem. This discussion of whether Ramazan had anything to do with it is redundant and puts a lot of pressure on the players. Those observing a fast would be intimidated into not fasting and those not observing a fast would be blamed for any loss. The matter of religion is private and has nothing to do with anyone else in the world. I don’t know when we will start understanding that.

It is time that we leave such frivolous ideas behind and look forward to the upcoming quarterfinals. Hopefully none of these matches will end up being persecuted at the hands of the media and fans again.

A Finance student at the Institute of Business Management, Saif is a football fanatic and a food lover. He tweets as @saif_ajafri (twitter.com/saif_ajafri)

UEFA Champions League: Will we witness another El Clásico?