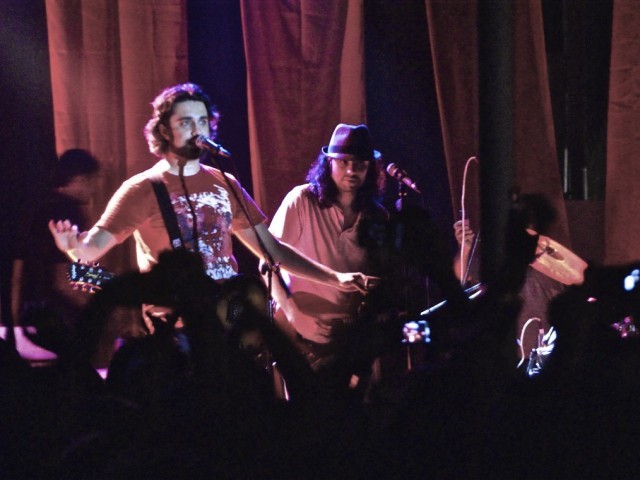 “The Sound of Hope”.

Initially it surprised me that the event was being held on a Sunday night, as opposed to a Saturday night, when it would have been likely to draw a larger crowd. The event had been originally scheduled to take place on September October 18th, but was postponed due to the civil unrest in the city by the sea.

In the face of all odds

The rescheduled event took place against a backdrop of violence in Karachi, which left over 41 people dead. In the hours leading upto the event, many were unsure about whether or not it would still be held. The organising committee, however, promised that the show would go on and promised to give Karachiites a night to remember. I, for one, was certainly glad this concert was taking place. In the one year since I moved back to Pakistan from the United Kingdom, this was the third or fourth musical event facing postponement.

Upon arriving at the venue, my friends and I witnessed something surprising: the event had begun on time! Though I did receive an email from the organisers a day before suggesting that the event would start and finish on time, I had been rather skeptical. The concert began promptly at 9 pm and when we arrived half an hour later, we could already hear bands and a stand-up comedian performing as we waited in line.

At the entrance we received another surprise. Gate crashers and preferential entries were not witnessed and everything ran smoothly. There was enough security to prevent gate crashing and there was nobody in sight attempting to break in. Most likely, Karachiites were just happy to finally have a chance to enjoy a musical event.

Noori and Ali Azmat were the two performers that the audience was especially looking forward to seeing. The moment finally arrived when Ali Noor and Ali Hamza, the two recognised faces of Noori, made their way to the stage. The crowd, including myself and my friends, was jubilant. Over the course of the next 40 minutes, Noori performed some of their most popular tracks as the excited crowd sang along. All but one of the tracks they performed last evening were from their first album, including “Suno kay main hoon Jawan”, “Manwa Re” and “Dil ki Qasm”. Noori summed up their performance with special applause for their former drummer Gumby, who was on stage all night, initially with the introductory bands, and later with Noori and Ali Azmat.

There was a brief interval or a period of silence between the performance by Noori and that by Ali Azmat, which led many of those in the audience to believe that the concert was over and Ali Azmat was not going to perform. As soon as Ali Azmat came onto the stage, the crowd greeted him with demands of “Sayonee”, a song from his days with Junoon. He did not entertain that request, but sang other big hits, such as “Pappu yaar” and “Na Re Na” from his debut solo album.

Last night’s event also featured bits and pieces of comedy from renowned stand up comedian Sami Shah who I am guessing was the onstage host for the event. Though he was not at his very best, he nonetheless managed to make a fair few people laugh. Overall, it was certainly a night to remember.

A chance to listen to music

The concert was a much-needed event for Karachiites, who had been longing for something to boost their spirits and morale in times like these, when the city is plagued with violence and the country has been ravaged by floods. With time, we can only hope more events such as this one are held. Last night’s event truly lived up to its title-it really was the sound of hope.