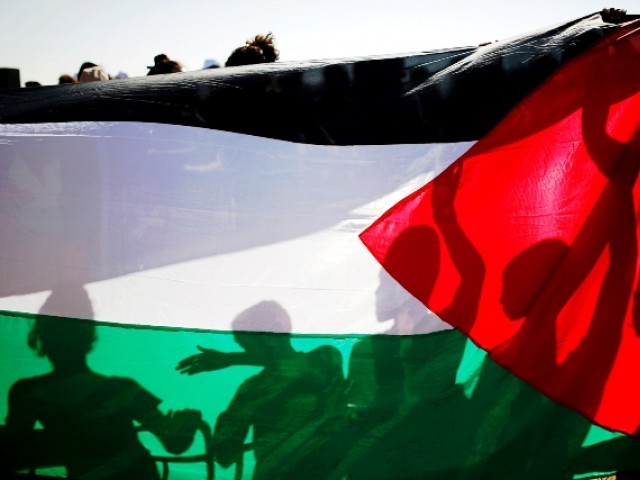 The sustenance of a ‘dubious’ status quo leads to the intentional and politically motivated ambiguity that Israel needs to postpone any definitive compromise while maintaining a façade of ‘working towards resolution’. PHOTO: REUTERS

For months, US Secretary of State John Kerry had been involved in the strenuous task of achieving the famous ‘Two State Solution’. This meant the co-existence of a Jewish democratic state alongside a Palestinian state, with Jerusalem being the shared capital between the two.

Unfortunately, and quite predictably, this project exceeded its announced deadline, and we were left with another stalemate of a situation with no end to the hostilities and a severe political deadlock. One of the fundamental demands by Prime Minister Benjamin Netanyahu was the recognition of Israel as a Jewish state. The Palestine Liberation Organisation (PLO) outright rejected this, and this article attempts to explain why this rejection was integral to the stance adopted by Palestine and what were the reasons behind it.

Whilst the aspiration of the two-state solution still looms in the corridors of the White House, ground realities seem to be counter facing any potential diplomatic resolution. This ‘solution’ is being propagated as being the ideal and only possible answer to any reconciliation; there are some principal issues that understandably hinder any success achieved regarding the two states idea. The Palestine-Israel conflict has been a historically exhausting issue, dating back to the 19th century. Its prolonged presence today is the very tragedy that brings me to write about this. However, being limited to only a ‘news specific’ aspect of this issue, I would like to extend my respect and empathise with all sentiment surrounding the millions of victims and their families, regardless of their cultural, religious or political background. The humanitarian urgency of this situation is a grave and serious concern, one that may never be able to translate in words.

Arguing that the PLO should not agree to this demand despite immense pressure from the other parties involved, the main reason why this demand is highly contentious is the fact that this recognition would effectively renounce the internationally recognised right of return of the Palestinian refugees, and legitimise state sanctioned discrimination and legal marginalisation of the non-Jewish minorities in Israel.

The first and foremost reason for PLO’s refusal to acknowledge Israel as a Jewish state is the horrifying reality that in doing so, the recognition of a Zionist narrative would be expected, negating the age old pursuit of a historical state of Palestine.

This acceptance would entail a broad denial of Palestinians’ historical annexation, an expectation that is both humiliating and demoralising for people who have experienced ethnic cleansing for over half a century. This identification of a Jewish state would effectively imply Palestinian acceptance of subordinate status of Israel’s 1.7 million Muslim, Christian and Druze citizens. Therefore, the legal marginalisation of these minorities as second class citizens would just be an added distress to the existing institutional and societal discrimination of Palestinian Israelis.

Additionally, this heated debate is being played out against genuine anxiety in Israel that demographics point to a steady decline in the Jewish majority within the country. The demographic trends in Israel are proving to be alarming as the Arab Muslim population in the country has increased from 12.7% to 20.7%, whereas the Jewish majority has declined from 83.7% to 75.3% between the years 1980 to 2013. Therefore, the insecurity of the Israeli government can be seen transforming into a defensive position of securing concrete recognition of its Jewish existence in the state of Israel in advance.

PLO’s recognition of Israel in 1988 was a historic compromise that was a huge leap forward from the Palestinian side. However, this demand of acknowledging a Jewish state was not part of the Oslo peace process. It was only in 2007 that Palestinians were required to accept the Jewish statehood of Israel.

In return, Israel did not recognise Palestine as a state and only acknowledged PLO as the ‘representative of the Palestinian people’.  Moreover, during his speech, Prime Minister Netanyahu clearly denied the right of return for Palestinian refugees,

“But you need to make a series of concessions too and the first concession is to give up your dream of the right of return.”

There is another aspect that makes this deadlock of a process even more contentious. According to political analyst Nile Bowie,

“The insistence that the Palestinian side endorse the term has proven its usefulness as a spin instrument that allows the Israelis to prolong the negotiation process. Provided that Israel is perceived to be cooperating with international efforts to settle the conflict diplomatically, leaders in Tel Aviv benefit as political pressure from abroad is eased, allowing a dubious status quo to be maintained.”

This sustenance of a ‘dubious’ status quo leads to the intentional and politically motivated ambiguity that Israel needs to postpone any definitive compromise while maintaining a façade of ‘working towards resolution’.

I would reiterate the notion that if Palestinians concede to this point, the rights of Israel’s sizeable minority would be in jeopardy. Therefore, Palestinians are completely justified in their rejection of formally validating claim about Israel’s character as a Jewish state, which would subsequently hinder their leverage on any other final status which would be crucial to the Palestinian struggle. In the words of Hanan Ashrawi, former senior PLO official,

“This is like telling the Palestinians they did not exist all these hundreds and thousands of years, that this historically has been a Jewish land.”

Studying Political Science and International Development at Mcgill University, she pursued theatre and debating prior to and in college. She is interested in foreign policy and national security. She tweets @Malaeka_Khan (twitter.com/Malaeka_Khan)