Want to own a Lamborghini? Here is how it’s done! 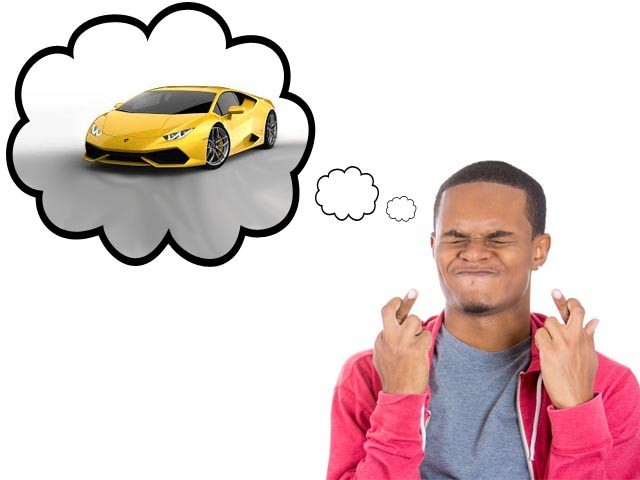 I don’t really buy what this consumerism-driven world is selling us, but practically speaking, how can an average guy buy a super car, or go for a vacation to the Bora Bora Islands, or have a pool in his basement, or have a Batman-style underground workplace?

I am not really big on cars; the previous cars I have had – a white Mehran (aka the Sex Mobile), a whiter Mehran (aka the Sugar Mama) and a maroon Mehran (aka the Kinky Dinky) – were all funded by a non-refundable loan from my dad (he is the best bank ever). Not that I don’t like my Mehrans, but yesterday I saw the latest Transformers movie, and I have to say, I would love to buy a Lamborghini for myself.

I mean, it’s about time I buy a car that has its own name, you know, like Gallardo or Aventador. I don’t think there is any person in the world who hasn’t dreamt of sipping some gannay ka juice while sitting in a Lamborghini. Is that too much to ask for? I do believe in the saying, to reach for the sky you have to aim for the stars but does that mean I aim for a jet instead?

I don’t really buy what this consumerism-driven world is selling us, but practically speaking, how can an average guy buy a super car, or go for a vacation to the Bora Bora Islands, or have a pool in his basement, or have a Batman-style underground workplace?

Are all these things really impossible to get?

Although I am a man of simple taste, content with what I have, that does not mean my desires should be humble too. I mean, come on! I want a freaking Lamborghini, but it’s even more expensive than my house!

Actually four times the cost of my house, which is also funded by daddy dear. Alas, the heart wants what it wants so my possible, legal and religiously viable solutions for getting these riches can be as follows:

Marry a person who has a Lamborghini

Stick to the rule ‘what’s yours is mine’. That is the key to success here.

Living in Pakistan, I fell in love within my social circle and am already engaged, so this is not happening. Can’t get it funded by daddy cool because he doesn’t have that sort of money. Can’t get it funded by the susraali daddy cool because he also does not have that kind of money (no offence to my susraalis, I love you guys and your car) But seriously I don’t think a person with a Lamborghini would marry me, unless I already had three of those.

Leave your job, start a business and become super successful

Seems like a good idea, but the question is, how can I leave the only source of income I have? All the young millionaires generally had some weird traits – they are either dropouts, lack social skills or have bigger problems. I have had a pretty okay life. Although I did think of coming up with a super cool app and sell it for a Lamborghini – but I don’t think that’s happening either.

Start acting, singing, dancing, modelling – do whatever it takes. Get your break and buy that beautiful piece of metal. Too farfetched? Well, I did give some acting auditions a while back – yea, they didn’t work out. Sigh.

Hence this post. Some philanthropist out there might feel bad and adopt me or just get super excited about my creative thought process and say,

“Here you go buddy, I grant you your wish, you beautiful creature.”

I don’t think I am getting a Lamborghini anytime soon. My yearly promotions won’t be enough for that. I also don’t think there are any other practical solutions. There is one thing I can do, ‘hope’ – a human’s greatest strength and worst weakness. But, hey, it’s free!

Anyways, I ‘hope’ you have better luck than I did.

He is currently working within the media industry. Dreams of becoming a stand-up comedian, he also wants to change the world.