I live in Iraq and I am not afraid 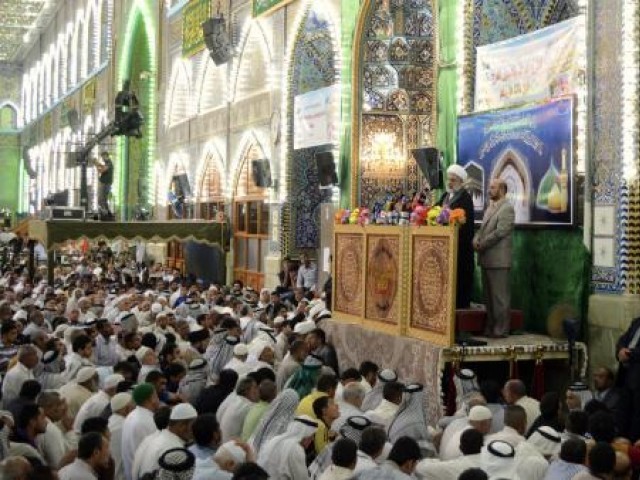 Sheikh Abd al-Mahdi Karbala’i, representative of the Grand Ayatollah Sistani, giving his Friday sermon and asking Iraqis to join the fight against the ISIS. PHOTO: REUTERS

I was at Karbala when Sheikh Abd al-Mahdi Karbala’i, representative of the Grand Ayatollah Sistani, gave his fiery Friday sermon in which he delivered the message of Sistani to the people, asking Iraqis to register as volunteers in the fight against the Islamic State of Iraq and the Levant (ISIS), whom he called “takfiris”.

The atmosphere became extremely spirited during the speech. Perhaps it was because of the nature of the event during which this speech was made that everyone felt connected to each other. It was the eve of the birth of the twelfth imam of the Shiite sect, Imam Mehdi, and this message on this particular day by the Ayatollah was an implicit motivation for followers of the faith to take action and stand for themselves.

However, before we discuss the significance of this unity, it is important to understand how the demographics in Iraq work.

The north of Iraq is controlled by the Kurds and they have a very well trained and well equipped militia known as the Peshmerga fighters. The Kurds have taken this situation with the ISIS as an opportunity and have captured considerable disputed territories, like Kirkuk, from the Iraqi army. They are also confronting ISIS in defence of the Kurdish controlled regions, as much as they can.

The regions close to Kirkuk, such as Tel Afar, Haditha, Mosul and Ramadi, is dominated by people who have liberal notions and have started migrating in huge numbers due to the militancy that has become increasingly powerful over there.

The ISIS now stand 30 miles from Baghdad the capital itself. From Baghdad to Basra in the south, stands the Shiite heartland with the holiest of shrines, including those of Hazrat Ali (RA) in Najaf and Imam Hussain (RA) in Karbala. These shrines are heavily defended by Shia-led militias, volunteers and the Iraqi army against the ISIS.

So, at one point we see a group that is focused entirely on its own interests and has little to do with the ISIS or the Iraqi army, whereas on the other, we see people standing up for their heritage and for things they deem important. Yes, there are people who are trying their best to protect their land – with or without foreign support, despite the divisions that have been wedged into the national fabric of Iraq.

Along with division in demographics, there are different perspectives associated with the current political scenario in Iraq. A friend working in Erbil, the centre of the Kurdish region, tells me that the fervour of an independent autonomous state is at the rise. However, from other Sunni heartlands information is difficult to gather due to the stronghold of ISIS and other militia there. The Shiite majority areas are aiming towards over throwing the militancy to safeguard their civilisation.

Reports of crimes, such as persecution of Shias, have begun to come in and videos have been uploaded depicting brutal massacres taking place. For the ISIS, this Kurdish region was already a breeding ground for militants as conservative Sunni Iraqis from here have always been inclined to join the ISIS’s ranks in Syria.

Keeping all these varying developments in mind, the significance of the aforementioned speech come into view. In the south, the mood has changed significantly after the Karbala sermon. I was awestruck at the zeal and passion that I experienced in Karbala over the speech. Karbalai’s words have left an impression and impact on the streets of Najaf, Karbala and Baghdad. There is a sense of unity in the people here and they are preparing for a fight for what is rightfully theirs.

In the Kurdish and the Shia-majority regions, life retains an uneasy spirit of normalcy, mainly because the real battle has not begun yet. The Iraqi army has taken some key border posts between Syria and Iraq in recent days and there are rumours that a build-up of the Iraqi army for an assault on the ISIS has begun. Inner cities are still fairly safe. As a result, Sunni majority areas that were close to the border are coming under siege. This is particularly true for Ramadi and Fallujah, which have always been targeted in almost every war that Iraq has come across, and this time is no different. For these areas, destruction seems to have become a norm.

I came to Iraq and found that the country has great potential. There are opportunities in this country that one cannot even imagine. There is a lot to do on multiple fronts including economy and education. During all this turmoil, I see the younger Iraqi lot acting with wisdom. They seem as tired of this directionless corrupt game of politics as they are of the militancy that is taking place in the country. They understand that what is happening today is a regional scheme that is strategically planned, funded and orchestrated. In fact, from the north to the south, Iraqis on the whole are wise people, and I suppose it is this natural wisdom that will help them get through these dark times.

This wisdom will help them fend-off a militancy that now endangers its integrity. This is not just about the integrity of a nation now but the completeness of a civilisation. The gardens of Babylon in Hillah, Iraq, are the emblems of its rich history. I have no fear of living in Iraq because the message from Sistani, a source of emulation for the majority of Iraqi Shias, is balanced and intelligent. He is already counselling this nation about the importance of forming a new government to remedy the mistakes of the past. And I would like to be here when we rise to make Iraq stand on its two feet again.

Iraq may not be a symbol of unity at the moment, but we will get there – even if we have to fight for it.

An MBA from IBA who passionately follows politics in the Middle East. He has over eight years of experience in policy, management and strategy. He currently works and lives in Iraq.

Can the Kurdish referendum potentially destabilise the Middle East?