Don’t be fooled Imran Khan, this is not your revolution 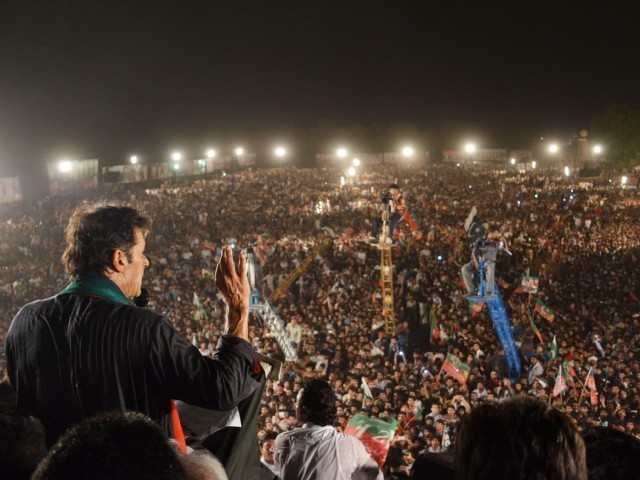 One can understand Imran’s grievances over the 2013 elections but one also needs to realise the importance of his responsibility towards the people of K-P. PHOTO: FILE

The recent political turmoil of the country could not have staged itself at a worst time than this. With the army and the nation’s sentiments tied with over thousands Internally Displace People (IDPs) in North Waziristan, the least we expected out of our politicians was a serene political climate.

Instead, we were thrown in with political gimmicks and chaos; silenced and stunned by the brutal killings carried out under the suspected supervision of the chief minister, which were reciprocated later by equally disturbing acts of vigilantism displayed against the Punjab Police. The icing on the cake, however, was our ‘revolutionary genius’ asking for the services of the army to escort him to his residence safely because they had nothing else to do besides parading with the expat.

Does this look like a country in a state of war against terrorism?

No. It looks like a country engaged in some kind of a stupid joke.

The only solace in all this madness was Imran Khan, who raised the issue of the IDPs even before it came under the government’s notice. What was saddening though was the attitude of the Punjab and Sindh government towards this entire issue. The Sindh government issued a notice stating that it could no longer host more IDPs, and yet ended up spending carelessly on the Sindh Assembly which now resembles a five star hotel. The response from the Punjab government was even more disappointing. To this day, I have had issues with the prioritisation and usage of the funds by the Sharif brethren, who happen to be astute businessmen in their own right. Where sectors such as health and education should have been given top most priority in face of our deteriorating social indicators, the Punjab government is seen to be more fixated on laptops, metro and bus schemes. The total social sector development budget is roughly (and miserably) equivalent to the metro scheme program for the Southern Punjab alone; an area which suffers from more socio-economic backwardness than transportation issues.

Once again, the Sharif government have owed up to their myopic vision by not allotting a crisis management team for the war before it started. In fact, if I recall correctly, a War Cabinet was asked to be formed once the war had already started in the Northern areas. You really can’t pull a Churchill at the eleventh hour! Something like this should have been enforced long before and should have seriously mapped out a possible evacuation and settlement plan for the IDPs. But not only was the formation of this committee ill-sorted, so was its usage of funds. The shocking incident, however, was when the Prime Minister announced a meagre 500 million rupees for the refuge crisis in North Waziristan Agency (NWA), which could barely top Malik Riaz’s donation of five billion rupees. Furthermore, there have been no talks and indications of the rehabilitation of these IDPs who will return to these areas once the operation is over.

At a time like this, one would really expect the Khyber-Pakhtunkhwa (K-P) government to be filled with logic, rationale and a proper course of action to deal with this entire issue. Obviously, after the Federal government, the direct burden and responsibility of the IDP issue lies with the provincial government. Initially, Imran owned up to his responsibility, raised a hue and cry over the IDPs and allocated a major portion of the K-P budget for the refugee crisis but now his political grievance over the four constituent seats and rigging has taken precedence over the IDP issue – where he should be circumscribing himself within the close proximity of this region to effectively monitor the crisis that has shook the nation. Instead, we, find him rallying in Southern Punjab, an area which is not his domain.

What further disturbed many were his unconstitutional claims of dissolving the K-P assembly if his demands were not met. It does not suit Mr Khan, the upholder and bearer of democracy and its constitutional concomitant, to pass such statements when it is under the chief minister’s writ to dissolve an assembly, constitutionally speaking.

Perhaps Kaptaan has chosen his pathway in accordance with Tahirul Qadri and the grand alliance, for which he has shown distant support if not die hard allegiance altogether. But what Imran needs to realise here is that he is far bigger and greater than any of these non-political entities combined in this alliance.

Qadri is a revolutionary without a vision or road map, who is being oxygenated and kept alive only by media attention. Evidently, he is here to ‘revolutionise’ the entire system, simply because he does not have enough power to revolutionise it through the ballot. Aiding him in this façade are the Chaudhry brothers from PML-Q and Sheikh Rasheed, who are now by-goners in the Pakistani political paradigm.

Compared to that, Imran has the third largest party in the National Assembly and most importantly, he is a man who actually upholds the democratic values of the nation and does not toy with them for his own ulterior motives. In retrospect, Qadri was a one-man party in the National Assembly in 2002, who eventually resigned and flew back to Canada in oblivion. The Chaudhry brethren’s PML-Q was just a cover up made by Pervez Musharraf to legitimise his autocratic rule as an administrator. And let’s not even get started on Rasheed now, who is only capable of raising the ratings of news channels and talk shows.

For me, the idea of a revolution, in times of the war and internal strife that we are struggling through, is not even justified. One can understand Imran’s grievances over the 2013 elections but one also needs to realise the importance of his duty and responsibility towards the people of K-P, which cannot be adhered to if his attention is diverted towards tsunamis, long marches and revolutions.

Recently, Khan announced yet another long march to be staged on August 14 in Islamabad, and a month’s deadline if the government does not adhere to his commands staged in Bahawalpur.

But can the government really be expected to hold the ECP and other bodies accountable, and file judicial cases when it should be concentrating on the war and settling the IDPs?

And foremostly, can Imran really take the burden of unconstitutionally dissolving the K-P assembly when it is most in need of his attention?

We have seen him go on record repeatedly and apologise for showing his support for Musharraf and his undemocratic referendum. Can he handle taking the blame for joining hands with further unconstitutional and undemocratic forces that don’t want change through a democratic process?

The idea of a revolution is to not only to cause a change in the status quo, on the contrary; it is to cause a warranted and positive change. The change that Qadri and his alliance are aiming for was perfectly worded by Tariq Butt as a change

“to bring revolution on the force of street power without the due electoral process; selectively accepting and rejecting the Constitution of Pakistan; aspiring to fuel confrontation and not inclined towards the general elections”.

Imran’s revolution should be different from the street politics run by these political orphans. His revolution should take place through the ballot and through proving his good governance demonstrated at Shaukat Khanum; one that needs to be relocated and applied to the K-P government presently.

The politics aimed by the grand alliance is a ploy to gain popular mandate through evading the electoral process, because they do not have enough support to win if they go through with it.

If Qadri really wanted to bring change, why didn’t he participate in the 2013 elections?

Why don’t PML-Q and AML have an important role to play besides street politics in the current government?

Imran’s party has already gained massive political support over the years and will play an important role in the next general elections as well. His change, tsunami and revolution will come. But it will be most forceful, legitimate and sustained if it comes through the ballot and not through hullabaloo and street politics.

He needs to find his own revolution, aimed at bringing change through constitutional and legitimate ways. Toppling the government can wait. Right now, the leader should address to more important issues and focus all his energies towards K-P. His revolution will come but for that he will need to devise a more transparent voting system to realise his mandate. But that’s not happening now, or tomorrow.

For now, the people of K-P require his mandate more strongly than those aiming to topple the system to instil in a democracy through an undemocratic process. This is his war. But this is not his revolution. The Kaptaan should wait.

Learning from the Indian elections, despite Modi's win