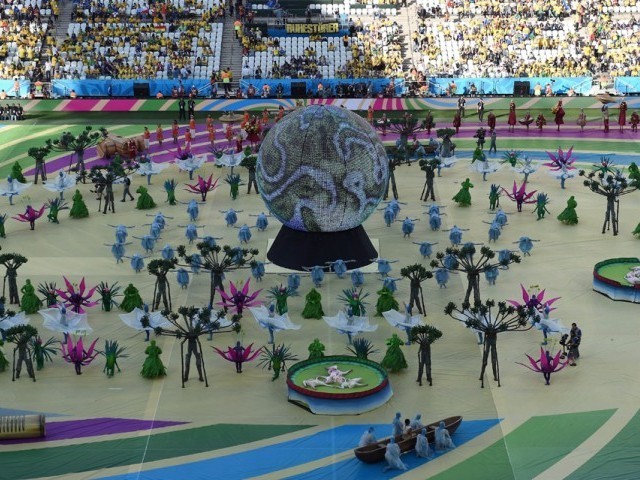 The World Cup matches have been exhilarating, exciting and have delivered up to everyone’s expectations so far. PHOTO: AFP

The Brazilian Carnival is one of the world’s most colourful and exhilarating events – Outdoor parties, colourful performers, magnificent floats, talented musicians. It truly is a fine exhibition of the Brazilian culture.

The world was expecting a similarly elating event when the 2014 FIFA World Cup opening ceremony kicked off on June 12, 2014, at Arena Corinthians Stadium in Sao Paulo. Unfortunately, it turned out to be perhaps the worst World Cup opening ceremonies ever. The organisers of the event failed to understand that Brazil is more than just talented football players and colourful costumes. It has a rich culture and tradition, most of which was left out in the event, causing thousands of spectators to feel utterly disappointed.

However, this disappointment was short-lived; football was able to instil its magic once more, as soon as the first match between Brazil and Croatia kicked off. The opening goal of the World Cup was remarkable in itself as it was the first own-goal scored by a Brazilian in the history of the tournament. Then, we witnessed some sizzling football from Brazil. Neymar, the magician, was the star of the show as Brazil secured a hard fought 3-1 victory over Croatia.

There has been no stopping since the first match. We have been treated to some really exciting and thrilling football so far in the World Cup. There have hardly been any dull or boring matches. It has been a fiesta of goals as the games have gone with an average of three goals per game.

Before the start of the knockout stages of the tournament, let’s have a look into the highs and lows of the group stage matches.

It has to be Spain, without a doubt. The world expected another exhibition of the dominant and silken football play, Tiki-Taka, from the reigning European and World Champions but they were simply abysmal in Brazil. Spain could not recover from the after effects of the Dutch onslaught in their first match and were eliminated after their loss to Chile in second match. The Spanish team consisted of almost the same players who led them to the World Cup win in 2010, and that was perhaps the sole reason for their disappointing performance.

Spain’s goalkeeper Iker Casillas reacts after a goal by Netherlands during their 2014 World Cup Group B soccer match. Photo: Reuters

Perhaps they forgot that those players have grown old by four more years and lacked the magic and skills they possessed in the previous World Cup. If Spain had used the same players, who played in final group match of the team, from the very beginning, perhaps the results would have been different.

The first name that came to my mind was Diego Costa, but an overall flop Spanish team covers that. The second name would be of the current holder of Ballon d’Or, Cristiano Ronaldo, who failed to live up to the expectations in this World Cup. He has not been able to create an impact, which the likes of Lionel Messi and Neymar have been able to create for Argentina and Brazil respectively. He virtually remained anonymous in the first two games and, being the captain, failed to put any sparkle in the Portuguese team. He probably had more haircuts than he scored goals during this World Cup so far.

Perhaps his light injury had a role in it; nevertheless, it has been a miserable outing for Ronaldo.

This was not difficult to select, as it can only be one – Luis Suarez and his bite. The guy is a prolific striker and there is no denial about his goal scoring abilities. But there is one other thing he does on the pitch besides scoring goals, and that’s biting his fellow players. Italy’s Giorgio Chiellini is the latest victim on his biting list, after FC PSV’s Otman Bakkal and Chelsea’s Branislov Ivanovic.

It was absolutely disgraceful, not only for football but for sports in general.

The Spanish team was just starting to come in its element after scoring a penalty in the 27th minute through Xabi Alonso. It looked like the Netherlands were in for the same fate as they had in the World Cup finale of 2010. However, during the first half, in the 44th minute, a bird, an aeroplane, Superman or a five star footballer, say whatever you like, emerged in the form of an airborne Robin Van Persie. Daley Blind played a long ball over the top of the Spanish defenders and Van Persie launched like a human projectile to head in the goal. It has to be one of the best goals of the history of the World Cup ever!

Robin van Persie of the Netherlands heads to score against Spain during their 2014 World Cup Group B soccer match. Photo: Reuters

This man is carrying the hopes of an entire nation single-handedly on his shoulders and he is one of the most gifted players on the planet. His name is Neymar da Silva Santos Júnior. Neymar has been the lone warrior of the Brazilian team so far, especially as many of the other Brazilian players have faltered consistently throughout the tournament. Although Messi and Robben have exhibited some startling game-play, Neymar has just been outstanding – with four goals, a shooting accuracy of 89% and a passing accuracy of 82% in three matches.

Brazil’s forward Neymar celebrates after scoring a penalty during the Group A football match between Brazil and Croatia. Photo: AFP

After earning four points from its first two group games, Mexico needed a draw or a win against Croatia to make it to the knockout stages. Mexico booked their place to the next phase with a comprehensive 3-1 victory. Goals scored by Mexicans were exciting, yes, but they were no match to the post-goal celebrations of their manager Miguel Herrera. He tackled defender Paul Aguilar to the ground in celebration and then motioned goalkeeper Guillermo Ochoa to jump into his arms in a fit of joy.

Can Belgium win the World Cup? Ask anyone and this question will be dismissed with a vehement “no”. Belgium has no history or culture of success at the World Cup or any other major international tournament. The furthest they have ever reached at the FIFA World Cup is in the semi-finals in 1986. But this time around, they could very well surprise all of us.

They currently have, what you can call, a golden generation of players: Nacer Chadli, Eden Hazard, Romelu Lakaku, Vincent Kompany, Marouane Fellaini and Adnan Janujaz. They may not have faced bigger teams in the group stages so far but they have the capability to challenge any strong team that comes there way and hence, they are the real dark horses of this tournament.

Brazil and Argentina have the South American home advantages, Germany is the most well-balanced team, France has a very talented pool of players but no team has as dangerous an attacking line up as that of the Netherlands. It has been an exhibition of magical football by the three forwards, Wesley Sneijder, Van Persie and Arjen Robben, so far in this tournament. Van Perise has been on target and Robben has dazzled the opposition with his super pace. The midfield and defending line up has been up to the mark in their support to the three forwards.

For me, Netherlands are the predictable winners of this World Cup.

The World Cup matches have been exhilarating, exciting and have lived up to everyone’s expectations so far. I can’t wait to watch the knockout rounds and see who else scores an amazing goal, celebrates a prolific victory or falls prey to a biting injury.