Dear politicians, is this really the right time to discuss politics? 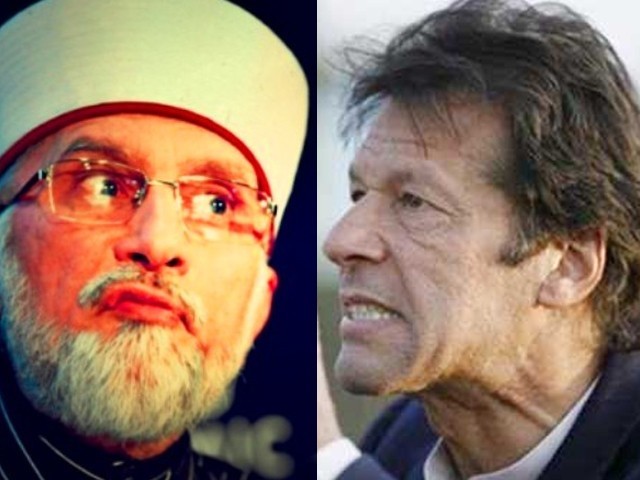 These provincial governments seem intent on making the burden of a national military operation a provincial matter restricted to the already war-torn K-P and Balochistan.

For the third time now, Imran Khan has threatened to dissolve the Khyber-Pakhtunkhwa (K-P) Assembly. And for the second time, Tahirul Qadri has pledged to transform Pakistan into an Islamic utopia by coming all the way from Canada.

Is this because the greatest problems Pakistan faces right now are entirely of a political nature or because Pakistan is not ‘Islamic’ enough for Canadian nationals and that needs to be changed? Yes and perhaps, respectively. Or maybe, the state is a bit too intent on cutting down on tax exemptions. Yes, our politicians have identified Pakistan’s major problems spot on.

When the army stepped in and began its military operation and everyone effectively ditched negotiations, everyone also automatically assumed that Pakistani refugees, who would be displaced as a result, would have rosy lives in well-managed camps. Also, all civilians would be safely evacuated, again, with the help of the army.

Other than this being an overly optimistic view of a military operation, it also turned out to be absolutely wrong. Why you may ask? Well, here are the ground realities.

The main refugee camp at Bannu is largely deserted, firstly because the main camp is suffering from a severe food shortage and secondly, because Bannu is not a comfortable hill-retreat, with temperatures soaring over 40 degrees. Many of the refugees present in Bannu arrived on expensive private transport, while many of the men had to stay behind to guard their property.

This is not exactly the colourful view our government has tried to portray of the operation.

In fact, these internally displaced persons (IDPs) prefer moving towards larger towns and cities – so they may get proper facilities – with the luckier ones counting on their relatives to provide them shelter and the hopeful ones planning to make some new friends once they reach there. But the question is what if they don’t make new friends? What will become of them then?

Given the fact that the government has yet to announce any alternative rationing mechanisms in other informal refugee centres, these unfortunate IDPs are doomed to become Pakistan’s next Afghan refugees; people who once had normal lives and then became the face of the world’s opium trade and radical groups.

But no, the government seems more insistent on ensuring that these half a million don’t get run over by metro buses in prosperous Punjab or litter the grounds of the Bhutto shrine in liberal Sindh. These provincial governments seem intent on making the burden of a national military operation a provincial matter restricted to the already war-torn K-P and Balochistan. What purpose does scoring political points and burdening the other two provinces with even more problems serve?

Prime Minister Nawaz Sharif is busy publicising his interest-free loan schemes, which always seem to work out so well, instead of visiting the refugee camps earlier. Actually, it seems like the government really wants these Pakistanis to be alienated and left on their own to deal with this crisis. What the government doesn’t understand is that if these IDPs are not taken care of and they end up being influenced by the wrong party, we’ll have a lot more rebels to busy ourselves with in the future.

But before we can begin blaming the Iranians, Americans, Indians, Israelis or the neighbourhood Jews for new insurgencies, one has to appreciate the depth of hospitality which the locals from Pashtun Bannu to Hindko Abbottabad have given to these people. Images of residents handing out water and small amounts of food have flooded the internet. This is frankly the only indicator that a Pakistan beyond ethnic, provincial and religious boundaries still exists.

The real ‘collateral damage’ of this operation, something that stings when a drone strike kills civilians but something everyone just shrugs their shoulders at if it’s the military, will probably come out later. Already, a secret Al-Jazeera footage shows a completely destroyed bazaar and claims that innocent civilians are facing the brunt of the military offensive. Previous operations have had tragic consequences for both the locals and the soldiers fighting, and notably, no political representative has visited their outposts to give them a morale boost.

Qadri once propagated himself as ‘fighting for the state and not for politics’. Recent events have proved that all our elected and unelected representatives fight for just one thing – their own political prestige.