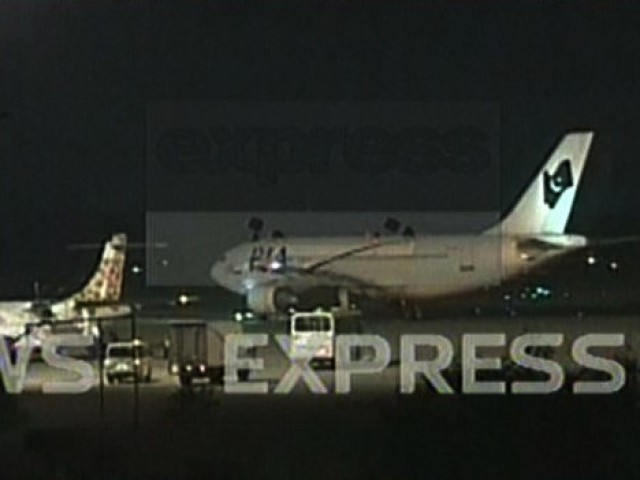 A screengrab from Express News.

A person belonging to the procurement department of a military-related setup once told me an interesting story about how the US had banned the sale of F-16 spare parts to Pakistan and had blacklisted the concerned setup.

A metallic plate of some specific calibre was urgently required for the F-16s and they had run out of any other options. Out of utter necessity and desperation, one of the officers from the organisation called up a blacksmith from Gujranwala and asked him to forge the plate. The blacksmith was able to forge an exact copy of the plate and for much less money, using local material. He concluded the story by saying,

“We Pakistanis are masters of reinvention.”

Well, unfortunately, with time it has been proven that we are indeed capable of reinventing, among other things, the newer facets of terrorism.

After introducing suicide attacks on military installations, blowing up schools, conducting bloody rampages at Muharram processions and killing polio workers, the new and more broadened sphere of airport attacks have also been penetrated into this terrorism phenomenon.

I have used the word ‘phenomenon’ here because our airports have, in recent days, seen many shades of it. From the terrorist attack at Karachi airport, to the Tahirul Qadri debacle at both Lahore and Islamabad airports and yesterday’s aerial firing at the PK-756 at the Peshawar airport, our country has seen it all. These instances have gravely damaged Pakistan’s image internationally. And why wouldn’t it be damaged? Four of our major airports have been in the line of fire for a month now. What does that say about security in our country, anyway?

For any foreigner, the prospect of coming to Pakistan, does not seem bright at all. If he isn’t already sceptical about Pakistan after the whole 2011 Osama bin Laden fiasco, these back-to-back blows to our airports will most definitely cast doubts in his mind before he decides to venture out.

An airport is the first thing a foreigner sees, in any country – it’s the first impression.

Now just imagine a foreigner landing at an airport in Pakistan where bullets are sprayed on the aircraft. Imagine Pakistani security forces running all over the runway chasing militants who managed to infiltrate ‘high alert security’ systems and attack aeroplanes on the runway. Think of the passengers freaking out and asking him to take cover or run for his life. Or imagine a regular flight, upon landing, being randomly shot at – to the point that a bullet penetrates through the body of the plane to injure and even kill a passenger. Imagine sitting next to a passenger who was just shot dead. She was in the plane, safe and sound, wasn’t she? Or on a lighter note, imagine him sitting next to a Pakistani politician who refuses to disembark and in effect, takes the entire plane hostage. Can you imagine what that poor foreigner must be thinking? You think he would want to return to such a country again? Adventure, thrills and jokes apart, this country is in no way safe for its own citizens at the moment; foreigners are another thing altogether.

To add to an already deplorable visual, in comes our media. As always, in its race to be the first one to break the bad news to the world, they go to the most irresponsible lengths possible. In fact, yesterday, after the attack on the Peshawar airport, a reporter grabbed hold of an injured flight steward and began interviewing him on air, asking him about whether he had any idea who fired at the plane and what was happening around him. An injured steward, who was probably in shock, was put on air for an interview. The magnitude of sheer stupidity here cannot be emphasised enough.

Are media protocols or ethics not explained to reporters? Are ratings so important that human empathy is put on the backburner each time? Why is behaviour of this kind tolerated? Why aren’t media houses held accountable for the absolutely lack of professionalism?

The Bacha Khan International Airport, Peshawar, was attacked previously in 2012. But of course, why would we learn. It is not like the next attack took place the next day or anything, so why waste our resources and beef up security? Post 9/11, all airports in the United States have been equipped with upped security measures and emergency measures. That incident took place once. It has been 13years since then and yet, even today, no one can penetrate the security measures in place at an American airport. But why would we take lessons from the Americans or any other foreign country? We are so ‘good’ at what we do ourselves, who needs direction anyway?

With the Zarb-e-Azb operation underway, airports and other sensitive areas of the country are likely to be targets for terrorist attacks. And it is a miracle that certain international airliners have not closed their operations in Pakistan just yet. But this should not be taken for granted. An elaborate revision of the Standard Operating Procedures (SOP) at all national and international airports is required desperately along with fresh training for airport security staff.

Pakistan has already suffered enough of a loss, anything more would be paralysing.