Bringing FATA into the mainstream 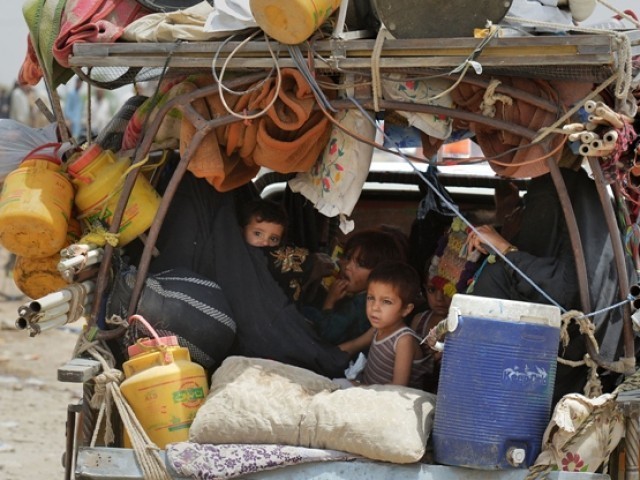 Zarb-e-Azb has already displaced thousands from the war torn region at a time when the refugees affected from previous conflicts and disasters haven’t returned to their homes yet.PHOTO: AFP

The much talked about and supported military operation, Zarb-e-Azb, has been initiated in North Waziristan with the objective of clearing the region from local and foreign Taliban sanctuaries. The military strategy has already displaced thousands from the war-torn region at a time when the internally displaced persons (IDPs) affected from previous conflicts and disasters haven’t returned to their homes yet. Up to 30,000 soldiers are involved in the current operation, while more than 800,000 people have fled the area over security and an uncertain future.

The operation was launched after the failed attempt at peace talks and demands from the military and political leadership to uproot Taliban safe havens in the area. But will the use of force alone be enough to address the problems of the locals who have been deprived of their right to a home, security and basic facilities for decades?

The Federally Administrated Tribal Areas (Fata) include areas along the Afghanistan border which populate around three and a half million people. The area includes seven tribal agencies and six frontier regions. During the British era, tribes living in this area were deemed too independent and difficult, so the colonial power ruled this region indirectly through tribal elders. This system was introduced not to govern as such, but to contain any potential rebellion against the state. After the partition in 1947, this area was inherited by Pakistan with a claim of minimal rule over the territory.

According to Article two of the 1973 Constitution of Pakistan, Fata is formally a part of Pakistan; yet, the region does not entirely follow regular laws and politics. The government of Pakistan has always had little political control in the area and the only presence of the state is through political agents appointed by the federal government. These agents mainly rule through tribal jirgas and on the basis of the Frontier Crimes Regulation (FCR).

In 2013, political parties from the region were allowed to contest in the general elections for the first time. However, their rule would be limited, as according to Article 247 (b) of the Constitution of Pakistan, the elected representatives of the region would not be permitted to make or amend laws for the region. This means that even the elected parties cannot make much of a difference in the depoliticised tribal area.

Fata is left at the mercy of these tribal leaders and a set of rules made by a colonial power to control the people. The area also has alarming illiteracy statistics with only the 30% of the male and three percent of the female population being literate. The numbers in provision to health and basic necessities are also no different. Moreover, continuation of the laws and regulations made by the British is violating the fundamental rights of its people.

Even though the population has been suffering from abject poverty, backwardness and lack of education, these factors never moved the civilian or military leadership as the region didn’t pose a threat to the state, until recently. The region could not be ignored for much longer as the security and political situation changed drastically after the events of 9/11 and the situation exacerbated due to the Taliban insurgency that followed.

The social fabric of the region was completely destroyed as tribal leaders were killed, the political importance of jirgas was forfeited and political agents who used to rule from Islamabad lost the limited authority they formerly possessed. The state tried to clear the insurgents through various military operations, but the blinkered approach by authorities resulted in the resurfacing of militants soon after successive military operations.

The continuous militant insurgency, army operations and drone attacks have created a volatile situation in the entire region, leaving the inhabitants either trapped in affected areas or helpless in IDP camps, suffering day in and day out. Tens of thousands of families have left the area for the nearby district of Bannu. The future of these refugees seems dim and terrifying, with no way out of their deteriorating standard of living.

However, Zarb-e-Azb is not the government’s biggest challenge. It will be facing bigger hardships when the operation is over and when its attention will be diverted (if it will be) towards settling back hundreds of thousands of refugees that left their way of life behind. This will involve hard choices like bringing the area under the country’s judicial system, amendment in Article 247 (b) to empower the elected members of the region, giving media access to Fata, eradication of ‘no-go’ areas in the region and initiation of development projects (especially related to health and education).

Fata is part of Pakistan and is in desperate need of prosperity and development, not only for itself but for peace in the rest of the country as well. Its inhabitants are our fellow Pakistanis who deserve an honourable life. The fate of three and a half million people in Fata lies in the hands of the Pakistani government and it is high time the government starts addressing their needs if it doesn’t want a massive rebellion in the future. And peace is not possible unless and until we mainstream the area.

A public administration bachelor from NUST. He takes keen interest in politics and international affairs. He tweets as @asn615 (twitter.com/asn615)