Living with polio in Pakistan 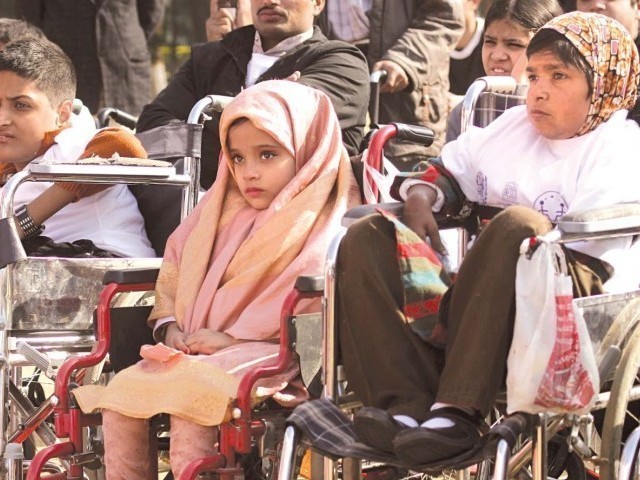 I wish such schemes were introduced during my time so that I would have been able to get an education and lived my own independent life instead of relying on people. PHOTO: FILE

“I always wanted to study but my dream to get higher education remained just that, a dream. I was unable to complete my Matric because of my disability. It would pain me immensely to see girls who were with me in school going to college and making something of themselves.”

Maria, while wiping her tears, was discussing the Khyber-Pakhtunkhwa (K-P) government’s new scheme regarding free education for the disabled.

Maria is 32-years-old and is a resident of Gulbahar in Peshawar. She was diagnosed with polio when she was one-year-old, soon after she got her polio vaccination. She is currently living with her brother as her parents passed away a few years ago.

She told me that she was performing well and is enthusiastic about her studies but broke her right hand thrice during her school days and couldn’t walk properly either. She said that there was no adequately functioning hospital in K-P for polio stricken children at that time.

“My parents had to take me to Lahore for my check-up and that’s when I got my first pair of orthotic shoes. Now they have facilities in local hospitals but the conditions are really bad.”

For Maria and the rest of the disabled people of our nation, living with a disability is very hard since there aren’t any proper facilities or educational prospects for them. According to statistics, there are more than five million people living with some form of disability in Pakistan, with the number of polio patients increasing day by day. Even when people try to curb the disease, their efforts go in vain because they end up being targeted by extremist groups. Due to this, there is a serious security risk for polio workers who want to help the polio stricken children but fear for their own lives as well.

Talking about the rising number of children with polio, Maria said,

“I feel unbearable pain when I see the children from K-P helplessly suffering from this virus. I do not want another child to live a life like mine, a life of misery, sadness and grief. I wish I could go door to door and explain to each of the families how important these two drops are for their child’s life. It’s like your child’s life is in your hands and it’s up to you how their future unfolds.

What they say about polio drops affecting a person’s ability to produce children in false. They’re just rumours. Children in my family have gotten polio vaccines when they were young and they’ve grown up normally, gotten married and had normal babies.”

Maria has been married twice but it didn’t end up working out both times due to her disability. She said,

“If I were educated enough, I wouldn’t have to rely on anyone right now. Currently, I am working as a substitute teacher at a local school where I get a monthly salary of just Rs5,000, which does not allow me to manage my living expenses alone. Even though I am living with my brother, I understand that he has his own family to support. Occasionally, my sisters help me out as well but I feel reluctant to discuss my needs with them.

I wish such schemes were introduced during my time so that I would have been able to get an education and lived my own independent life instead of relying on people.”

There are countless other Marias living a similar life in Pakistan. Our children are our nation’s future. I commend the K-P government for taking such a stand and initiating such a scheme, but now it is time for other provincial governments take note and follow suit. It has come to a point where it is not as much of a choice-based decision as it is need-based.

Even though education remains a priority, the underlying problem is the presence of the polio virus and the lack of health facilities present to eradicate it. This month alone, 220 cases of polio have been reported in Pakistan. According to the World Health Organisation (WHO), Pakistan is at a “tipping point” as the remaining endemic countries in the world, Afghanistan and Nigeria, have seen a significant decline in the number of cases this year.  The number of cases increases by the hour. Yesterday, Wednesday, October 23, three new cases were reported. Today, on World Polio Day, Pakistan has officially broken its 14-year-old record when it crossed 200 cases.

How far is Pakistan from eradicating polio, one might ask? Well, as per the country’s Expanded Programme on Immunisation (EPI), it is estimated to be more than 500,000 children away. This troubling figure is the number of children who have not been vaccinated each year over the past few years for a number of reasons. But there is still hope. WHO Emergency Coordinator for Polio Eradication, Elias Durry, told The Express Tribune, that the county has the capacity work toward a polio-free Pakistan by the end of 2015. He said,

“The upcoming six to nine months are critical.”

As the country is working towards fighting polio and the extremists who are doing their best to halt any hint of progress being made, the need of the hour remains educating people so that polio-infected families to step forward and take the initiative themselves. Provincial governments need to step up immunisation programmes and make sure they are carried out to the end. If that is asking for too much, the least they can do is provide polio workers with necessary security so they can do what the so-called elected-by-the-people-government can do for the people who elected them.

A radio journalist who has worked in development media sector as a media trainer and mentor. She tweets as @swidad (twitter.com/swidad)

Do I have to become Muslim to survive in Pakistan?

In Hangu, are teachers a specie quickly going extinct?