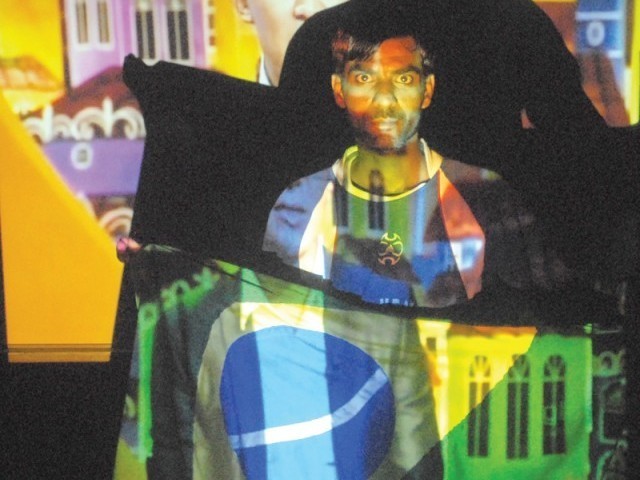 Hundreds of residents of Lyari gathered at the Sarghwad street in Kalri on Tuesday night for the Brazil versus Mexico FIFA World Cup match which was screened live on a projector screen at the roadside. PHOTO: FILE

It is said that things are not always the same on the inside as they may seem on the outside. Don’t judge a book by its cover. The same phrase can be said for Lyari’s current situation. Lyari is one of the oldest and most densely populated areas of Karachi, where people belonging from different races and ethnicities have been living together for years.

However, people need to understand that Lyari’s real identity has been manipulated and the area is wrongly presented as a symbol of terror and fear. It is not as bad as it is portrayed by the media or discussed during dinner gatherings.

In order to realise the normalcy in Lyari, one must visit the locality, especially while the world’s most watched event, the 2014 FIFA World Cup, is underway.

Millions of miles away, Lyari is seen to be portraying a mini Brazil of its own, with every nook and corner of every street decorated with colourful flags of different football teams and pictures of famous football players.

Most of us have heard of areas in Lyari like Kalakot, Baghdadi, Chakiwara and the likes, due to the many operations that have taken place there, but rarely have we ever heard of Football Chowk, Usman Park, Gabol Park, Peoples Stadium, Lyari Football Ground, Eidgah Ground and many similar places.

At night, people gather at these grounds to watch the screening of the matches where big screens have been installed for people to come support their favourite teams in action. You get to see fans waving their favourite team’s flags, wearing jerseys of their favourite players with flags of their teams painted on their faces. One can say that they have a special traditional style and distinct culture. They start dancing on the echo of a special type of instrument, which is quite famous there. Every single goal sends them into an enthusiastic frenzy, especially if scored by their favourite team.

Brazil is an all-time favourite there, with motorbikes, houses and offices covered in Brazil’s flags. Germany, Portugal and Argentina follow suit. In terms of players, Lionel Messi, Cristiano Ronaldo and Neymar are liked the most; so much so that you even see young fans sporting Ronaldo’s signature hair style.

The extent of their love for this sport can be judged by the fact that, even before the match between Brazil and Mexico started, a rally was arranged without the supervision or inclusion of any political party, where the supporters danced and hooted for their favourite teams.

This under-privileged and misunderstood area is amazingly talented. Not only in football but the people of Lyari are equally talented in other sports as well, like cricket, cycling, donkey cart race, karate, boxing and various others. One will find many sports clubs and gymnasiums that are operated without any government assistance, where sportsmen train themselves. That is the reason there are a whole lot of sportsmen that have emerged from Lyari and the kind of enthusiasm these people have for sports is palpable. I wouldn’t be surprised if someone said that the greatest sportsmen came from Lyari.

I know that when you hear the word Lyari, the first few things to pop into your mind are civil war, thugs, gang wars, dangerous but this was my attempt to change the way Lyari is thought about. There are places and people who have hidden talents that don’t meet the eye, but if you search hard enough, you will realise that even a place like Lyari is gifted. It is so much more than just gang wars, guns and terrorism. Don’t believe me? Go see for yourself, visit the streets of the area and see how the people over there are full of life.

A blogger who studied from the Federal Urdu University of Arts, Sciences & Technology (FUUAST), he emphasizes upon prominent issues related with society and university life.