Where did Shab-e-Barat go? 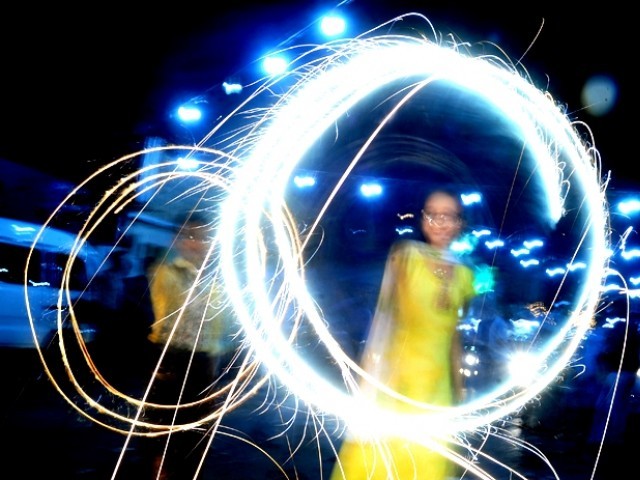 Shab-e-Barat used to be my favourite festival. Yes, ‘festival’ and like all festivals, Shab-e-Barat was entertaining, fun and spiritual. And for a crazy kid growing up in Lahore during the 80s and 90s, it was probably a little adventurous and unsafe too.

The local marketplace would host tens of stalls selling all kinds of fireworks known to man. All the kids in the neighbourhood would save their pocket money for months to be able to buy their fill of patakhay. The most popular fireworks included the Anaar (a fountain of fireworks), the Hawaiyaan (rockets) and the Bum (bombs, but not the kind that would explode and destroy half a city block, unlike the Bum nowadays).

The firework of choice for the little ones was always the phuljharri (sparkler); it was safe and fun to just wave around. Kids who could wave the phuljharri fast enough would be able to create a beautiful ring of fire and smoke, crackling and hissing away into the night.

Along with this, the teenagers in the mohalla had their fair share of prankster fireworks, with the most popular one (and my personal favourite) being the Chooha. Once lit, the Choocha would zip around the ground at lightning speed while emitting a high pitched scream. And, if you are really lucky, the Chooha would find its way up the dhoti of an unsuspecting grandfather, resulting in a lot of laughter and maybe slightly bruised pride. Another mischievous patakha was the Klashenkoff, which would sound exactly like a burst of machine gun fire and send people diving for cover. Back in the day, when things were peaceful pranks like this were always fun. I don’t think they would be as funny today because of the very real threat there is.

Many fireworks would never ignite properly, dying with a mild hiss. This is how the term phussi bum came into being, which an entire generation now uses when they want to refer to something that doesn’t work correctly.

Lighting up the house was also a tradition. Some people would put up candles, others would put up electric lights… but the undisputed winners would always be the Safdars in our area. They would encircle the entire outer perimeter of their house with beautiful oil lamps. As the night wore on, children would run out of fireworks and the candles on the walls would melt, but the flames of the lamps at the Safdars’ place would continue dancing into the wee hours of the night. Everyone in the neighbourhood, including myself, envied those beautiful lamps.

Friends and family would get together to play with fireworks, admire the lighting, enjoy delicious food and at the end of a fun-filled day, we would spend time praying and thanking God for all the things he had given us. Shab-e-Barat was a fun-filled religious festival, with strong influences of sub-continental and Islamic cultures. It was a centuries old tradition. Shab-e-Barat was fantastic.

Until it all stopped happening.

I was in Lahore last Friday and someone had to remind me that it was Shab-e-Barat. There were no fireworks. I didn’t see any children with phuljharrian and noticed no dhoti-clad grandpas running for cover. There were no festive gatherings, no candles and, worst of all, no lamps at the Safdars’. And it’s not like the celebrations were subdued or lacked fervour – there was nothing.

The next day, Facebook was filled with hundreds of posts about Father’s Day.

I believe that values and traditions don’t have to be ‘defended’. If they have substance and capture the people’s imaginations, they will survive and grow. If they are weak, they will wither away with time. I would have loved to see my children enjoy Shab-e-Barat the way I used to, but I don’t think that is going to happen. Even if I make the effort to find fireworks and get my kids to play with them, it will be no fun unless the whole neighbourhood is involved. The tradition of fireworks, lamps and the fun that made Shab-e-Barat a festival has just… died.

I think it’s important that we take a moment to ponder over why this has happened.

There was always a group of people who did not appreciate the association of lamps, fireworks and fun with Shab-e-Barat. They felt that Islamic traditions needed to be ‘purified’ by ensuring that we do things exactly the way it was done 1,400 years ago. They strongly felt that adding to or any kind of innovation of any aspect of a religious tradition was bida’at, which is wrong. It seems like their puritanical approach worked. They successfully killed the festive innovation of the local event and for some it is just another day that we put down in our calendars.

Other conservatives thought that the ritual of lighting oil lamps and fireworks were emulated from Hindu traditions originating from the festival of Diwali and should be abandoned. They would look towards other prominent Muslim countries for inspiration.

Historically, Pakistanis have held fast to their Islamic beliefs, all the while letting local and regional influences enrich their religious traditions. Shab-e-Barat was an example of that, where some fun and fireworks were added to a night of prayer, to make the event our own. But not everyone was okay with this infusion, and looks like they finally won.

Yes, maybe with the increase in terrorism, people have become more susceptible to panic, and a night filled with fireworks sparking through the air is the last thing Pakistanis need right now. But perhaps, if we had just stuck to fireworks all along, we wouldn’t feel the need to panic.

Or is the reason we have drifted apart from Shab-e-Barat the fact that we traded eastern traditions for western ones, where celebrating Shab-e-Barat is not important anymore while Father’s Day has become an event of consequence?

It could be any of these reasons.

For now, I just wish someone would tell me where all the lamps went…