Flood relief: Does any one still care? 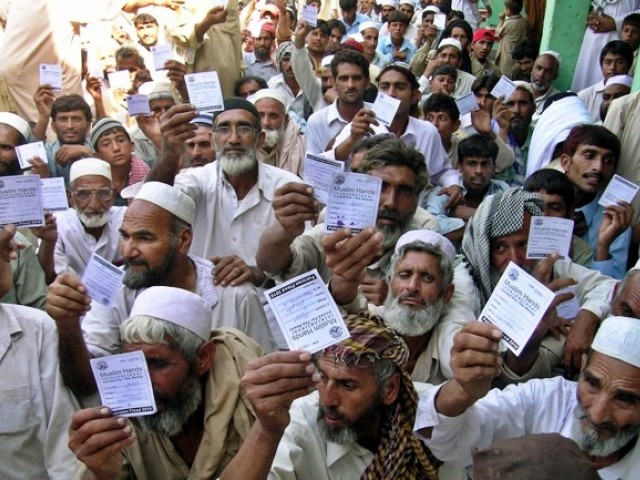 Millions continue to await for assistance in flood affected areas

It has been a few months since floods ravaged one fifth of Pakistan. Immediately, massive campaigns were launched to collect money and supplies to help victims. But slowly, this spirit has died down. Now there are  just a few reminders every now and then that survivors need your help.

So what exactly happened?

And how the hell have we all just come to terms with one fifth of our countrymen being homeless and living off international donor assistance?

Well, there are a couple of things that happened that led to this. Firstly, from day one rather than talking of rehabilitation and future assistance, the government was going on and on about collecting enough money to help them through the holy month of Ramadan. This message indirectly portrayed that your money is going to help the victims and you should come forward and contribute.

How much aid is just too much?

What the government and other agencies were ignoring at this point was the common phenomenon of exhaustion. In simple words, people only have a certain amount of money, and once they have given it towards a cause, they assume they have done their part and are not related to the issue any longer – in any manner. This exact thing played out across the country and left the flood relief effort is a dangerous position, as in the initial amount of money coming in eventually dried up as people gave away as much as they could and then moved on. Any expert would tell you that for a relief effort this is the most dangerous thing that can happen, i.e. people thinking they are done playing their part.

The thing is – the flood victims never really needed just money, they needed support. That means they needed people to help them by training them for jobs, providing them therapy for the trauma they have suffered and providing makeshift schools for their children to teach them skills that would eventually help them get jobs. But instead of this, what the flood victims got was a raw deal; not only were they eventually pushed to the back of newspaper pages but the help they got was based on half cooked planning and execution. Apparently, the plight of thousands of families is not as interesting or newsworthy as the return of former president Musharraf or the latest Supreme Court ruling that affects no one except a few hundred people at best.

The millions you saw on TV (are still out there)

At this point, we need to refocus our attention on this issue again. Just a few months ago, this nation promised flood victims that we would stand by them and help them get back on their feet. We didn’t just promise them money, we promised them support.

To begin with, ideally, the government should sit down and for once come up with a decent strategic plan on how the victims are going to be rehabilitated and reintegrated into the society. In addition to that, international donor agencies should share what they are they exactly doing with the people of Pakistan in Pakistan in regards to this relief effort, how much money is being spent and where is it going. The point is, all stakeholders including the people affected by the floods and the general public of Pakistan need to be on the same page on how the relief and rehabilitation efforts are going while clearly knowing who is in charge of these efforts.

For the next two years, HEC can make it mandatory for all Bachelors’ students to spend at least six weeks as part of the flood relief effort that would be counted as their internship for their degree. This would provide the workforce needed to help the flood victims by teaching them new skills, helping them put up their livelihood businesses and even starting cooperatives. But most importantly, it would be a great way to remind everyone that it is an ongoing effort to rehabilitate the flood victims.

Most importantly, media needs to actually play a half decent part as part of the flood relief effort. Rather than just reporting on it or collecting stuff to be sent to the areas the media should actually cover this issue on a daily basis. If they can just take out 5 minutes of the nightly news time from the dog and pony show in Islamabad to give to the plight of these victims, they would be playing the role they are supposed to play.

All in all, as a nation we did a fairly decent job initially for the flood victims, but now we are just getting sloppy, we need to get back to it as a serious task of national importance.

Because that’s exactly what it is, a task of monumental national importance.