Will Zarb-e-Azb bring peace to Pakistan? 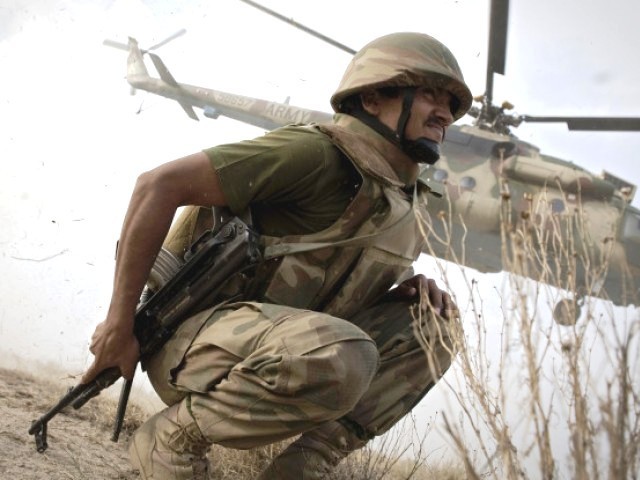 All exit points from North Waziristan Agency have been cordoned off and the Taliban are not being given any opportunity to slip to adjacent areas and elude the fire. There is a growing impression that the Taliban have been cornered. PHOTO: AFP

After much dillydallying, useless discussions and utterly unsuccessful peace talks, Pakistan has, finally, launched a “decisive” operation, code named Zarb-e-Azb, against the Tehreek-e-Taliban Pakistan in the North Waziristan Agency.

The Pakistan Army claims that around 180 Taliban have been killed so far, with dozens other captured and their safe havens and ammunition depots taken out, in jet bombings and face-to-face skirmishes. All exit points from North Waziristan Agency have been cordoned off and the Taliban are not being given any opportunity to slip to adjacent areas and elude the fire.

There is a growing impression that the Taliban have been cornered.

However, the TTP disputes these claims.

Through a telephone call to BBC Urdu Taliban spokesman, Shahidullah Shahid, claimed that so far they have lost just a few fighters and that civilians are being targeted in jet bombings.

As usual, the main collateral damage in this operation is the local population. The Wazir and Dawar tribes of the North Waziristan Agency have been forced to move to adjoining agencies. So far, some 20,000 people have migrated to adjacent areas of Khost, Paktika and Paktiya provinces of Afghanistan where the Afghan government is reported to have allocated roughly 4.04 square kilometres of land for the tribesmen. Thousands other have migrated to nearby districts of Khyber-Pakhtunkhwa, like Bannu, Lakki Marwat and Karak. An approximate 0.6 million people are expected to become IDPs. Camps have been established for them in Bannu district. This time, the government has decided to give Rs7000 to each family, instead of providing them with relief goods.

Like the Swat operation that took place in 2009, this operation is comprehensive, politically owned by the government and backed by all major political parties. Pakistanis have attached very high expectations to this operation and are hoping to achieve endurable peace as a result.

This operation will definitely bring some positive changes, yes, but, I think it is unrealistic to hope for sustainable peace from an operation like this. Peace needs a lot more than just a military fight.

Also, there are many reasons why this operation might not even be as successful as it is deemed to be.

First of all, this operation was launched after much hue and cry, which might have hinted to the TTP that a storm is coming their way. It is not only understandable – it is highly probable – that the Taliban migrated to safer places in order to survive the operation. They had already claimed, a few days back, that they have displaced their assets. So, the probability of the army attacking a major portion of the TTP is very low.

Even if they have not been allowed the opportunity to leave the agency, as claimed by the army, it is almost impossible to completely seal the harsh, hilly terrains in the areas, especially when there is a 2400-km-long, almost unmanned border with Afghanistan. In unconventional wars, such guerrillas don’t ingeniously dare to face an established army; they go underground and, later-on, connect with each other, re-establish communication lines and then start their activities again.

In such operations, an established army is always expected to gain significant success – in terms of reclaiming lost territory, that is, in the very first few days of an operation. While this is, and should be seen as, a victory, militants usually wait for a period of relative calm to prevail so as to make the army feel like it has won and then strike back.

This is what we witnessed in case of operations like Rah-e-Rast in Swat (2009) and Rah-e-Nijat in South Waziristan (2009). Recently, we heard that military personnel have been attacked in Swat and a curfew has been imposed in many districts there. And even after so many years, the Mehsud tribe of Swat have been unable to return to their homes. So, in my opinion, don’t pin your hopes on the initial success of the operation; it does not matter much.

Irrespective of how successful this operation is, the major concern right now is to see how long the Taliban will be kept disbanded, how much time this operation will take, how many of them will be physically eliminated, whether their leaders will be taken out or not and, last but not least, for how long the IDPs will be required to remain in camps. These are very pressing questions that need to be answered.

As far as the survival of the Taliban is concerned, that is inevitable.

They will survive, don’t doubt that. The army is only targeting one agency, while they are very much at large in other agencies and the remaining parts of mainland Pakistan. Their leader Mullah Fazlullah and other senior commanders are allegedly living somewhere in Afghanistan, which means the current operation cannot completely root out terrorists from Pakistan, as we are asked to believe.

The army, however, is cognisant of the different aspects of the Taliban’s survival strategies. In fact one of the main reasons for the delay, in the North Waziristan operation, was because the army believed that the Taliban could cross the Durand Line into Afghanistan; there, it was believed, they would be taken by other intelligence agencies and used against Pakistan. Pakistan is trying to deal with the Taliban within its territorial boundary.

Mullah Fazlullah evaded the Swat operation, crossed into Afghanistan and, in later days, became an even greater leader. Pakistan alleges that he is facilitated by Afghan intelligence agency NDS (National Directorate of Security), though Afghans reject these allegations. If he manages to slip into Afghanistan once again, then it would mean that Pakistan will face even more ruthless terrorist attacks in the coming days.

If the Taliban are not dealt with a fatal blow in the current operation, it will not take them more than two months to get back on their feet. In that case, it will become very difficult for Pakistan to eliminate them, as it is not easy to create such a favourable environment and render such sacrifices continuously. People will stop believing in the significance of a military operation.

I consider this operation the last major operation against the Taliban. We do not have the resources or the money to conduct such an operation in the future; it is high time every Pakistani realises that they need to back the efforts of their soldiers today more than anything else.

In this context, I believe that this operation is not going to come to an end soon. Government officials are pledging it will end before the month of Ramazan (which means before July). In all likelihood, this operation is going to be perpetuated and, in corollary, the IDPs will have to stay in camps. I fear it may take Wazirs and Dawars years to return to their homes, just like the Mehsuds.

Aside from the above mentioned complexities, another major flaw in this operation is that, as usual, it is only against the bad Taliban, like the TTP and affiliated al Qaeda fighters; good Taliban, like the Haqqani Network and Gul Bahadar group are to be spared. Such a discriminatory approach to terrorism in itself perpetuates the problem. It halts the creation of counter narratives, confuses the masses and blurs the enemy. For endurable peace, Pakistan has to bring notable changes in its strategic calculus; it has to give up intentions of interference in its neighbouring countries.

The Zarb-e-Azb operation may stop terror attacks from occurring in the major cities of the country but it cannot help in bringing peace to the ill-fated Pakhtun land, which has been experiencing ruthless terrorism for decades. Peace in the Pakhtun land should have been the priority of Islamabad but unfortunately, it is not so. Such discriminatory operations are seen by many as efforts to contain the terror within the conflict zone and acquire peace for the bigger cities in Pakistan only. This discrimination has to end if endurable peace is to be maintained.

However, the above description does not mean that the Zarb-e-Azb operation will achieve nothing. It will disband the TTP for a few months, stop attacks in major cities and will bring down the otherwise increasing graph of kidnapping and extortion in K-P and FATA. It will also assuage the anger of all those families who have lost their loved ones in terrorist attacks. But it cannot bring long-lasting peace.

A graduate from the Government College University Lahore. He enjoys writing about AF-PAK and matters related with the Pakhtuns. He tweets @khetranazk (twitter.com/khetranazk)