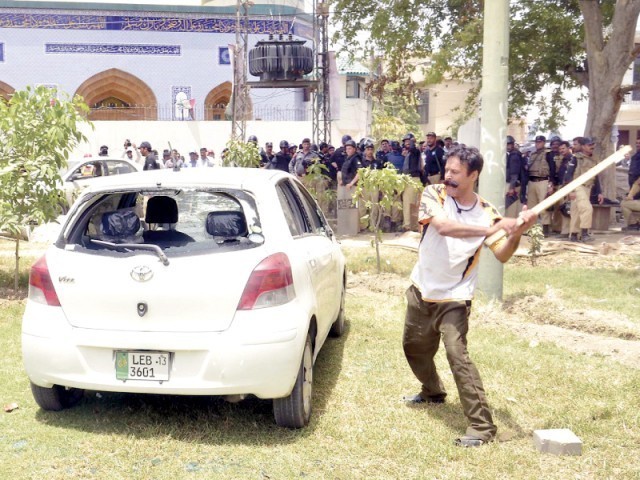 Gullu Butt breaks windows of a car during the clash between police and PAT workers. PHOTO: INP/FILE

There came the sacred, exalted goon, smashing the cars in an invincibly high spirit. Behind him stood hundreds of baton-loaded policemen, entrusted with the protection of our life and property, silently appreciating the heroics of Gullu Butt.

Somehow, those pictures of Butt and the police symbolise the ugly facet of our national politics abscessed with the misuse and abuse of power.

The likes of Butt, who has been identified as a PML-N worker, represent the kind of mindset that exists throughout the ranks of conventional political parties; the mindset that considers power a tool to subvert and supersede the law; the mindset that reverts to the excessive use of power to perpetuate its dominance.

The ruling party, Pakistan Muslim League-Nawaz, apparently, trumps all others in portraying a practical display of that mindset. Not so long ago, media channels showed the visuals of an MPA from Faisalabad beating a doctor who did not stand up to greet the former. And how can we forget the presumptuous bakery guy in Lahore tortured viciously by our chief minister’s daughter’s guards upon refusing to sell her the cake.

Historical precedents do not tell otherwise either. In 1997, the unruly PML-N workers attacked the Supreme Court building and chief justice of the time when Nawaz Sharif was expected to be held guilty on the charges of contempt of court.

The other appalling aspect of the Butt episode was the by-standing police officials which highlights the sorry state of our institutions. Respective governments, including the incumbent one, have developed a serious tendency to bypass the democratic principle of separation of powers. The use of state institutions, like the police for political benefits by the political elite has left a vast majority of population vulnerable.

Blurring the distinction between party workers and public servants has rendered the latter incapacitated, unable to fulfil its due role. It is excruciatingly ironic that the police who undertook the operation on Tuesday, which took eight lives, stood silent when Farzana Parveen was being stoned to death and when two brothers in Sialkot were lynched.

Butt is merely a face; the tragedy is far bigger than him. The tragedy is the mindset that considers power to be a certificate of untouchability. This mindset has seeped through our political strata. Before more damage is done, this mindset needs to die.

A political science student at Lahore University of Management Sciences(LUMS) who likes to write on local Politics and International Affairs.