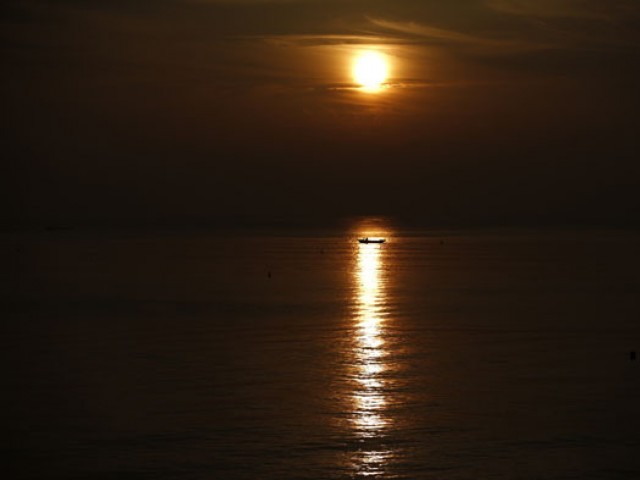 When a man takes a stroll inside his self, are you the one that trips him, so he can travel onwards with a shattered ego? PHOTO: REUTERS

In the centre of a wave of silence, where I sit inside a shed, You are the tools that I have used to build this home. When people debate about You, You sneak into the smile that travels across my face. You are in the noise that is aroused but more so in the silence that follows. Because what is every word but a pointless effort to imitate the sweet pleasure which roams casually inside silence?

Your name is constantly provoked in different forms, in different accents, and You are denied in different languages, in different ways. Lives are spent in defending You, in attacking You, but where are You? Are You lurking in the varying pitch of their voices? Or are You in the spaces between the words that attempt to describe and deny You?

Everyone claims to know You, to understand You. Yet, You refuse to display Yourself. Do You slip away into the dark corners of curiosity in the eyes of the child, who looks at two arguing poles stuck in a ground, mistaken for cement? Why do You love to hide? Why play these games?

Why place such heart-wrenching beauty in man and in nature? When the leaves converse with the gusts of wind, and the trees shake with zeal, what is it that they talk about?

When a child laughs, is it You that attaches our heart with the pitch of his laughter? When a man cries, are You in the dried up streams that are left on his face?

When a lover awaits his beloved, do You request time to alter its movement? When seas of blood are spilled, how do You digest all of it? Centuries have passed, and it has been asked, what do You want from man?

To uproot his existence and forever plant it in different fields? To grasp the infinite streams of light with his fingers? To keep a lid on the abyss of darkness that he has been handed by the society?

Why this love for such bizarre riddles? Why these choices?

When the ego is shattered, are You in the blood that drips from collecting those shards? When poets pen a thought, are You somewhere in the eruption of pleasure that arises inside us? When thoughts travel to reach You, do You smile at the distance they have to cover to come back to the starting point?

When painters paint, are You taking cover in the palette? When a voice sings, and the heart floats with the varying notes, do You uphold the elevation? When people are hanged for loving You and hating You, what do You feel then?

When a man takes a stroll inside his self, are You the one that trips him, so he can travel onwards with a shattered ego? When a spider constructs its web, are You in the fragility of the architecture? When a snake is able to shed off its skin, and a man isn’t, what do You think then?

When tears well up inside the heart, is it You who has shut off all the taps of illusion and speculations? When a man showers in the warm certainty of his thoughts, are You somewhere in the cold uncertainty that surrounds him?

When people fear death, are You disappointed in how little they understand life?