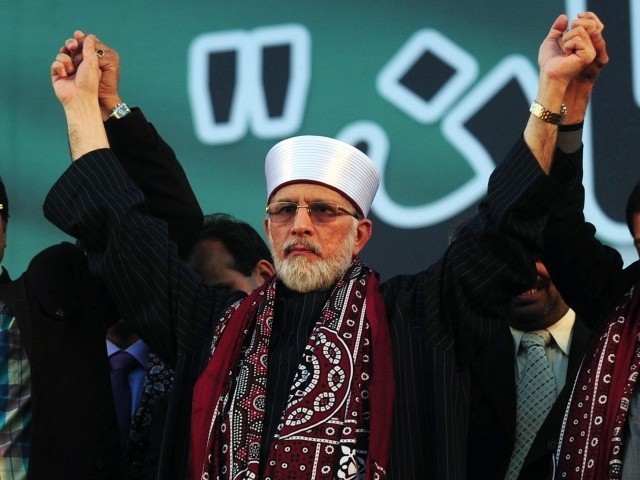 Why is he ignoring his own people’s action in this tragedy that has gripped Lahore? Dr Qadri, your people are not in the right; you are not the victim here; your party is not the only one that has experienced losses. PHOTO: AFP/ FILE

Dr Tahirul Qadri plans to come back for his yearly visit on June 23, 2014. Now all of us are aware of the security given to our politicians – everyone is the president and treated like royalty with the area, surrounding their house, being cordoned off and protocol all around. Life as we know it, comes to a standstill for all those residing nearby. An utter nuisance.

Dr Qadri’s case is no different.

The only difference is – he isn’t even in the country yet.

Earlier today, upon receiving multiple complaints from people residing around the Dr Qadri’s mansion about the barriers being an inconvenience, the Lahore police set out to perform its duty and have the illegal barriers removed. As per court orders, it is illegal to block streets for any security reasons.

At this point, supporters of the absentee leader refused to comply with police instructions. Soon enough, this little tête-à-tête turned into a full-fledged bloody conflict with eight people pronounced dead and over 80 injured.

The fact that this incident took place is preposterous. Especially when the security situation in the country is so sensitive and the country is on high-alert due to the operation taking place in North Waziristan.  Not only did this fiasco challenge the strength of the police, it was in complete disregard of the other residents surrounding the area and the country’s rules. Had the PAT supporters let the police do their job, the situation would not have spiralled out of control resulting in the loss of lives.

Being a political party, under the regime of an elected government, whether they like it or not, the PAT has a responsibility towards the nation and the government. Acting out in such a manner demonstrated the height at which supporters of political groups are willing to go in order to achieve their objectives – legal or not.

Dr Qadri, being the leader, went on to tweet that,

The Punjab police is stating they are stopping the innocent workers according to law, they are lying. #StateTerrorism

According to Dr Qadri, the officials in power are,

“Busy collecting the privileges and forgetting that they need to worry about country’s security and sovereignty”.

As true or false that statement may be, the irony is unmistakable. Political leaders have a strong influence over their followers and the fact that supporters were allowed to challenge the writ of the land in the way that they did is and should be unpardonable. Instead of handling the situation, Dr Qadri provoked them further. This protest was not worth the lives of those eight people. Eight lives were lost and will only be used as pawns in an already weak argument.

In his press conference today, Dr Qadri said that he believes the government is taking revenge from him because he stood by the army while its media trial was taking place. He further added that he is against all the people who entered the boundaries of his house and no one was there to stop them.

According to him, there are dead bodies lying outside his house, which the media isn’t showing. He thinks that the media is portraying a biased picture by only showing the chaos. So, in other words, Dr Qadri is not only portraying himself as the victim but also accusing other institutions of working against his party.

He stated that it was the government and police causing the disruption and not his party supporters. But I strongly disagree.

No, Dr Qadri, your people are not in the right; you are not the victim here; your party is not the only one that has experienced losses. In fact, it is because of your supporters’ actions that even Karachi, which is miles away, is being affected by this grotesque misuse of power.

This incident was tragic, no doubt about that. People have died, and their loss should be mourned. But if we are playing the blame game, then Dr Qadri, the blood of those eight lives is on your hands.

Correction: This piece earlier mistakenly stated that Dr Qadri stood ‘against’ the army – the error is regretted and has now been rectified. Our apologies for an inconvenience caused.

She has a Associates degree in Administration of Justice from Cerritos College, California and currently an undergraduate student at California State University, Los Angeles. Her interests include reading and writing investigative stories.

Has Pakistan forgotten what Ramazan means?