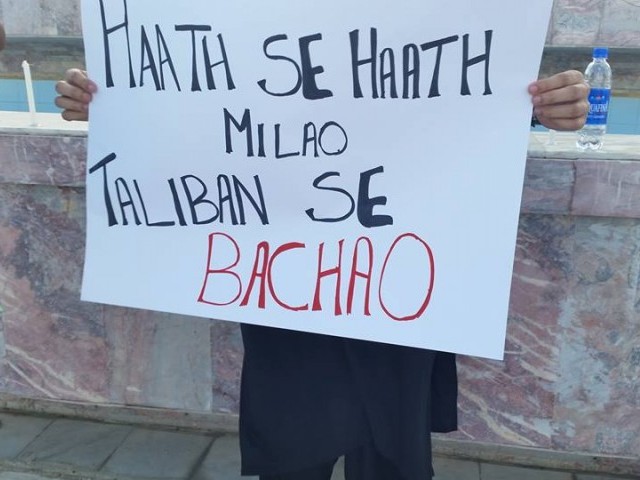 In my opinion, what we did was absolutely necessary because the government needs to know that we are watching and we will hold them accountable. PHOTO: CITIZENS OF PAKISTAN FACEBOOK PAGE

I promise this blog will not bash Pakistan Tehreek-e-Insaf (PTI).

My stance on the Tehreek-e-Taliban Pakistan (TTP) is extremely straightforward. I strongly feel there is no room for negotiations because there is simply no middle ground. There is nowhere that the TTP can be met halfway. They have two very clear demands – Pakistan must break off all relations with the United States and Pakistan must accept their version of Shariah law.

The first demand might be a matter of foreign policy, but the second is a matter of lunacy. How would these negotiations even go about? What we can do is ban music but can’t ban women from driving cars? There are so many aspects to their version that we really can’t apply in the 21st century.

And let’s not forget that the TTP feels all minorities from Shias to Ahmadis to Hindus to Christians, all are targets. Now, will we give up a piece of our country and gift it to TTP to rule so that they may impose their practices openly on a few Pakistanis before moving south more than they have already?

Another reason why it is impossible to maintain that middle ground is because TTP is unreasonable and not trustworthy. We have seen them, time and again, dishonour peace deals by using that time to consolidate, regroup and then strike back.

Regardless, what is truly beyond reason is that these are the same people that have openly and boastfully admitted killing thousands of our innocent men, women and children. They have beheaded our brave soldiers and attacked hospitals, schools, shrines and places of worship. I, for one, can never come to terms with what they have already done or even consider dialogue – as the thought is cowardly and treasonous. The TTP is a force that must be crushed, not appeased.

On June 8, 2014, when the entire world’s attention was on Pakistan, since Jinnah International Airport was in Karachi, the largest airport of Pakistan in the largest city in Pakistan, was under attack, I realised, and some of my dearest friends agreed, that we were done discussing the issue in drawing rooms. I would consider myself wajib-ul-qatal if I fail to mention my Shiite brothers and sisters that were killed the same day by terrorist outfits.

A day after the attacks, we created an initiative called #FlightTerrorism and our aim was to non-politically pressurise the government to stop negotiating and take stronger action against all those that have been found responsible for aiding, abetting and committing terrorism, may it be the TTP or any other illegal organisation. It is important to mention that this was more my brilliant and dynamic friends than me.

The demand is simple: We do not want the government to consider any organisation, involved in terrorism, as Pakistani or as a stakeholder in Pakistan’s matters. We plead the people of Pakistan to put aside religious differences, sectarian issues and ethnic rivalries, and come together as ‘citizens of Pakistan, to fight for a unified and secular country.

In a matter of days (four, to be exact) we organised a vigil in honour of those who have lost their lives to terrorist acts, especially in the June 8 attacks, and what a demonstration it was.

We were basically just a bunch of kids (some of us extremely tired and sleep deprived) who woke up on a Saturday afternoon, made some banners and placards with antiterrorism slogans and slogans supporting our brave armed forces, rented a mobile speaker system to play music, and decided to hang out at Do Talwar Chowrangi till Maghrib.

The feelings I had that day were magical!

We were singing Jazba Junoon, asking people to join us by calling out to those in the cars around us; we were fighting terrorism, in our own, small way. Important to mention here is that no roads were blocked and nothing disrupted the traffic or the daily routine in that area.

By Maghrib, after a number of people – including women, children and families – had come and gone and demonstrated with us, we concluded the event by attempting to light candles (failed miserably), sang the national anthem, observed a moment of silence for the brave, and obviously yelled out a few ‘Pakistan Zindabad!’ chants. They always do the trick.

While it was great having people we didn’t know join us and unite for a common cause, it was a little disheartening to realise that a lot of people we expected to see were a no-show. A lot of people see protests or demonstrations as pointless, and it may be valid, but in situations where there is little an ordinary citizen can do, such steps, in my opinion, can be very important. When people step out of their houses and on to the streets to protest, the government sees that and realises that the public is demanding accountability.

In my opinion, what we did was absolutely necessary because the government needs to know that we are watching and we will hold them accountable. Even for the protestors, I am sure this demonstration reminded them of how much they love their country; it definitely reminded me and also made me realise that I have duties as a citizen and I need to fulfil them. Every little thing counts.

The success of our demonstration should not be measured in numbers. Passers-by gave us a lot of encouragement and responded well to the demonstration. People read our signs, honked at us and gave us the ‘thumbs up’, rolled their windows down and told us they were proud of us. Many got off and joined us. The message had reached, the people had noticed and we had made our point. That’s how I know we were successful.

While these activities made me ecstatic, I felt quite the opposite the night before. In trying to spread the word, I started to send private Facebook messages to friends on my list. I did a lot of copy pasting and sent a lot of messages – and I mean a lot! Sadly all the messages I sent were ignored. I can’t lie. It did hurt.

During the protest, I tweeted everyone, from Shahid Afridi to Bilawal Bhutto to Sharmeen Obaid Chinoy, to let them know what we were up to. Some people were very kind and responded, others didn’t. Actually, a majority did not. Elie Wiesel once said that the opposite of love isn’t hate, but indifference. Disagree with me, argue with me, attempt to change my mind, but please do not ignore me.

One of the reasons behind the indifference could be that many of us argue (as I mentioned above) that protests take us nowhere. We are indifferent. We refuse to do anything (Shout out to Imran Khan for making people falsely believe in change and then destroying their faith in patriotism. I was lying. Do you think I can do anything without bashing PTI?)

Anyhow, we have become apathetic and are anything but resilient. Stubborn maybe, but not resilient, and this is extremely toxic as future prospects look extremely dim with a youth that is desensitised and hopeless.

But I’m hoping things will change now. I’m hoping that due to our protest, people will realise that little steps matter; that, as citizens, we have a few ways to contribute and we should do what we can.

My request to my countrymen is for them to realise that, as citizens of this beautiful country, we need to step up and say something about the state of our affairs. Our country needs us and it is time to accept our responsibility as citizens and do something about it. The state has not been protecting us, might not be doing the best job, but now it is our time to hold ourselves accountable for being quiet for too long.

Enough is enough! It is time to take back what is drenched in the blood of our ancestors!

It is time to support our brave men and women in uniform!

It is time to take back our country!