Go ahead, beat up the woman, they do it in Indian movies too! 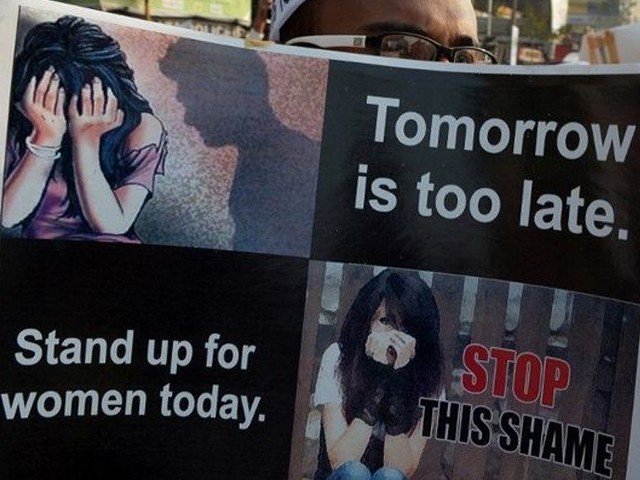 The male psyche in India continues to consider women worthless and lowly despite the country’s rise to the status of the third largest economy in the world. PHOTO: AFP

The incident, in which a female bus conductor in India was beaten up, on June 6, only proves that the country has learnt from history that it has learnt nothing from history. Even after the global hue and cry over the gang rape of the student in 2012, the Indian male populations’ attitude towards women hasn’t undergone any significant transformation.

In fact, it has gotten worse where even the politicians are desensitised to the extent of calling rape ‘right in some cases and wrong in others’, as stated by Babulal Gaur, the home minister of Madhya Pradesh.

Given that caste mentality still rampant in India today, this probably means that rape is ‘right’ when it occurs to a woman of the lower caste and ‘wrong’ when the victim belongs to a higher, more acceptable class.

A number of reasons stand out when attempting to assess the possible reasons behind the grave desensitisation to rape in India. For instance, if the caste system, and the humility that this class is subjected to, makes every injustice towards them correct, it will be a long time until the Indians get anywhere in getting legislation related to rape acted upon by the population. While the politicians duly devise legislation to control the menace, the policemen directly concerned with registering the cases and moving them forward, duly refuse to do so.

If any legislation regarding rape in India had really been effective, the guy beating up the bus conductor would have had second thoughts. Also, none of the male passengers came to help her. In fact, the conductor from the other bus who came to her aid was also a woman.

All this goes to show, and reiterate, that the male psyche in the country continues to consider people from the fairer-sex worthless and lowly despite the country’s rise to the status of the third largest economy in the world. Obviously, the culture has yet to catch up with the economic boom.

The Indian law professor Ratna Kapur calls sexual violence in India an ‘epidemic’ where ‘women will continue to be nothing more than disposable lives’. According to the Times of India, 95 per cent of women in Delhi and nearby areas do not feel safe outdoors.

The general male psyche in the country not only includes the population but, sadly, encompasses the politicians of the country as well.

In yet another case, two girls from an ‘untouchable caste’ were raped at night when they ventured into a nearby field of chili plants to answer the call of nature. The next morning, they were found hanging from a mango tree.

In fact, when a journalist broached the topic in front of Akhilesh Yadav, the chief minister in Uttar Pradesh, he responded saying,

“You’re not facing any danger, are you? Then why are you worried? What’s it to you?”

Yadav’s father, Mulayam Singh Yadav, had a similar callous attitude towards rape and made headlines for himself when he airily commented on the subject of rape saying,

“Boys will be boys. They commit mistakes.”

Assessing the failure of the country’s legislative machinery to control female abuse and violence in the country, Amnesty International cited outdoor toilets to be a major contributing factor. The shallowness of this suggestion needs to be debated when weighed against the enormity of the crime of violence against women, whether it is rape or bride burning.

If, however, one really were to play the blame game here, then Indian media, especially Bollywood movies, would be squarely responsible for their inexcusable contribution to this heinous mindset.

With all these acts of extreme violence against women in India suddenly gaining global attention, there is a deeper need to analyse how it reflects that sexual dominance, always known to be present in the Indian culture, is also heavily laced with extremely violent tendencies. These same tendencies are heroically exhibited in Indian films and hence, adopted with fervour by the youth. Sadly, this is not only adopted in India but also across the border in Pakistan.

According to Steve Derne’s in-depth study of Hindi films produced between the late 1980’s and the early 1990’s, Indian movies not only legitimised but also ‘eroticised’ sexual violence. Derne’s interview of Indian men on their views of romance revealed that female submission, even if violent, was idealised by 76 per cent of the respondents on the basis of images seen in the Indian movies and television. Even romance is violent because the women on screen ‘crave’ it. Hence the men assume that the women on the streets crave the same.