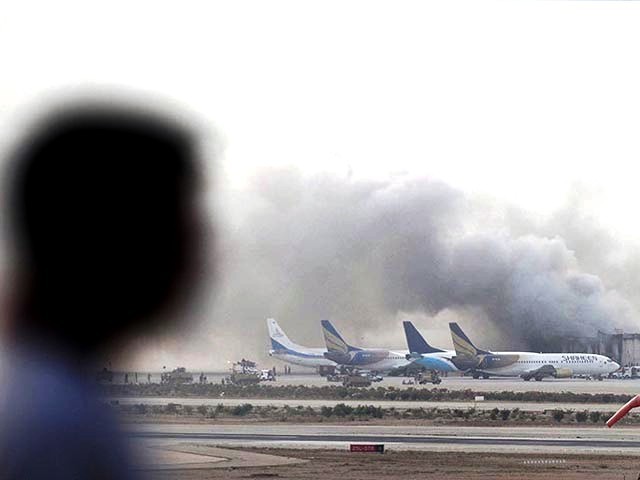 A man watches as smoke rises after militants launched an early morning assault at Jinnah International Airport in Karachi on June 9, 2014. PHOTO: AFP

The story developed like a gathering storm. First there was news of a security breach when some armed men cut through the fence from the ‘Fokker gate’ near the Ispahani Hanger, close to the Pehelwah Goth area which had already been cited as a security risk many times.

Television audience was just trying to catch its breath over the horror unfolding in Taftan, on the Pak-Iran border where over 23 Shia zaireen lost their lives to a suicide attack, in a manner that has such a familiar, horrible ring to it.

As if that breaking news was not heartbreaking enough, news about the security breach at the Karachi airport wherein Airport Security Force (ASF) check post was attacked splashed across the screens.

First, it was that the ASF personnel had been injured and the intruders had come in. Then, the entire incident snowballed wherein they not only killed the ASF personnel, but a PIA employee in the Cargo terminal, as they moved rapidly deeper into the Karachi airport.

The fire fights broke out, Rangers moved in to assist the ASF personnel, sounds of blasts and heavy weaponry rent the night air, and then there was news of the terrorists moving towards an international airliner on the runway, ready to depart, and stiff resistance in which they were able to hit an oil depot, sending out leaping flames billowing smoke.

The media rushed into this chaotic scene, and added to the confusion by throwing in unconfirmed, unattributed, very speculative news, including that of aircraft on fire.

That there can NEVER be any short cuts to experience was very clearly visible on a couple of channels who rushed their senior reporters. That is where some voices of sanity could be heard. The rest were proving prime examples of irresponsible journalism, which showed that the back-end support from the newsrooms was just as lacking in experiencing and ability to deal with such crisis.

Troop movement was shown, until better sense prevailed, names of the fallen personnel were being aired, when protocol as well as sensitivity demands that the family be notified before the names are revealed. Bodies were shown, their condition graphically described, location of the mortuary as well as injured personnel was revealed too. This is all against the agreed media norms.

When will the media learn?

Despite being involved in media trainings, it is at times like these I feel it is a losing battle. Pakistan is supposed to be a ‘happening place’, not for all the right reasons, but even then, these happenings provide ample opportunity for the media to learn and improve itself, for practise is supposed to make you perfect, instead of being repetitively imperfect!

However, that is whole different discourse.

Let us talk about the ‪#‎KarachiAirportAttack.

How is history repeated? Why was the name of the Mehran and Kamra airbase bandied about? And why has a huge sigh of relief been heaved simply because in the final analysis, the ‘assets’ remained safe, despite the loss of 16 precious lives?

Is it because, as reports during this crisis indicated, prior warning had been received of an imminent attack on the Karachi Airport, and yet it happened? Just like in the case of Mehran and Kamra bases? If that warning had been given a week ago, what extra security measures had been taken? Was the alert level raised to match the threat level?

The ‘jungle’ that is being mentioned across the perimeter fence from where one group of these terrorists intruded is not a Redwood forest – those are just bushes which in any case should not have been obscuring the view of any person on watch, if there was one.

The area adjoining Pehelwan Goth should have extra security not just because of its proximity to a populated area, but because of the presence of the operational installations of the airport, like the RADAR, which are located there. They are much too easily accessible.

Also, even after the end of the operation, the other entry point has not been mentioned, despite acknowledgement of the fact that the terrorists came from two different points.

However, what bothers me, and takes me back to another incident at the Karachi Airport, way back in the mid 80’s, in September 1986 to be precise, when the PanAm Flight 73 was stormed by terrorists, who had entered the airport effortlessly, because they were wearing ASF uniforms, and were in a van with ASF markings.

They were just saluted in, and went right up to the aircraft, and boarded it, taking the passengers hostage. The crew, following protocols, escaped from the cockpit so the terrorists were not able to get the plane to fly to a destination of their choice. The saga lasted for over two days, and had a violent and bloody end, with over 20 people killed, when Pakistani commandos stormed the plane and killed most of the hijackers, but not without loss of life to the passengers either.

So is being in a uniform enough of a right of passage to even high security areas?

Is this attitude that is the Achilles heel of our security set up? Why hasn’t the protocol of questioning persons of one’s own force trickled down through the forces that are manning the entry points? There must not be any exceptions to the rule, be they women, children or people in uniform – especially those wearing your own uniform.

It is these lapses that have cost us dearly in the past, but we never seem to learn from them.

These people entered not only wearing uniforms, which are not really all that hard to acquire, but came in with heavy weaponry. Irrespective of the origin of those weapons, which again is the subject of another contentious debate, the fact that so much armament crossed the security parameter of the largest civilian airport of the country is a scary prospect.

One doesn’t want to take anything away from the round of congratulations taking place at the ‘end’ of the operation in which ASF, Rangers, Sindh Police and the Zarrar Force ‘cleared’ it of the terrorists within five hours.

Three of the intruders blew themselves up, nine were taken down, none survived; so the who, when, what, why of the incident will need some other modes of answers. 14 others lost their lives, ASF, Police, Rangers, PIA and CAA staffers. 26 have suffered injuries of varying degrees and severity. Aircraft remained safe and just the cargo building suffered damage.

But isn’t there another damage we need to assess amidst all the thumping of the chest and backslapping? The damage to an already fragile image of the efficacy of intelligence and security apparatus which is supposed to pre-empt, and prevent these incidents. Damage control and fire fighting takes the shine off the remarks about the ‘ability to deal with all manifestations of terrorism’ etcetera.

Or is it this very question that is damaging?