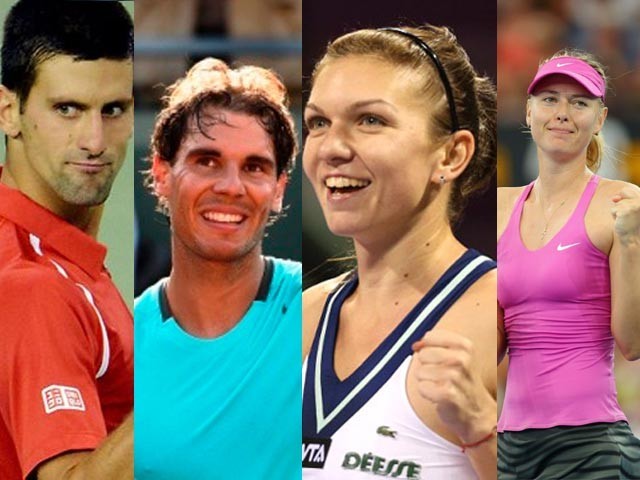 Nine days ago, in my French Open preview blog, I wrote that Simona Halep and Maria Sharapova will be the main contenders for this year’s French open. As predicted, the decision of this year’s ladies championship will be finalised, at court Philippe Chatrier, when Halep and Sharapova will battle it out for the 2014 French open crown with prize money of 1.65 million Euros and 2000 ranking points at stake.

This year’s French Open saw elite players crumble and the rise of a whole new generation of tennis players. For the ladies final, both Sharapova and Halep have played some fine tennis throughout the tournament and that why it’s very hard to pick one from them.

On one side you have the 22-year-old rising Romanian, Simona Halep, who is the first player after Steffi Graff to have won six WTA titles in her first year in the World’s top 50, leading her to be named the “WTA’s most improved player” in 2013.

Currently ranked number four in the world, the Romanian won the Junior French Open back in 2008. Halep’s 2014 clay court season can be summarised by the finals appearance in Madrid where she lost to Maria Sharapova in a three set thriller, the second round loss in Stuggart (the tournament Maria won) and a round of 16 appearances in Rome.

Halep is an aggressive baseliner. She likes to take control of the rally and can hit cross court and down the line winners with ease. She is characterised as a scrappy player with a scrambler’s talent. Surely, she has the potential to win today’s final.

But it won’t be that easy, on the other side of the net stands the six feet two inches Russian, Maria Sharapova who is far more experienced with the big stages. She was at this stage last year but lost to Serena Williams in straight sets. Maria was the French Open champion two years ago and will most definitely look to repeat that performance.

She had an amazing clay court season, winning titles at Madrid and Stuggart she was the favourite even before entering Roland Garros. The funny thing about her French Open campaign has been the fact that she lost the first set but then won the next two sets to win the match in her 4th round, quarter-final and semi-final. This goes to show how well Maria handles under-pressure situations and exemplifies what a determined fighter she is. On the other hand, Halep hasn’t lost a single set in her journey to the final.

These performances make it hard to pick a winner. On paper, Sharapova has an edge and a number of grand slams to her credit already. But this is the beauty of tennis, its unpredictability; even the best can fail. Sharapova won all previous meetings with Halep, but the latter has improved leaps and bounds in the last year and is a much better player now.

In the last two years, Halep lost the first of round of each French open and now all of a sudden she is in the final. While we may know how well Sharapova will play in the final, the way Halep will play is unknown because she has never made it this far in a grand slam. Whether she will step up her game or choke due to pressure of a grand slam final is unknown.

But for now, all we can do is and let time reveal the champion. The final begins at 6pm Pakistan time tonight.

On the other side, after two weeks of ruthless action, a draw that started with 128 players is now confined to just two players. As expected it’s going to be a Novak Djokovic versus Rafael Nadal final on Sunday.

The only grand slam that Djokovic has not won yet is the French Open; his best performance came back in 2012 when he lost the final to Nadal. Djokovis’s road to his first French open title goes through Nadal, he has never succeeded in crossing this road before but he believes he can.

In this final, the number one ranking will also be at stake and will be the 42nd meeting between Nadal and Djokovic. For Djokovic a win here would bring his grand slam tally to seven. But it won’t be that easy; his opponent, Nadal, the undisputed king of clay, will be looking forward to his 14th grand slam title. In recent times, Djokovic has improved his form on clay with a 14-1 record. Nadal, on the other hand had some surprise losses but still managed a 24-3 record on the surface this season. However, recent results can’t overshadow Nadal’s achievements at Roland Garros. In the last nine years he has only lost one match in the French Open. Even this year, many doubted his level of game when he entered Paris with a couple of early exits in the smaller tournaments, but as the French open has progressed Nadal managed to pick up his lost form.

In his semifinal against Andy Murray he won 91% of his first serve points, and lost only ten points on his second serve against one of the game’s best returners. After the match Murray said,

“You can go out there with, you know, all the tactics in the world, but when he’s hitting the ball like that, it’s very difficult to hit the ball where you want to.”

On the other hand, Djokovic would like to repeat his Rome campaign where he beat Nadal in the final (on clay of course).

This year’s French open started with so many upsets but thankfully the top two survived. With strong performances in the last couple of months, Djokovic is in the best ever position to dethrone the king of clay but record explains that that would be no easy feat.