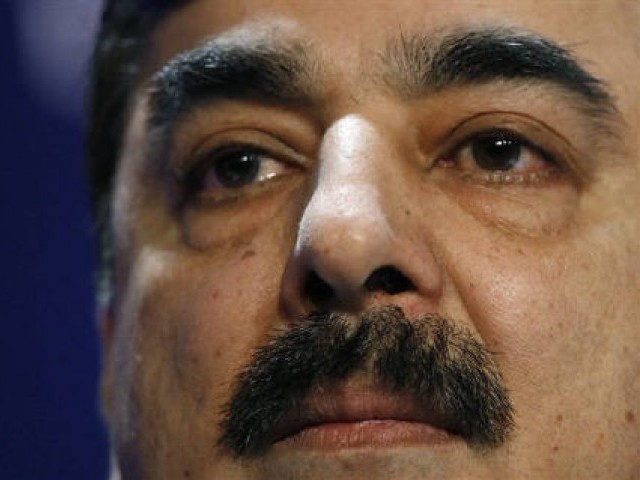 The Prime Minister is due to address the nation this weekend

I know you are a very busy man – so busy that you couldn’t find the time to write a few lines that could have averted yet another judicial crisis. I also know that you must be preparing your speech and I write to you because after two and a half years of listening to excuses I need to say my piece.

Mr Prime Minister, your party is a product of a revolution. I missed the earlier revolutions of our political history. The first one I witnessed was the movement for the restoration of judges. I remember the long march of 2008. I remember sitting in the Geo news room, overlooking Constitution Avenue, watching people gather. I remember the adrenaline rush, the wonderful feeling of witnessing history being made, the belief that finally something was going to change.

When the next day dawned, and it became painfully apparent that the long march had frizzled into a pathetic anti climax, I felt physically sick.

One year of baseless statements and endless promises have led to yet another long march.

A march led by a political party which actually has a track record of launching an attack on the Supreme Court. This time round, I didn’t let my hopes rise. The judicial restoration had turned into a symbol for political point scoring and thus didn’t feel like a selfless revolution for justice.

Under immense pressure you did what you had refused to do so far. You restored the judges.

The lawyers sang and danced. PML-N, celebrated the addition of a medal to their record, the CJ took his throne, but the seeds of discontent had been sown. We celebrated with a Laal concert swaying to Aitzaz Ahsan’s word.

What high hopes! What jubilation!

But alas, even though the judges were back in courts, your government chose to lock antlers with them.

Believe me, I am not too happy with the way the judiciary has behaved. I feel sorry for you when successive court orders put you and your government in tight spots. I feel bad when your words are twisted, taken out of context and turned into yet another bone of contention, but really, you haven’t done much to improve the situation, have you?

You talk about respecting the courts and then go on to remind them that you restored them with an executive order. You decide not to contest the NRO and then file a review petition saying that the court has exceeded it’s limits. Your Attorney General smiles and nods in agreement within the court, and your ministers issue grave statements insulting the very institution. Oh, I know you are the underdog here. I know that the power to decide lies with the presidency. But YOU, Mr Prime Minister, you are the elected leader of this government.

Why should your delicate position within the party be allowed to effect matters of national interest?

The people of this country, the very people who are supposed to be your power, worked towards this goal with hopes that once restored, the judiciary would ensure justice and accountability.

Two years down, you have failed to give the court the security it needs. Your practical refusal to implement the court’s orders remains a hitch that doesn’t allow the courts to move on from the political drama and focus on real issues.

When the Chief Justice took suo-moto notice of the rumor of withdrawing the notification restoring judges, I was on your side Mr PM. I thought it was crass, I thought it was like throwing an attention seeking tantrum. But then, during the proceedings you were asked to submit a little undertaking, you were asked simply to ensure that you were not planning to take any unconstitutional steps.

Is that something you even need to think about?

Why then couldn’t you spare the time to pen down a couple of sentences?

As if this blunder wasn’t enough, the respectable Law Minister went on to hold a very aggressive press conference and demanded to know why the courts haven’t tried General Musharraf for high treason!

Umm, you are the ruling party here. Your party chose to honor the General with a guard of honor. Your party chose to let him leave even though all these charges held true even then. When you ask the Supreme Court to take action against the former dictator, why do you overlook the options you have?

You have a rock solid case against the general, and yet you haven’t even filed a petition against him. You have the power to call him back and have him tried in court but choose to let criminals roam under the banner of your politics of reconciliation.

Excuse me, dear Prime Minister, but the way I see it,  your party does not have the right to make accusations, unless and until you have done your part.

Please, rethink your strategy. We are sick of listening to this rhetoric. Even if you think that your party is being singled out, remember that as rulers you guys are automatically prone to the most severe judgment.

You are poised to talk to the nation on Sunday and I imagine you will be offering us the regular dose of excuses, explanations and accusations.

Let me remind you – you were chosen to lead this nation, and your failure to lead us properly, has left us suffering on the sidelines, while you wage your political wars.