Anti-FIFA graffiti in Brazil: Could Pakistan ever protest against cricket? 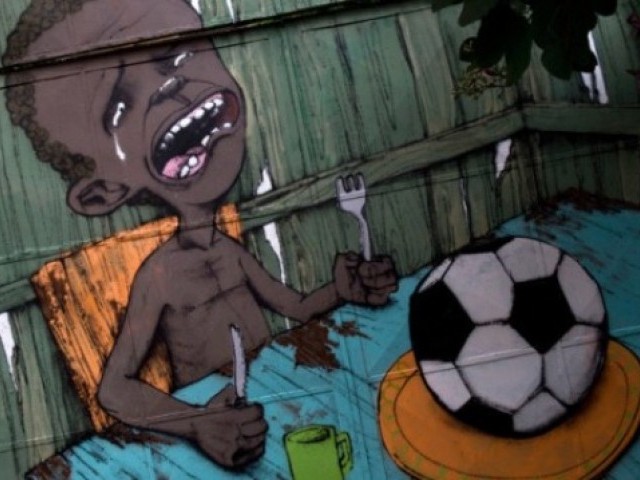 With food shortage food, inadequate healthcare and lack of proper education being rampant in the Brazilian society, the masses are questioning whether these tournaments can lead to any good for the common man. PHOTO: AFP

The first time the World Cup caught my interest was when the official theme song was being selected. The competition between Shakira, J-lo and Pitbull was worth following because no one could predict what the amazing musicians could have up their sleeves.

Although I was utterly disappointed, when Pitbull and J-lo released their unimpressive and clichéd We Are One (Ole Ola) – which was eventually selected as the theme song of the tournament – Shakira’s powerful and colourful LaLaLa Brazil 2014 was refreshing enough. I still have it on my cell-phone. On repeat, might I add.

This time, my attention was caught by the FIFA World Cup 2014, which will commence in Brazil from June 12 onwards. The reason behind my penning down a piece, however, does not revolve around the technicalities of the sport but the disdainful graffiti campaign that was started against the extravagance of the sport.

Although there are fans from all over the world anxiously waiting for the massive tournament to begin, there is a set of individuals who are avidly expressing their annoyance with the sport and the government for spending such an excessive amount of money on a mere sport when that cash can be used for something more useful. This anti-Fifa graffiti seems to have taken over all the walls in Brazil.

With shortage of food, inadequate healthcare, lack of proper education or appropriate transport systems, and social inequality being rampant in the Brazilian society, these artists are forcing the masses to reconsider whether these sporting events lead to any good for the common man.

Some of the graffiti bring to focus the lack in food supply, proper education and recreational facilities for children while others focus on corruption in the state. These images emphasise, in bright colours, how the government should have focused more on its own people, instead of opening their doors to nationals from 32 different countries. If they have enough money to manage people from 32 other nations, then why not spend it on their own people?

A nine-year-old boy eats in front of graffiti painted in reference to the 2014 World Cup, in the Vila Flavia slum of Sao Paulo. Photo: Reuters

They portrayed the mistrust people had in their representatives, especially with regards to the money inflow that will take place during the tournament, in the form of tourism, sponsorships and revenue. Brazilians believe that this money will never reach them; it will never be used to develop their country. Or, at least that is what I could make out of the vivid graffiti.

A man walks past by graffiti painted on the a wall in reference to the 2014 World Cup in Rio de Janeiro. Photo: Reuters

Insofar, Brazil has won five FIFA World Cup titles and football is generally considered the most popular sport amongst the people. To say that football is to Brazil what cricket is to Pakistan will not be an overstatement – the passion is largely the same.

However, the people of Brazil have managed to overlook their passion and focus on what is more important – their social needs. But such a movement would probably never survive in Pakistan. The fanatical outlook that Pakistanis have towards cricket will never allow them to understand how the Pakistan Cricket Board (PCB), the Pakistan cricket team and the government has and continues to exploit its own people bit by bit.

You think I’ve lost my marbles? Let’s ponder over this for a little bit, shall we?

Where do you think the money to send our players away to these international trips comes from? The PCB, yes; and from where does the PCB gets its funds? From the government and sponsorships from multinational companies, of course; and where does the government, and these companies, get the money from? Through the taxes they collect and the profits they incur. And lastly, who pays the taxes and buys their products?

The Brazilian people were able to look beyond the façade of sports, face reality as it is and now are ready to fight for their rights. But, will we ever be able to do the same?