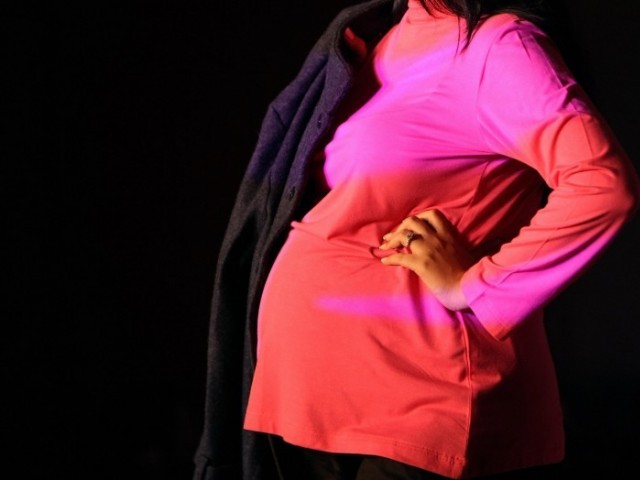 She was frightened of fate; the fear of committing the unforgivable sin of producing a daughter ran shivers through her spine. PHOTO: AFP

The room was pleasant, comfortable, properly lit and professionally decorated in muted, soothing hues of beige, gold and taupe. Tapestries artfully draped, artefacts tastefully displayed; everything oozed style and grace. The effortless elegance and oomph of old money inherited through generations, mere mortals can only think, or write about. A room, about to witness the first birth…

The loudest, metropolitan city of the land of the pure was in complete darkness, thanks to power outage. Energy crisis was at its peak and on that particular night, the shortfall in electricity production was more than many thousand mega-watts.

She whimpered in pain and clenched her fists tightly; her bitten, brittle nails dug deep into her palms, with no luck lines and left marks. In a small, suffocating room, she cried, laying on a charpoy, waiting for the self-trained midwife, who lived a few streets away. Her water broke that evening, soiling her thin legs, swollen feet and mended chappals – she was soon to be crowned with the title of motherhood, with the heavens promised under her cracked soles, for the very first time.

The foreign qualified doctor, with a receding hairline, kind eyes, years of expertise, excellent bedside manners and an obnoxiously high fee, received a frantic call and rushed to the help of the pampered primigravida, who seemed to be in preterm labour.

They could bring her to the hospital, he thought, but those with the means and charms, can amend the world to accommodate their whims. He parked his shiny BMW in the vast porch, of the huge house, illuminated by a noiseless, 50 KVA generator; he was greeted and escorted to the classy room, where she squirmed and braved the contractions.

Sweat poured out from every pore of her body, like tears from her eyes, the excruciating pain was recurring at regular intervals and she could feel pressure building down below. She heard the horrible sound of a Qingqi rickshaw and was relieved to see the local Dai (midwife) entering the room. The jittery, agitated, middle-aged woman fumbled with her pulse, palpated her protuberant tummy and poked two bare fingers inside her to check the ripeness of cervix, wiped her hands with the bed sheet, and turned back to close the door she left ajar.

The diligent doctor was familiar with his patient, who had regular anti-natal visits; he made sure her vitals were stable, before a gloved hand internal examination, ensuring full privacy and dignity, and administered adequate analgesia. He reassured the anxious family and reassessed his precious patient at regular intervals.

The young girl in the dark room with a ‘made in china’, cheap, rechargeable LED light was scared to death. She remembered the day she was married off to someone twice her age. She thought about the cold, brutal wedding night, the icy water she had to have a bath with, in the shared bathroom, before all the other family members woke up. She was frightened of fate; the fear of committing the unforgivable sin of producing a daughter ran shivers through her spine.

The spoiled brat was an example of patience at that time, beautiful teary eyes looked at the kind and gentle doctor and his calm attendant and knew, they were there to help and make things easy. Their presence was promising…

After a couple of hours

The midwife dragged out the limp, low weight, purplish red piece of human life from her birth canal, while she urged her to push harder, punctuating her commands with appropriate profanities and finally retrieved the product of conception. There was no cry of joy by the baby, just the ear piercing screams of the mother. She cut the cord with a rusty pair of scissors and vigorously patted at the blood and amniotic fluid-stained back of the new born. The mother was breathing heavily; completely and utterly exhausted.

The call of morning prayers echoed…

The mother read, instinctively, as the electricity came back after thirteen hours and the ceiling fan started running. She was relieved and grateful; the joy of having the “bijli” back was immense. She felt strangely content. When the Dai handed her dead daughter over to her, she looked at the lifeless face gingerly, closed her eyes and wished to forget the whole ordeal. The tired, sleepy midwife refused to take the few crumpled notes that were handed over to her; she put the placenta and cord in a plastic bag and dumped it beside the trash can, on the corner of the street… on her way home.

The vet graciously and politely accepted the cheque with a six digit figure before he very carefully and gently delivered the whole litter. All the pedigreed pups were examined, weighed, wiped and named thoughtfully. The mother was allowed to chew the cord and eat bits of the placenta to promote bonding with her offspring.

All of them had better chances of getting proper food, vaccination and care than the nameless dead girl, being buried at a nearby graveyard, wrapped in her mother’s frayed dupatta… She never took a breath in this cruel world, so she wasn’t supposed to get a proper funeral.

PS: Women killed in the name of honour, for daring to breathe with their own free will, are also buried coffin less, their namaz-e-janaza seldom offered.

A Doctor by Profession, a writer by passion, a dreamer by design and a rebel by default. She is currently living and working in Lahore and has a blog by the name of "Boldie Talks", (seemisadia.wordpress.com). She tweets @Seemisadia(twitter.com/SeemiSadia) and has a Facebook page as www.facebook.com/boldietalks