Please God, kill my children before they are born 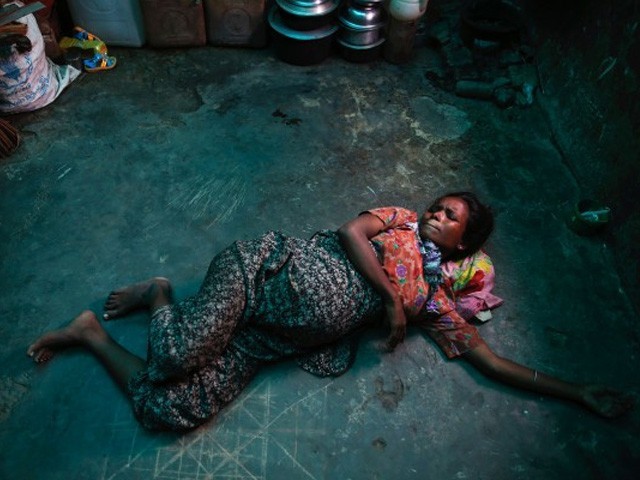 I have to be the only mother on earth who prays for her baby to die even before he’s born but I have no choice. PHOTO: REUTERS

The midwife handed her the baby. She took the tiny thing in her arms and stared at him. He was beautiful. For a fleeting moment, she felt unbound joy. He was a part of her. He was… her focus shifted. He was nothing but a hungry mouth to feed like the eight others that awaited her at the house.

Or if one could even call it a house. Two shabby rooms with a makeshift stove and a bathroom next to them was home sweet home. The ceiling leaked, the doors creaked while the paint was in tatters. Her husband had not been able to afford the repair in ages. From clothing to food, everything was scarce, except for the number of children.

She had stopped feeling the motherly joy five children ago. The motherly joy turned to pure agony when she had to watch them sleep on empty stomachs, night after night. Only when another woman in labour at the midwife’s house had told her that she could stop the whole thing by undergoing a little surgery, she mustered the courage to bring it up to her husband. That was the first time he had slapped her.

She felt numb while her mother-in-law poured out obscenities to her, called her an ungrateful imbecile. She never brought it up again. Every time she found out that the next one was coming, she would pray hard that she suffers a fall.

“I have to be the only mother on earth who prays for her baby to die even before he’s born but I have no choice. In order for the others to live, I pray this one dies even before he is born. That is a better fate than this hell of starvation and poverty.”

These were her thoughts every time.

This is the story of Zarmina and many others who are smothered by false fears of society and religion, so much so that they keep their heads down and live this life in misery; a life in which they cannot even feed their children properly let alone give them decent education or careers. What good is such a life?

Islamic teachings are very clear on the lines of birth control and contraceptives. They are all allowed in such desperate conditions. Yet our antiquated beliefs fool us otherwise. Raising such genuine concerns in families is considered a taboo. If women like Zarmina start talking about ways to avoid conception, it causes outrage. It is considered an insult to the manhood of the husband and an ungrateful act to the blessings bestowed by the Almighty.

(This is a gift from Him and you’re being ungrateful)

These are the words that echo in such houses. If God had meant for humans to breed uncontrollably like animals, He wouldn’t have created us with brains that raise such concerns. No doubt that He and only He is the provider of our bread and butter, but He doesn’t send it in grocery bags to our roofs every night. We are meant to earn it ourselves, just as we are meant to think for ourselves and decide if such actions benefit our families. That is why we, humans, differ from animals; because we know when to stop.

Such mentality should be vehemently discouraged. Talking openly to the concerned people in the family about such matters is important. Husbands and wives have the most sacred bond among all family relations and to lead an affordable life, it is pertinent for them to indulge in such discussions.

Education and population-control laws should be the first priority for any ruling government because until situations like Zarmina’s prevail, the poor in the country will only become poorer. And this time, the blame will not lie on the budget, it will lie on us!

Just one open-minded conversation, one educated perception is all that is required to save you and your children from a lifetime of suffering.