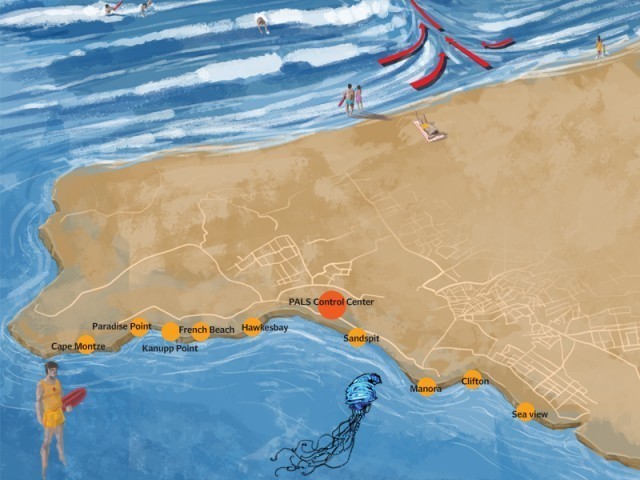 The guard from the “itaamic” plant did not let us go forward to Cape Mount. He said the beach was out of bounds for citizens now. ILLUSTRATION: JAMAL KHURSHID

With summers approaching, the beach at Cape Monze, or Cape Mount as it is popularly called, seemed like the best place to go to give our children an outlet for their energy. Cape Mount in particular because of its unique setting and excursion value.

It was in 2006 that I had last visited this picturesque seaside with a group of friends. Glimpses of its beauty are still etched in my mind. From the highland, where we parked the car, looking down at the long stretch of the pristine beach was unworldly and then descending down to the untouched seashore through mountain rifts added thrill to the experience.

Cape Mount is actually a headland located at the end of the triangular peninsula, which stretches out of Karachi’s mainland and juts into the Arabian Sea. The cape is formed due to the convergence of a low lying mountain range with the sea. Logistically speaking, it is the farthest one can go westwards while remaining in the city’s precinct. In order to get there, one has to bypass a string of beaches located at the base of the same triangle – Sands Pit, Hawks Bay, French Beach, Paradise Point and the likes – and continue until the road ends. Due to its remoteness, and unavailability of facilities such as beach huts, the place is unspoiled and less crowded.

To avoid the scorching heat-wave, we left home really early in the morning – so early that when we hit the road, both the moazzin and the rooster were calling for pre-dawn prayers. At that time of the day, roads looked wider and saner, making it a pleasurable drive; a luxury which is not so common around Karachi. It was also soothingly quite, with only birds humming and singing throughout the one hour or so journey.

In short, everything was perfectly set for our relaxing picnic, that was, of course, until we came close to KANUPP – Karachi’s only nuclear power plant. We had barely passed the popular Paradise Point beach, 10 kilometres away from our destination, we were stopped at a makeshift check-post by a guard, whose uniform did not reveal much, and were asked to turn back. Puzzled, I asked the man for an alternate route but, unfortunately, there was none.

Before this check-post, we had noticed ‘no-entry’ signs on branch roads, probably because of the sensitivity of the power plant site, but since there was no such sign installed at the barrier, I requested the sentry to let us pass; we even resorted to emotional appeals about how we drove from so far away and that too with kids. But the, otherwise polite sounding, man was uncompromising. Upon asking, he triumphantly disclosed his association with “itaamic plant” (atomic) plant and told us that the road onwards has been out of bounds for civilians for the last couple of months, and will remain so in the future.

The only exception, according to him, was given to those who possessed permission letters from the Pakistan Navy. He explained that even locals were barred from visiting Ras Muari, the local synonym of Cape Mount, and the remaining villages in the vicinity were to be evacuated soon too.

We were extremely disappointed with this early morning anticlimax; however, there was no option left but to retreat. While making the u-turn, I recalled the recent newspaper discussion regarding the pros and cons of the extension of the nuclear facility, in the name of allaying load-shedding, and the whole drama started making sense. We felt like we were victims of an atomic site – even before it was constructed!

Thankfully, access to Paradise Point was still open, so we settled for the second best thing. Not to mention, we were the first ones to reach the picnic spot.

As the time passed by, however, a crowd started building up at the beach – first a few locals and then the picnickers. The group of locals embarked on their motorboats and returned shortly with their catch of the day.

The heavy construction was more visible in broad day light, with dumper trucks and loaders running to and fro relentlessly. At the beach, an old man, who belonged to the indigenous Jokhio tribe, was collecting sand for his chappar. I asked him about the road to Cape Mount and he confirmed that people were no longer permitted admission, and even at Paradise Point the security prohibited people from staying past sunset. The man also complained of what, according to him, was land grabbing.

Soon enough, the sun let go of its benevolent outlook and started showing its typical May colours. Filled with the cool splendour of the beach, we packed up and headed back home around noon. At the end of the day, it turned out to be a fulfilling morning; we enriched ourselves with solar energy and much needed fresh, unpolluted, air.

I do believe, however, that had we been permitted entry to our desired destination, the day would have been more enjoyable. Enveloped with a feeling of deprivation, I kept thinking of the beautiful beach which was now a no-go-area because of the nuclear power plant. Yes, I do believe that drastic measures may be required to stop our country from toppling over in the energy crisis, but barring citizens from visiting a natural recreational spot might not be a great idea. I hope the relevant authorities will look into this and come up with some sort of a reasonable permission mechanism, so that we get access to the one and only Cape Mount again.

He keeps a connection with his surroundings while evaluating investment opportunities for his employer. He also shares his travel experiences at mozumbus.blogspot.com regularly.