Will Modi be able to make peace with Pakistan? 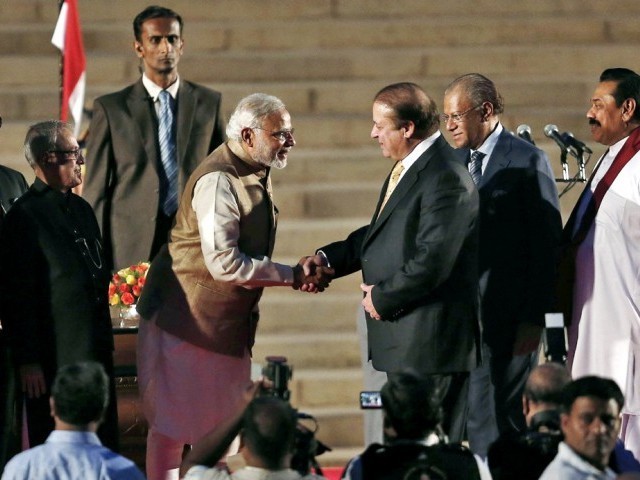 Any meaningful dialogue between India and Pakistan has to be based on the future needs of the subcontinent. We cannot hold the future of the region hostage to the actions of extremist forces or non-state actors. PHOTO: REUTERS

This is the first time since 1994 that a Pakistani head of state, during his trip to India, did not meet any separatist leaders from Jammu and Kashmir. During his two-day-long stay in New Delhi last week, prime minister of Pakistan, Nawaz Sharif, confined himself to conversations only with the Indian leadership.

Is this a change in Pakistan’s policy towards Kashmir?

We all know the answer. For Islamabad, Kashmir is very much an inalienable part of its foreign policy and domestic agenda.

However, Nawaz understands that raking up controversial issues only accentuates the differences between the two nations. It leads to the wastage of an important engagement. The prime minister’s immediate worry is the condition of economy in his own country and how to bring it into the top gear. Therefore, he was willing to put contentious issues behind and be more futuristic by focussing on issues that affect the day to day lives of the common people.

Indeed, his visit has to be looked at from that perspective. He is keen to engage India and deepen economic ties that can help in boosting the sagging economy of the Islamic republic. He chose pragmatism over prejudice while dealing with a controversial politician like Narendra Modi.

However, the question remains, what went on in the mind of the Indian prime minister when he invited leaders of the SAARC nations to his coronation in Delhi. Can he show the same pragmatism in his interactions with the leadership of the Islamic country? Or were the invitations to Nawaz and other leaders meant only as a tool to legitimise his rule and enhance his stature?

Modi is a prisoner of his image. Massive mandate in his favour has not overshadowed his past and his background. He is a by-product of an ideology that treats Muslim as others and believes in a Hindu majoritarian state. For this ideology, Islamic Pakistan is an enemy state. Bred and brought up with such a mindset, it would not be easy for the hardcore Hindu leader to reconcile his ideological worldview with the task of governing a plural country.

As chief minister of Gujarat for more than a decade, he spewed venom against Pakistan; he built an image of himself as a Muslim baiter and Pakistan hater. His cadres and supporters have inculcated this value. He promoted himself as a “decisive leader”, an “uncompromising politician” who would not “play” with the honour of the country. It is this nationalistic chauvinism that is his hallmark.

A quirk of fate has brought him to the helm of affairs in Delhi. Modi faces the dilemma of being dubbed as lame if he demonstrates a conciliatory approach towards Pakistan.

No wonder the much talked about meeting ended with the same rhetoric as before. India raised the issue of 26/11 attack and the trial of Hafiz Saeed; it also talked about cross-border terrorism. The previous government also remained confined to time warp.

The hype the bilateral summit between Modi and Nawaz generated ended in a whimper, with rhetoric dominating over reason. The Indian government could not go beyond its stated position. The change in government has not brought about any significant difference in the attitude of the rulers in Delhi vis-à-vis Pakistan.

On the contrary, Nawaz demonstrated a marked willingness to walk an extra mile. Risking the wrath of the army and other non-state actors, the Pakistani prime minister decided to come to India to explore opportunities and new grounds for talks with the traditional enemy. In a press brief, the leader of the Islamic republic asked the Indian leadership to recognise the mandate for change in both the countries. He said that the electoral verdict, in both the countries, needs to be respected and honoured by giving them a future different from the past.

The important thing is that, he is willing to educate his people about the need for attitudinal change towards the eastern neighbour.

However, are the new rulers in Delhi willing to engage their people and enlighten them about the need for a glasnost and perestroika in their relationship with the Islamic republic?

The coverage in media prior to Nawaz’s visit belies that hope. In the run up to the visit, the debates in TV stations were filled with anger and acrimony. The Indian side would always assume the holier than thou attitude and single out Pakistan for the trouble at home. The other side would try to match the rhetoric.

The problem is that, due to lack of informed debate and enlightened argument, the younger generation remains stuck where the old one was; they remain prisoner of prejudice. The leadership knows how to inflame their passion but they don’t know how to inform the youth about the issues.

Any meaningful dialogue between India and Pakistan has to be based on the future needs of the subcontinent. We cannot hold the future of the region hostage to the actions of extremist forces or non-state actors. These players will be defeated only when we engage with each other, only when we allow the civil societies in both the countries to hold dialogue with each other, only when there is more people-to-people contact. We can move ahead if we link our business interests and become stakeholders in maintaining peace in the subcontinent.

Can Modi create this kind of vision where the people become stakeholders in peace?

The Bharatiya Janata Party’s (BJP) victory has inspired a new kind of hope in India but the problem is that this optimism is tempered with lots of scepticism. Modi carries lots of ideological baggage and the burden of a past. It will not be easy for him to adopt a moderate line on Pakistan; his hardcore supporters will not approve of this and blame him for betraying them.

Former prime minister Atal Behari Vajpayee had a different kind of persona; he was not a hardliner and he never cultivated his supporters on the diet of chauvinistic rhetoric. So it was easy for him to deal with Pakistan without inviting any suspicion about his statesmanship.

Modi will have to make peace with his supporters and hardcore followers before he reaches out to Pakistan.