Hypocrisy at the Pakistan Football Federation is killing our chances at FIFA! 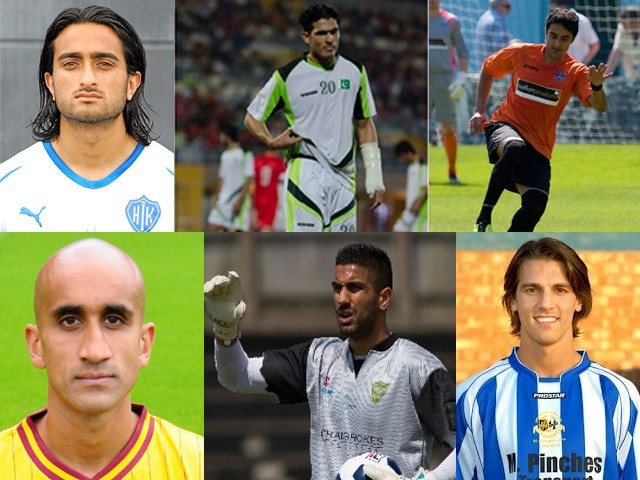 Most of these Pakistani descent players play for semi-professional and professional clubs.

Despite lack of infrastructure, no comprehensive grassroots program and a mediocre league, Pakistani football does have one major gain – foreign-based players.

Throughout the globe, national teams opt to pick the best players no matter where in the world they are playing. In Asia alone, you can see glaring examples with world cup candidate Iran recruiting players such as Ashkan Dejagah (Fulham) and Daniel Davari (Grasshopper) from Germany to bolster their ranks. Similarly, Lebanon has done the same with a host of European-born Lebanese players opting to play for The Cedars on an international platform.

As a result, Lebanon has reached the last round of the 2014 FIFA World Cup qualifiers and thrashed Pakistan 3-1 in a one-sided game with a reserve team when the two sides played a friendly in February.

Making sure to benefit from the trend, even Philippines has benefited enormously from European-based players such as Stephan Schröck (Eintracht Frankfurt), Roland Müller (Servette FC), Juan Luis Guirado (Burgos), Neil Etheridge (Fulham) and Dennis Cagara (Lyngby) with results improving and causing a football revolution in the country.

You don’t even need to go that far away for inspiration, just take a leaf out of Afghanistan’s book. They often boast their entire starting team from Afghanis playing abroad and, with that added quality and professionalism, Afghanistan thrashed Pakistan 3-0 and won the 2013 SAFF Cup after beating India 2-0 in the final.

We, on the other hand, have yet to reach the final of the SAFF Championship despite taking part in the eight team event since 1993. For Pakistan, the problem is multi-faceted. Firstly, some consider our foreign-based contingent to be non-Pakistanis and thus claim that we should not include them in our national team.

Well, who are these guys?

Bashir, Ali and Butt are based in Denmark, while former Manchester United trainee Ahmed and Khan reside in England. Rehman, who captained Pakistan in their last senior outing was with English Premier League side, Fulham, a few years back and is now currently playing top flight football in Malaysia.

They all possess Pakistani passports, National Identity Card for Overseas Pakistanis (NICOP) and they all love playing for their country. Ace goalkeeper, Butt, who was born in Canada, declined a call-up from Canada U-19s to fulfil his dream of becoming the Pak Shaheens’ number one. Clearly, anyone in their right mind would not dare to call them anything other than Pakistanis. But some go on claim to that these players are not good enough.

You’ve got Bashir who played for Danish Superliga giants and UEFA Europa League regulars FC Nordsjaelland and is rated by many as one of the top three players in the SAFF region.

Ali spent a season at UEFA Champions League side FC Copenhagen and is one of the most skilled Pakistani players this writer has ever seen.

On the other end, Rehman made his English Premier League debut against Liverpool with Fulham, played for QPR, Brighton and Hove Albion and even captained Bradford City in League Two.

But when all ability and ‘them being Pakistani’ related issues have subsided, local coaches claim that these players don’t attend ‘camps’ to prepare for events.

Most of the players mentioned play for semi-professional and professional clubs. And other than FIFA dates, a club reserves the right to waive away national team duty. But despite that fact, these players have travelled to attend training camps and been a part of the national side; leaving their jobs, studies and clubs behind just for the sake of representing their nation.

But that’s not always possible, especially since the Pakistan Football Federation (PFF) are living in the stone age and call for two month long ‘camps’ to train for events.

Throughout the globe, each national team just holds a week or so of training and plays friendly games to build team chemistry. And that is not even an issue for players like Ahmed and Rehman, who have been with the national team for more than seven years.

But there are more double standards and the PFF has been caught out.

Recently, two players namely Muhammad Adil and Kaleemullah became foreign-based players after signing for FC Dordoi Bishkek in Kyrgyzstan, but according to our coaches, these don’t count. Moreover, former players such as Mohammad Essa always blame the foreign-based players for coming late and pins losses on them.

But why don’t they raise an issue when Adil arrived late from Kyrgyzstan to Palestine for Pakistan’s clash against Sri Lanka two hours before the game and did not attend the camp.

Moreover, Kaleemullah wasn’t even released by Dordoi and did not play for the Shaheens. But why wasn’t this criticised by Essa for showing a lack of commitment. I don’t have a problem with such incidences, it’s your club that comes first but it’s the hypocrisy shown by former players and coaches that is the problem.

All this hostility shown by some of the local coaches and players has meant that we have never gotten more than four foreign-based players in one side. And even then, with their inclusion, we have improved considerably.

We take pride in seeing Pakistani players represent other countries in cricket such as Moeen Ali for England, Imran Tahir for South Africa, Usman Khawaja for Australia and the dozens on show at last T20 World Cup for UAE, Holland and Canada. But it has developed a very negative approach when the same happens in football with these overseas-based Pakistanis coming home to represent Pakistan. There are a number of Pakistani origin players that have represented Pakistan but were never welcomed with open arms by many and continue to be labelled as ‘foreigners’ despite wearing the green shirt with pride, holding a green passport and originating from Pakistan.

Pakistani football has gained enormous popularity in the last decade but it is yet to reflect on the local game and the way things are going, it will take longer than people hope. That is simply due to ill formed policies of the federation which are being executed by officials who have no expertise in aspects of football.

In Pakistan, there are no proper football academies as governmental departments dominate the domestic football leagues and only recruit players over the age of 18; when they have missed their development age. Football fans have not even seen the Pakistan Premier League televised ever since it started 11 years ago. Therefore, the general public has no awareness whatsoever on who, where and how they get selected for Pakistan. All this fuels the discussions and debates on social media and football circles that national junior and senior sides aren’t selected on merit and so forth.

Subsequently, foreign-based players are treated with contempt. But last year, Pakistan’s Serbian boss Zavisa Milosavljevic claimed that he would not tolerate anyone calling the aforementioned players ‘foreigners’. While that was a major breakthrough in the problem, his successor, Mohammed Al Shamlan of Bahrain has taken a complete U-turn on that policy.

He is no longer calling up foreign-based players except Adil and Kaleem, and to add on, he is even ignoring senior players from the Pakistan Premier League. Instead, he is focusing on a flawed-youth policy, where he intends to give our U-22 team a bit of exposure and make them the senior side.

This, possibly, could destroy Pakistan’s chances of progressing at the FIFA 2018 World Cup qualifiers and 2015 SAFF Championship.

Here we have our core batch of foreign-based players and couple of new ones like Nabil Aslam (AC Horsens) who played in the UEFA Europa League and could be an ideal centre-back partner for Rehman. Combined with talented local ones such as Saddam Hussain (KRL), Ahsanullah (HBL) and Mansoor Khan (PAF) could produce some sensational results.

But no, a country which allows governors with dual nationality clearly doesn’t want to win and use these players. Instead, we want to brand them as ‘foreigners’ even when they want to play for Pakistan, wear green shirts and are Pakistani in spirit and by the law.