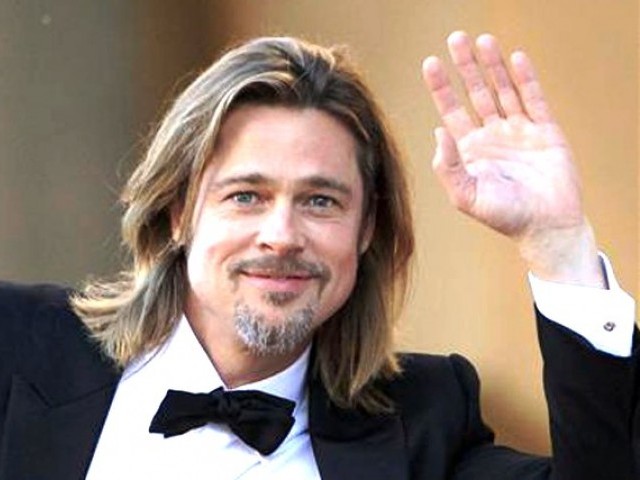 Brad Pitt, the American heartthrob, my childhood crush and the guy who has caused many accidents at the intersection of Punjab Colony with his face plastered across a huge billboard as brand ambassador for Tag Heuer - HE was almost punched in the face! PHOTO: REUTERS

A crazy Ukrainian decided to make it his life’s mission to go parading from one Hollywood event to another, making a fool out of himself at the expense of our beloved celebrities. His latest whim consists of getting out of the fan gallery and jumping on Brad Pitt, allegedly to punch him. Yes, you read it right! This guy almost managed to punch one of the most handsome men on the planet.

Brad Pitt, the American heartthrob, my childhood crush and the guy who has caused many accidents at the intersection of Punjab Colony with his face plastered across a huge billboard as brand ambassador for Tag Heuer – HE was almost punched in the face!

So it all went down in Los Angeles on May 29.

The Ukrainian prankster who goes by the name of Vitalii Sediuk was one of the countless people standing behind the barrier to watch famous Hollywood celebrities attend the red carpet premiere of Maleficent. While Angelina Jolie and the rest of the gang signed autographs and took flawless pictures, Mr Sediuk managed to jump over the elevated barrier in an attempt to crash the red carpet at the celebrated El Capitan Theatre. He then ran towards Pitt, touched the actor briefly before the security guards came running to stop his failed attempt.

Fortunately for us, nothing happened; he barely brushed against him before security intervened. I don’t even want to imagine what would’ve happened if his attempt was successful. The Achilles of Troy’s Greek God face, his million dollar smile and those mesmerising blue eyes; God forbid something should happen to that face.

If you think this was a one-time thing, think again!

Sediuk is known as the most notorious prankster in Hollywood for a reason. This is a list of his hilarious pranks:

1. Can I take a picture with you, while I poke under your dress?

Earlier this month, the prankster caused quite a stir at the prestigious 2014 Cannes Film Festival. This recent gag was so absurd that it almost makes me laugh while I write this. So this brilliant prankster decided to dive under America Ferrera’s dress while she was busy taking photographs with Cate Blanchett at the red carpet. Hard to believe, yes I know!

According to Vulture magazine, she said:

“I don’t even know what happened. I felt something behind me and there’s this guy under my dress, and then two guys drag him away!”

I want to feel bad for her but I can’t. I can’t help but crack up every time I look at that picture. Imagine yourself in a similar situation; you start posing for a picture and then in a second you notice there is someone creeping under your dress.

2. Excuse me while I hold you and never let you go!

At the 20th Annual Screen Actors Guild Awards in Los Angeles, while Bradley Cooper stood there talking to his friends, Michael Peña and actor Mandy Patinkin, Sediuk immediately lurched and decided to give him what is being called a ‘crotch hug’. The reaction he got was priceless – Cooper wasn’t ready to believe it and his fellow actors were just standing there in disbelief. After everyone took in what just happened, they helped Sediuk stand up and pry away from Cooper’s legs.

This incident was a tad bit too funny and the picture is worth a million dollars. Okay, so let’s be honest, in this case, I don’t mind switching places with Sediuk; to hold onto the legs of this gorgeous man would bring me one inch closer to touching his face.

Sediuk has been on the map since 2013. At the 55th Annual Grammy Awards in February, he got up on stage and tried to ruin Adele’s acceptance speech for Best Solo Pop Performance by giving a version of his own speech.

“It’s such an honour to receive this award,” said Sediuk on stage.

But thank the Lord for Jennifer Lopez. She stopped him and cut his speech half way. But Sediuk managed to put in a few words before he was cut off.

“I love you Adele”, he added right before Jenny from the block cornered him off.

In my dreams, I do the same to Justin Bieber every time he wins an award, and sometimes my sister does this to me when I dream of winning one.

But in any case, I wouldn’t want to be jailed overnight as a result, which Sediuk has been for carrying out the prank on Pitt. I mean I love pranks and jokes as much as the next guy but if I get convicted for one count of wilfully leaving a spectator area and entering a performance area, you know something went majorly wrong.

4. Rewind back to when it all began

Sediuk made his mark on the Hollywood scene in 2012. He kissed Will Smith at Moscow’s Men in Black 3 premiere. Although, Smith didn’t take it as well as Cooper did. He slapped Sediuk and shoved him away.

Wow! Sediuk truly has achieved so much in such little time. I mean kissing Will Smith, touching Bradley Cooper, being in the same room as Adele and J Lo, creeping up on America Ferrera’s dress and finally attempting to punch Brad Pitt in the face, he really has come a long way!

I wonder if he will end up inspiring characters in Pakistan who might parade around in our film industry. I can’t even begin to imagine Shaan’s reaction, but I know for a fact that Meera will love the publicity! At least this character will add an entertaining factor to our boring media events.