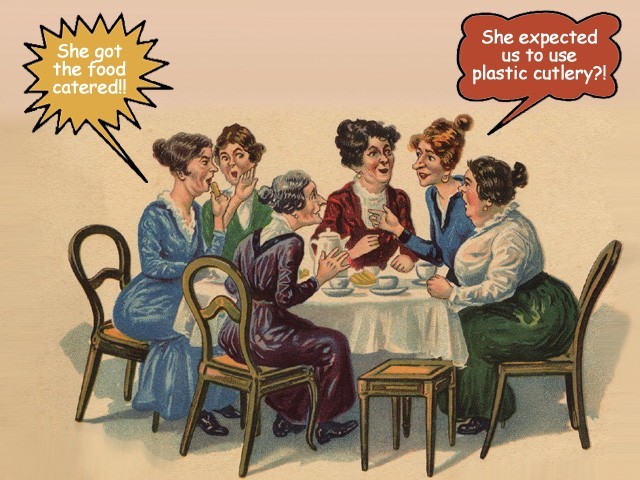 These dawats are the ideal time for aunties to assess the housekeeping, ‘mommy’ abilities and other womanly skills.

A few months ago, I was at an Eid brunch and everyone seemed to be having a jolly good time, exchanging pleasantries and smiles while sitting pretty in their colourful Eid joras. However, things were not as lovely as they seemed. As soon as one lady left amidst loving goodbyes and kisses, the other ladies present started speaking ill of her.

(She never hosts parties herself but shows up at everyone else’s!)

This left me shocked and mighty uncomfortable as this was said by none other than the host herself. The strange thing is that if the host did not like the guest or had ill feelings because the latter never held dinner parties, then why invite her in the first place?

When I moved to Canada a few years ago and started mingling with other desi families, I noticed a pattern of behaviour. People, both men and women seemed to be crazy about dinner parties. How often, how many people, how grand the menu is are some of the most popular topics of discussion. I observed people who talked about families who did not have dinners as frequently as themselves. They also criticised the food and whether the cutlery used was plastic or otherwise. Since the domestic help culture isn’t widely followed in the west, many families make arrangements for disposable tableware for large gatherings. A few times I even happened to witness women complaining about their husbands eating in disposable plates!

Although picking the menu and food apart is a common trait in us Pakistanis, I noticed a new trend in Canada altogether. Even though catering is known to be fashionable in Pakistan, a luxury of sorts that only the rich could afford, here in Canada it is deemed the opposite. Women who cater for their dinner parties are considered lazy and effortless.

(She got catering done)

(She ordered food from outside; she could never make it herself)

Now why a woman chooses to cater food for her party is her wish and she may have a number of reasons for doing so. Perhaps she is busy, has an appointment, has health issues, has children, is a full-time working woman or even (gasp) wants to enjoy her own party without all the cooking.

Now when families come over to your house for dawats, besides the food and tableware, they will be inquisitive and have something to say about your house as well. Firstly, they will assess the locality, whether the house is a townhouse, semi or detached, the number of bedrooms and full washrooms and how clean it is. They will insist on seeing every room in your house, might even open the doors to the closets and washroom(s) themselves (yes, it happens) and scan the area like an x-ray machine with their sharp, three-dimensional eyes. And although they will say a number of nice things and shower your house with compliments on your face, you have no idea what’s being said behind your back and believe you me, it isn’t pleasant.

These dawats are also the ideal time for aunties to assess the housekeeping, ‘mommy’ abilities and other womanly skills. They will judge each and every aspect of your life, from your house to your children to whether or not you work, to the holidays you take and then talk behind your back. Reputations are broken and images are tarnished at the drop of a hat.

Since I do not like to concern myself with these trivialities, I tend to cut myself off from women who talk in the abovementioned manner. I have selective company of people who concern themselves with more important issues rather than catering and plastic cutlery. Although, when I do have to meet with such people once in a while, I try to avoid hearing about other people’s dawats and houses.

Our company defines us and the most important thing in your host should be her kind and compassionate heart, not her home-made biryani!