Elliot Rodger: A product of the US government’s incompetence? 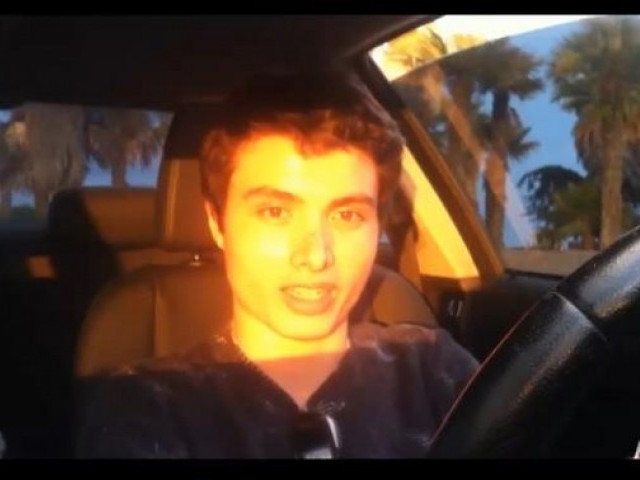 A screenshot from a video that was posted on You Tube by Elliot Rodger. PHOTO: REUTERS

“You don’t think it’ll happen to your child, until it does.”

This is what Richard Martinez stated in a press conference, despairing over the loss of his 20-year-old son, Christopher Martinez. A deranged individual – Elliot Rodger – who sought revenge from female university students for rejecting him, instigated a ruthless shooting spree on the streets of California, killing six people in cold blood, before committing suicide himself.

To the sons and daughters of the ill-fated families, may their souls rest in eternal peace. These victims were unreasonably deprived of their right to live; they were killed without any reason. And their blood is on the government’s hands. Why? Because had the government implemented stricter gun control laws, this wouldn’t have happened – those people would still be alive.

This brutal event is evidently one of the most shocking incidents in the history of gun violence. The gradual build-up in this reckless use of fire arms, goes on to show the ineffectiveness of American laws. It shows the lengths that youngsters can go to, to attain their targets.

It is sad that it has taken the deaths of so many people to make the government realise that a more stringent gun control is imperative for society. The government should undertake responsibility when legally handing over guns to youngsters. There are several factors that have to be taken into consideration when allowing people legal possession of armed weapons, such as their age and the nature of their job. No one should be legally allowed to possess guns until it is absolutely necessary. Likewise, prior to handing over fire arms, owners must go through extensive training sessions and maybe even classes explaining why there is no need to use a gun until absolutely necessary. Those terms should also be set out in a law so that the use of a gun, other than those set out, is severely punishable.

A Facebook page about Rodger referred to him as,

“The American hero who made the ultimate sacrifice in the struggle against Femi-nazi ideology.”

Just because those women rejected Rodger does not mean they deserved to suffer. They have a right to live as they desire and have the freedom to choose whom they want. I believe Rodger was disdained because his approach did not work well with the opposite sex. Besides, making people suffer for something you deem wrong does not define gentlemanly traits. Anyway, accusing Rodger now would not help, since the damage has already been done.

Before the massacre was initiated, the police interrogated Rodger at his house, yet they did not investigate his room, which was full of armed weapons. Why? What does that say about the incompetence of police departments in the US? Had they realised that there was more to the situation than was meeting the eye, his victims would probably have been alive today.

Rodger’s case goes on to show the drastic consequences of how society is threatened when mentally unstable young adults are countenanced possession of weapons, under the pretence of defence.

I wonder if university going students feel safe. God knows how many young individuals have taken inspiration from this event. The aforementioned Facebook post is evidence to that.

Universities are supposed to be the hub of learning. A place where intellectual development takes place, a safe haven far away from the worries of the world, a place where students go to discover themselves, acquire skills and preparation required to face the real world outside the four walls of their safety harness called university. Getting killed during a shooting by a madman is the last thing you would expect whilst enrolling.

The Elliot Rodger shooting case should be an eye-opener for America. Yes, we can continue to argue for and against gun control laws. But if you let the dust settle, the question is quiet simple – does one person’s right to choice really trump another’s right to live?

The author has Master of Science in Social Sciences and Psychology research. She is a bibliophile and is interested in writing, research, learning new languages and traveling. She is also an aspiring polymath, particularly in subjects: positive, developmental and cognitive psychology, political economy, international relations and world history. She tweets @RidaK92 (twitter.com/RidaK92)

Is Singapore turning into Pakistan with its uncontested and undemocratic election of Halima Yacob?

Kate Winslet survived in Titanic but will she be able to make it out alive in The Moutain Between Us?

And so it is