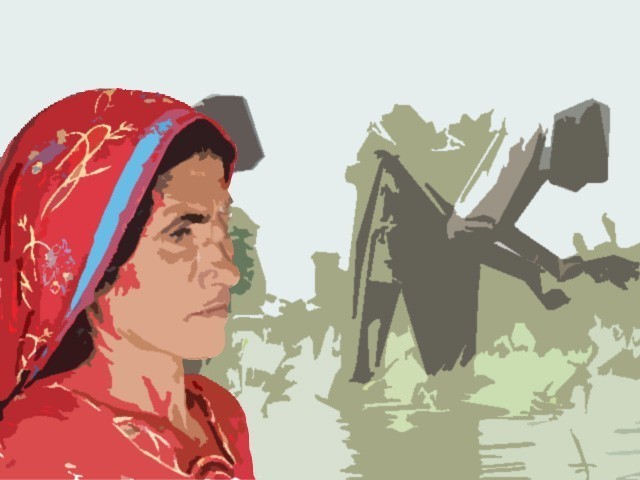 Giving a woman dowry is seen as acceptable and inheritance is frowned upon. Isn’t it supposed to be the other way round? PHOTO: FILE

A few days ago, I was at a get together with friends and the usual small talk somehow turned to the ‘controversial’ topic of women and their property rights.

One of them dramatically sighed and told her sympathisers how her ‘atrocious’ sister-in-law had the audacity to ask for her share of the family’s property. That opened up a Pandora’s Box as she was joined in by the other women who started sharing anecdotes of girls who had the audacity to ask for their share of their family’s property. I did not, and could not, understand what was so reprehensible about a girl asking for what is legally hers.

However, this was not the first time (nor the last, I’m sure), that I have heard people expressing such views. While our religion and law gives us the right to property, our society makes it a hush topic, a taboo. Islam has prescribed a certain share and percentage through the Shariah law, for women in all circumstances. Historically as well, it is a religion that initiated the rights of women at a time when they were treated as inferiors.

Hence, the blame falls on our society for perpetuating this discrimination. What makes this scenario stranger is that giving a woman dowry is seen as acceptable (in some cases necessary) and inheritance is frowned upon. Isn’t it supposed to be the other way round?

Whether the property in question is that of her father’s or her husband’s, a woman is usually deprived of her right to it. In the lower-income groups,this is either implemented by force (sometimes even physical), or just taken for granted since women are usually uneducated and ignorant about their rights. However, the practice of depriving a woman of her property rights is not restricted only to the less-affluent and uneducated class; it is also rampant in the middle and upper-classes. The only difference in the privileged classes is that the means employed are more covert.

Here the woman is not subjected to force (in the normal sense of the word), but is deprived via subtle tools, like family pressure and expectations, that are as unfair yet equally effective. While her right to the property is as legitimate as her brother’s, she still has to fight for it. She has to go through a long and bitter struggle during which, in most cases, she will be labelled as selfish and greedy. Very few women have the courage to go through it because they believe it will cause inevitable estrangement and a weakening, or even breaking, of family ties. This is why, before asking for what is rightfully theirs to begin with, women wonder whether it’s even worth it.

However, every woman needs to understand that her right to property is not just monetary. Her right to property is about gender equality, the progress of women and legitimate claims. It’s an important way to empower herself, economically as well as socially. A woman with property will have much more of a say in household matters and more freedom of choice in her life. In adverse circumstances, she will have the means to support herself and be independent.

When a woman gives up her share of the property, she is perpetuating a wrong custom. By forgoing her rights, she is setting a wrong example for her children, her daughters as well as her sons. In order to make a change, she should realise that she has to be the one to take the first step. This does not only mean claiming her right, but also supporting other women around her to stand for themselves, be it her daughters, sisters or, just as important, her sisters-in-law.

Coming back to the conversation with my friends – after listening to the woman who initiated this topic, I asked her what she would have done if she were in her sister-in-law’s shoes. Did she believe the same for herself that, being a woman, she had no right to the property of her father or husband? There was an uncomfortable silence, after which she said,

“I wanted my share of the property but I never got it”.

In most cases we really do need to speak up. The culprits are not just those who deny people of their rights but also those who silently watch from the sidelines. This is an issue which can only be addressed and changed if it is openly talked about and if the women, and perhaps more importantly the men of the family, take a stronger stance. Socially, it is perhaps the men who play a pivotal role in this matter.

A few years ago, my paternal aunts asked my father, who is their eldest brother, if they could have their share of the family lands. At that time, I was a teenager who had never given any thought to this issue. However, I will never forget how it was sorted out. When my parents discussed the issue, they did not talk about it like if they were giving away something of their own. Instead, they spoke about it like it was something which already belonged to my aunts and it just needed to be handed over to them. When my uncles protested, my father put his foot down and made it clear that this was their right.

That day my parents did not only protect the rights of their sisters but also set a great example for their children. It made me realise that I am one of those few lucky daughters who will not have to fight for her rights. More importantly, I am a daughter who knows that she is just as important and dear to her parents as her brother and will be treated as an equal.

A lawyer and chartered accountant by qualification, with an interest in social and political issues.