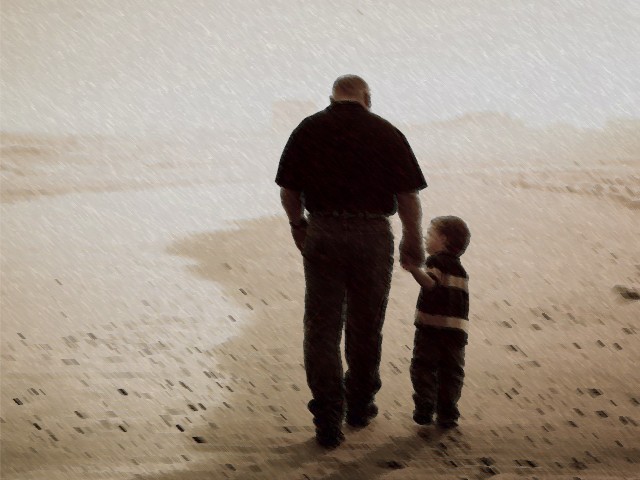 I had been very close to my father and vice versa in a fiercely protective, Air Force-dad kind of way.

An orphaned refugee, a remnant of the last jihad, writes a riveting and imaginative composition on the topic, ‘My Father’ – an idealised fantasy inked to paper in commemoration of an absent parent, a youthful escape into what might have been.

Even though the writer never, seemingly, came to know his father, having been a mere infant at the time of the bitter separation, the writing vividly reflects the untainted aspirations of what a child envisions his or her father to be, particularly in the case of orphans and dejected children.

The year is 1990, and the sun has already attained its zenith in the clear, northern sky.

Disclaimer: The following account has been translated into English from the native language. It relates an essay assignment given to displaced children in a refugee camp attending the town Madrassah funded by charity collected in the local mosque. The essay, along with a dozen other such heart wrenching compositions, was unearthed some 20 years later by a team of construction workers about to demolish the site. It reflects the plight of homeless children. For reasons of privacy, the actual name of the author and the site has not been revealed.

“In a world full of obstacles and opposing forces trying their utmost to quell an aspirant’s advance towards prosperity and success, every individual needs support, a rock or a pillar to lean against. Without the presence of such a force of tranquillity and rejuvenation, a person would be reduced to a seething wreck, unable to do anything productive or indeed worth mentioning. This force of nature, of nurturing and compassion, wisdom and discipline is epitomised in a father; the man who from the birth of his offspring till the time he himself is forced to battle the advances of old age, enables his child to realise its potential, and walk boldly and effortlessly in a sinister and deceptive world.

My father for me has been a source of pride, warmth, understanding and courage, especially when circumstances were particularly grim and nerve wrecking. Being a man of honour and upright as if forged in the very mould of discipline itself, he commands the respect of me and my family members; not through a dictatorial temperament or tyrannical means but through mutual understanding and flexibility. He has the ability to put himself in the shoes of his children and see the world through their perspective; a feat only possible for those gifted with a broad mind and a generous heart filled to the brim with compassion…”

Here, the parchment is torn, and only two sentences scribbled at the very bottom of the page are discernible.

“I know, had my father been alive, he would have been all such things, and more.

I wish that I, too, had been killed in the blast that took him.”

In my mind, I can vividly recall that fateful day in late September when I came across this unassuming piece of forgotten parchment – its profound message of breath-taking sincerity, longing and incautiousness and the almost naive sense of triumphant hope and trust in an unrealised, untouchable ideal. I remember the unceasing manner in which the eloquent words, as each and every alien term gave way to its translated English manifestation, tugged at my deeply suppressed heartstrings and induced in me the urge to vent uncontrollably with an offering of silent tears.

The narrative had hit too close to home.

My father, a zealous GD pilot and a victim of enemy aggression during the 1965 war, with his shining, weather-beaten face and almost childlike grin came looming into perspective. I had been very close to my father and vice versa in a fiercely protective, Air Force-dad kind of way. His death had been, and still is, the cruellest blow fate has dealt me and my scholarly mother. The light in our lives had been mercilessly ripped apart from us, leaving behind a bitter, lonely void still unquenched by the most ardent of prayers, material endeavours, repeated assurances of national medals of honour and religious martyrdom.

You only have one father. Cherish him for as long as you can. You never know when fortune’s hand may dwindle, and days of merriment and careless joy are transformed without a warning into bleak nights of anguish and complete disillusionment.