Learning from the Indian elections, despite Modi’s win 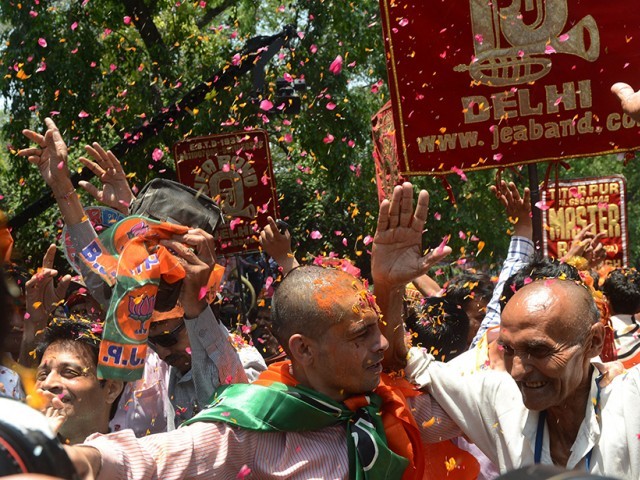 Indian supporters of Bharatiya Janata Party (BJP) celebrate their party victory in front of the BJP headquarters in New Delhi on May 16, 2014. PHOTO:AFP

Despite being upset about Bharatiya Janata Party (BJP)’s Modi Sarkar claiming undisputed victory in the Lok Sabha, I could not help but notice the immaculate election process that is being conducted by the Election Commission of India (ECI).

However, the biggest hallmark of this election process is that, so far, it has been declared as free and fair as it gets. For someone who belongs to a South Asian democracy, the importance of the terminology ‘free and fair’ cannot be undermined. To consider that there are credible institutions in India that can charter such a process despite rampant issues of corruption is something that needs to be greatly appreciated. While Pakistan is still struggling to hold singular free and fair elections which are unanimously agreed upon by all parties and factions involved, India has moved long past this dilemma.

Everyone was out to vote In Bangalore to participate in Lok Sabha Elections. Photo: AFP

The current electorate process expanded over nine phases with an impressive voter turnout of 66 per cent. Not only was this turnout the greatest to be witnessed in history, each voting stage was meticulously planned through. With a total of 11 million government workers and over a million troops deployed during the balloting process, this program has been rightly dubbed as one of the largest human management projects in the world. What interested me the most was that there were 1.7 million electronic voting systems which were distributed nationwide to facilitate an unbiased electorate process.

the Lok Sabha election for the Nagaland parliamentary seat was web-casted to keep a tab on the voting process in 84 polling centres. Photo: AFP

The timing of this free and fair mantra could not have been more ironically juxtaposed with Imran Khan’s recent nine point ‘charter of demands.’ One of the most important demands put forward was to establish a bio-metric voting system for the next general elections. The importance of such a system is crucial for the Pakistani election conundrum which is always blamed for sabotage and rigging. India’s success at creating and using their bio-metric voting system has proved to be an effective tool for large democracies. If a population 10 times greater than our own could easily facilitate such a process, then for Pakistan this is no tough ordeal. Without such a system, rigging would be an inevitable and repetitive consequence that we will have to bear.

It is extremely unfortunate and disappointing that rather than appreciating and learning from this election process, half of Pakistan is busy condemning the victory of BJP, which Pakistan believes to be quite an extremist faction.

I, however, am more concerned about Pakistan’s future electoral process relative to its upcoming Indo-Pak relations. This incident has once again reminded me of the awkward moment of when I first crossed the Wagah border on foot and as soon as I crossed Pakistani domain, a big sign stood there mocking us as I walked past it saying ‘Welcome to India – World’s Largest Democracy’.

Don't be fooled Imran Khan, this is not your revolution