Not every Hindu or Muslim is an extremist, Mr Nayyar 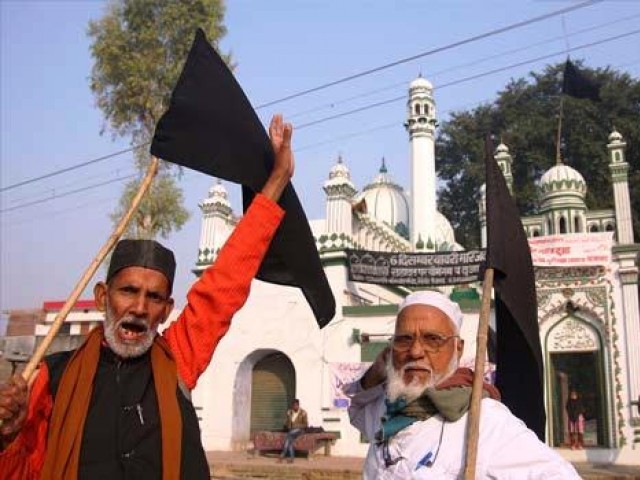 Muslims chant slogans near a mosque to condemn the 20th anniversary of the Babri Masjid demolition in Ayodhya. PHOTO: AFP

This piece has been written with reference to senior Indian journalist Mr Kuldip Nayar’s article ‘Communal Politics and India’s election’ in this newspaper. As a humanist, I genuinely wish Pakistan the very best in the context of development and I have cited some pieces by liberal Pakistani intellectuals and made some statements about Pakistan in this article only in the spirit of constructive criticism.

While I deeply respect Mr Nayar and share his commitment to India’s pluralistic ethos, and I have written a book aimed at addressing and dispelling anti-Muslim prejudices in the Indian context, and have written articles critical of Narendra Modi and the BJP, I do feel that Mr Nayar’s article, while supposedly dealing with “communal politics” in the context of the current election taking place in India, fails to deal with the issue holistically.

For one, as an article of mine points out, it is totally wrong to suggest that only communities qualifying as the religious minorities on the national scale have been victims of communal violence in India (many Hindus also lost their lives in the riots in Muzaffarnagar in 2013 and Gujarat in 2002) or that communally divisive speeches in this country have been a Hindu rightist monopoly (surprisingly, communal remarks by Muslim politicians in India like Azam Khan and Shazia Ilmi during this election campaign found no mention in Mr Nayar’s article). Indeed, it is also true that many of India’s ‘secular’ political parties have appeased the religious minorities, and I am indeed glad that this did find a passing mention in Mr Nayar’s piece. However, on the whole, Muslims and other minorities have made their mark in all walks of life in India, including and not only, politics, cinema, sports, journalism and the academia but even in the security forces and intelligence agencies.

Also, while crimes, even hate crimes, take place in many societies, it is important, that the victims should get justice. In India, not only laypersons but even political leaders like Maya Kodnani, Manoj Pradhan and Ashok Sahu have been convicted for involvement in communal violence, and speaking specifically of the carnage in Gujarat in 2002, more than a 100 Hindus involved in anti-Muslim violence have been convicted.

Moreover, while it is true that Narendra Modi has been acquitted, that acquittal has come from a district court based on a non-binding report of a Special Investigation Team appointed by the Supreme Court, and a court of law operates on the basis of evidence. Perhaps, there genuinely wasn’t enough evidence to prove Modi’s guilt beyond reasonable doubt in the eyes of the district court, but in any case, there are higher courts where this matter will be tried in appeal.

For one, he stated that the demolition of the mosque sparked off the tilt towards extremism among Indian Muslims. While I agree that there was no instance of terrorism by non-Kashmiri Indian Muslims before the campaign for demolishing the mosque started (except possibly the bombings in Bhagalpur in 1989), extremism doesn’t only manifest itself in the form of terrorism or rioting; else, even the demolition of the Babri Masjid was just an instance of vandalism, not terrorism, and wouldn’t qualify as Hindu extremism.

So, on what basis do I assert that Muslim extremism in India predates the demolition of the Babri Masjid?

The most significant example would be the law and order problems created by a very large number of Muslims in response to the Shah Bano verdict, which was a factor contributing to the demolition of the Babri Masjid. Mr Nayar has stated that successive governments have not paid any heed to his idea of having a Hindu temple and mosque side-by-side in Ayodhya, but it is surprising that a journalist of his calibre fails to realise that the matter was sub-judice. In fact, the judgment given by the Allahabad High Court (against which an appeal is pending with the Supreme Court), endorses Mr Nayar’s suggestion.

And while I am far from being a camp-follower of the BJP, I strongly disagree with Mr Nayar when he assertively says that in the current elections, the BJP has not explicitly spelt out its commitment to respecting religious pluralism, and in this context, this article may provide the required background.

Also, I fail to understand how and why securing the life and property of religious minorities is linked to secularism, as though theocratic states are not obliged to do the same, which would erroneously suggest that the state religions in theocracies permit violence against innocent people following other religions. Secularism is about being governed by non-religious laws, and in that context, ironically, the supposedly non-secular BJP is among the few political parties that pitches for the fulfilment of the obligation of a uniform civil code under Article 44 of the Indian constitution.

Mr Nayar critiques the BJP for its stand on the abrogation of Article 370 of the Indian constitution, saying that the said provision is,

“An integral part of the process of Jammu and Kashmir’s accession to India.”

Keeping my personal views on the issue (I do not see a problem with the Kashmiris enjoying a degree of autonomy within the Indian Union) aside, I would like to ask as to how can an article titled ‘Temporary provisions with respect to the State of Jammu and Kashmir’ with ‘temporary’ in its name be integral to the accession.

Mr Nayar, I am quite sure unintentionally, has also made generalised remarks about Indian-Hindus when he says that the demolition of the Babri Masjid showed that the majority community would have its way by force if necessary (though he ironically mentions that the vandals had attacked Gandhians coming in their way, who were Hindus). And even about Indian Muslims (again, unintentionally) when he says that they got radicalised to the extent of not protesting against terrorism, even though they have organised many protests against terrorism and also refused to bury the corpses of nine terrorists among the perpetrators of the 26/11 Mumbai attacks. I am sure he only intended to refer to certain radicalised sections of Hindus and Muslims in India.

Left-liberal intellectuals like Mr Nayar apart, many Indians and Pakistanis validate their deep-rooted nationalist prejudices by exaggerating the problems of the religious minorities on the other side of the border.

However, it cannot be denied that Pakistan, in spite of its overwhelming Muslim majority, is grappling with intra-Muslim sectarian clashes, ultra-theocratic terrorists bombing their own people, ethno-linguistic violence and last but not the least, Muslim extremists targeting the tiny non-Muslim minorities. It is indeed high time that South Asia enters a phase of its history wherein articles on topics such as these seldom need to be written in the context of contemporary developments.