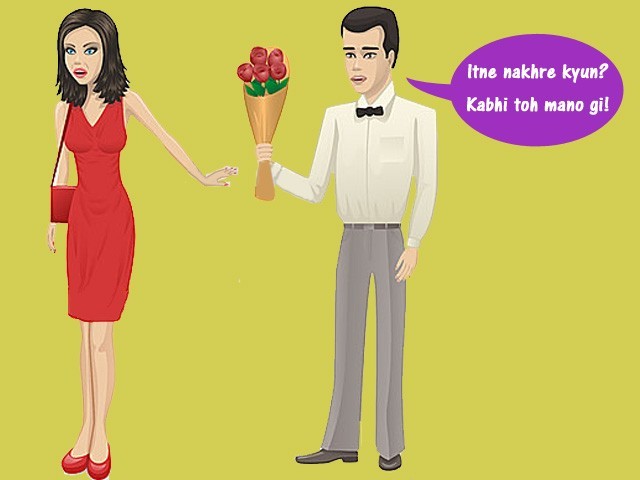 I might construe this ‘nakhra’ as a ‘hard to get’ approach, and continue to harass her until her series of resounding no’s turn to a tired yes.

Sheryl Sandberg makes an impressive argument against the use of the word ‘bossy’, which is often used pejoratively to describe assertive women with ‘executive leadership skills’. In Indo-Pak vernacular, there’s another word far worthier of being thrown before the social media’s firing squad.

The word ‘nakhra’ is more formally used for ‘coquetry’, but in common usage it refers to a stubborn refusal to submit. In each sense, it is used almost exclusively for women, who are referred to as nakhraybaaz. There are many scenarios I can describe where this word is used as a cudgel against women, but I’ll make use of a classic Bollywood music number to illustrate my point.

A male Indian or Pakistani archetype, a cocky hunk with no sense of boundary, dances circles around an obviously uninterested female. He expresses his affection for her in song, makes googly eyes, invades her personal space and inquires if she wishes to be his chamak challo.

She did what? Does she not know that the man is fully entitled to have his feelings reciprocated?

Has patriarchy taught her nothing?

Who on Earth gave her the idea that she’s a free human being with an inalienable right to choose her own friend or mate, and not fall head over heels for the first creep serenading her outside the college canteen?

He doesn’t have to dig deep into his bag of limited vocabulary to pull out the perfect the word to explain the girl’s attitude – ‘nakhra’.

As a man, it’s a word that is extremely handy for me to keep at the tip of my tongue. It can’t be that a woman is simply a little conserved and more discerning of the sort of company she keeps. It couldn’t have been a flaw in my approach or the fact that I’m just not the kind of person she is interested in.

I head over to my guy friends and explain the rejection by calling her ‘nakhraybaaz’ or ‘nakhray wali’, or whatever tense or form of the word fits. I spare my own ego and assert that the fault lies with her… if she’s lucky.

The other possibility is that I might construe this ‘nakhra’ as a ‘hard-to-get’ approach, and continue to harass her until her series of resounding no’s turn to a tired yes. Because honouring her decision and backing off at the first refusal is either proof of my unmanliness or a sign that I don’t like her enough to pursue her, or both! Really, bro, her ‘nakhra’ is just a way of telling you to come at her even stronger. She wants you to put your back into it, crash her wedding, enunciate your love in front of her family and family-to-be and use your nails to leave scratch marks on the carpet as you’re dragged out by her angry uncle.

It is not only in romantic settings that this word is used. A man who refuses to budge in a negotiation may be described with a variety of words from ‘ziddi’ (insistent) to ‘dheet’ (stubborn) that loosely fit the situation. On the other hand, a woman will almost always be accused of doing ‘nakhra’.

It is used far more often to describe nay-saying women than men. At times, when it is thrown at men, it is the feminine nature of the word that is intended to cause the sting.

Patriarchy doesn’t always precipitate as specific flash-words in a language for us to highlight, but ‘nakhra’ is one of the few exceptions. It is a word used consistently to undermine a woman’s consent; discrediting her refusal of something as either prudishness or undue stubbornness. Though I clearly don’t believe in any legal restrictions, I do believe that its use ought to be strongly discouraged.