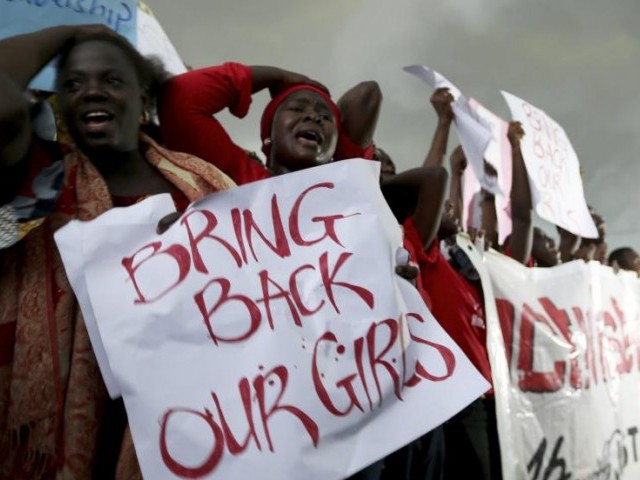 Unfortunately for the girls, they were kidnapped by a religious terrorist organisation, and official Islamic boards across the world will continue to ignore whatever actions Boko Haram takes. PHOTO: REUTERS

300 girls are being sold to slavery in the name of Allah (swt) as you read this; 300 girls, whose only crime was to go to a school and be educated in a system considered far too ‘Western’ by Nigeria’s al Qaeda offshoot, Boko Haram.

Just yesterday, by killing another 300 civilians in the country’s Muslim-dominated north, Boko Haram proved to the rest of the country that it wasn’t going to sympathise with the ‘Western-influenced’ marches taking place in Nigeria.

By the way, this Muslim-dominated north also follows the Sharia law. Looks like Nigeria’s extremists did not stop their “honourable uprising” even after northern Nigeria’s Muslims submitted to live under the Sharia.

Yet, other more ‘important’ matters dominate Muslim politics in Nigeria than armed uprisings that sporadically raid and kill hundreds. Matters as important as legalising child marriages are being put forward by Nigeria’s self-proclaimed representative of Muslim interests, Senator Ahmad Yerima, who himself married a 13-year-old school-going girl from Egypt.

Furthermore, he justifies his actions by claiming that attempts made by other Muslim clerics and Christians, to criminalise child marriages, are against Islam and infringe upon the freedom of practicing Islamic beliefs.

A Taliban uprising in the north-west for the last decade has killed more than 3000 people, though our country’s religious boards only seem to be interested in imposing veils for women. And now that Malala, the Jew-funded demon, has expressed her compassion for the kidnapped girls, Pakistanis are surely going to call this whole affair a Western conspiracy being used to malign Muslims everywhere.

Sad to say, this incredibly ill-thought out prioritisation isn’t limited to Nigeria and Pakistan. 300 missing girls haven’t led to any outraged Muslims burning down their own countries or shooting at local police officers. The Organisation of Islamic Cooperation (OIC), the supposed voice of Muslims everywhere, doesn’t appear to be even slightly shaken by the actions of any terrorist organisation operating in the name of Islam, let alone the Boko Haram’s recent transgressions.

In fact, the only actual achievement the OIC lauds itself over is making blasphemy of the Prophet Muhammad (pbuh) a criminal act and a misuse of the freedom of speech. While the OIC has also called for abolishing female circumcision, it has never concentrated on the practical issues that a majority of Muslims across the world face; issues as simple and resolvable as dowry payments and divorce without accountability.

Instead, because of the OIC’s lack of action NGOs, like the United Kingdom-based Islamic Relief Organisation, are forced to take action and help regular Muslims. This NGO, due to all its hard work, is about to become the UK’s most generous religious group. The OIC has also been completely incompetent in addressing many political issues Muslims face, whether it is the Syrian crisis being inflated to a Shia-Sunni conflict or the ongoing exodus of Muslims in the Central African Republic. Perhaps the only thing it is capable of is preventing prophet-related slander.

Had these 300 girls been fired upon by American soldiers, the girls would have received much more publicity, or maybe if they were Arab or white, there would have been a bigger uproar. Or perhaps, if they had been beheaded by whatever non-Muslim groups could get their hands on them, the OIC would have created a hoopla. But so long as it is a Muslim group, official Islamic boards across the world will continue to ignore whatever actions are taken by Boko Haram.

Of course, this will only be until a Western military operation takes place in Nigeria and they kill everyone will the ulema finally wake up and mourn the “brutal carnage the West brought” and the “suffering of the Muslims of Nigeria”. While the world will pray for the girls’ safe return, Boko Haram and politicians, like Ahmad Yerima, have other priorities.