Kicking off the World Cup: The contenders, part II 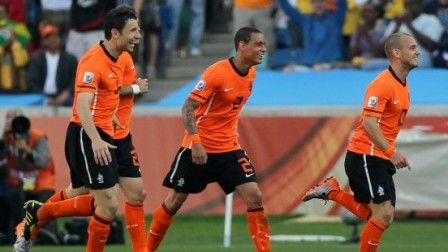 Netherlands, though under the radar, is one of the four teams to win every game they've played so far.

So much has been written and said about the World Cup already that this latest blog post may seem an unnecessary addition; then again, not everyone obsessively follows football and for the sake of the average non-footie-mad person, let’s try to recap the events of the past week.

Continuing with the theme of describing how pre-tournament favorites have fared so far, we come first to Italy, a team that seems to be stuck in 2006. Not only for its persistence with players who have long since faded and a coach asked to repeat the ultimate in footballing success, Italy’s whole approach to the tournament seems to mirror their successful efforts in 2006. Though, that approach broke down two years ago and in any case, This Time It’s Africa. A dull draw with Paraguay was followed by a rather more exciting game versus New Zealand. While in the first, the Italians, in their own words, looked tired, the second match throbbed with excitement as the Azzuri chased the Kiwis fruitlessly for an improbable draw. While they did often threaten and posed serious questions to the opposing defense, especially through midfielders Daniel De Rossi and Riccardo Montolivo, they were ultimately unable to get the job done. Vincent Iaquinta and Antonio Di Natale both looked like strikers on strike against goal scoring and Italy will need them to finish with aplomb for any real success in the tournament. Not even a sparkling return by Andrea Pirlo seems likely to lift Marcello Lippi’s men. They will probably qualify for the next round simply because Slovakia is the worst performer in their group and Paraguay is the best – and the possibility of Italy qualifying even if they fail to win their third consecutive game sums up the situation rather well. It also raises the prospect of the Netherlands versus Italy in the Round of 16, and a repeat of the delightful 3-0 Dutch win in Euro 2008.

Speaking of the Dutch, they’ve quietly carried on winning and escaped the headlines despite being one of only four teams to win every game they’ve played so far (the others are Argentina, Brazil, and Chile). While Robin Van Persie hasn’t exactly set the tournament alight despite his team’s insistence that he would, and while Arjen Robben languishes on the medic’s table yet again, Wesley Sneijder has been punching in the match winning performances like he’s still at the Bernabeu…or San Siro…it doesn’t really matter for the Iniesta of the Netherlands – he just plays on. The media will catch on to him if the Oranje progress beyond the Round of 16 though, just like they did in Euro 2008 when the Dutch threatened to bring back total football. They will comfortably go into the second round after beating Denmark by 2 and Japan by 1 goal, respectively, without looking like they’ve sparked into life. However, this might be a result of teams choosing only to defend against the attacking trio of Sneijder, Van der Vaart, and Van Persie. This has also afforded the team’s defenders, arguably their weakest point, considerable rest. Hopefully Samuel Eto’o and Cameroon will realize that they have nothing more to lose (being the first team to get eliminated) and give the Oranje a real run for their money on Thursday, giving us all a better look at what the Netherlands is really made of.

The much-touted Group of Death has certainly served up some great games, but it has also delivered heartbreaks to both the Ivory Coast and North Korea, principally at the hands (both literally and figuratively) of Brazil. The most successful international team of all time continues to roll on and after the disappointing failure of the 2006 ‘Fab Four’, coach Dunga has crafted a team after his own heart – built on steel rather than samba. Make no mistake about it, the most important players for Brazil in this tournament are Maicon, Lucio, and Felipe Melo (in that order) – not Kaka, Robinho, and Luis Fabiano. The man linking these two groups is the player of the tournament so far: Elano. Not only has he scored twice, he has also been far more critical to orchestrating Brazil’s famed attacking play than any of their stars. And with great effect, too. Freed of the burden of ultimate creative responsibility, all three attackers have played with undoubted élan, illustrated memorably in Luis Fabiano’s first goal against the Ivory Coast. His second wasn’t quite as brilliant as it appeared on first viewing, and the reappearance of the ‘hand of god’ probably played a part in Tiote’s vicious tackle on Elano. Dunga must be praying in relief after his only pure linkup player escaped severe injury. Notwithstanding the lack of depth in the midfield, Brazil is easily the best side at the World Cup so far, and the misfortunes of the European contenders (especially Spain) will have boosted expectations of another Selecao triumph.

Portugal, however, are the side best placed to change that, something no one could have predicted after they got outplayed by the Ivory Coast in their opening World Cup fixture. Second best in the midfield despite the presence of Deco and toothless in attack despite the presence of none other than star player and captain Cristiano Ronaldo, the Portuguese were far from flowing in their opening fixture. Ronaldo’s description of goals being like ketchup – difficult to come by initially, then bursting all at once when they did come – was fodder for ridicule in headlines across the world before he was proven right. Portugal unleashed the most embarrassing score line of the tournament with seven goals against North Korea, six of them in the second half, three of those in a ten-minute interval. It was an emphatic reply to the doubters and even Ronaldo scored to end a much-publicized goal drought. The lack of steel in the Korean midfield allowed Tiago to capitalize with several classy through balls and tactical switches by both teams led to Fabio Coentrao running riot from left back. The lopsided score line, however, reflects both extraordinary finishing by Portugal and half-hearted defending by their opponents – a combination they are unlikely to find again in their upcoming matches. In fact Portugal were on the receiving end of a similar thrashing the last time they faced off against Brazil, in an international friendly that ended 6-2 in favor of the South Americans, with a Fabiano hat trick. Their deficiencies while going forward will certainly be exposed despite the best efforts of former Manchester United trainer Carlos Queiroz – but for everyone’s sake, let’s hope they continue to score freely. As it stands, they’ve almost guaranteed a spot in the Round of 16 even if they lose their final game, and should be more worried about facing Spain or Chile, not Brazil.

Spain and Chile, of course, are the two teams almost guaranteed to exit Group H with success, although La Furia Roja is not the one with the impeccable record, despite expectations. Touted as overwhelming favorites for South Africa 2010, the Spanish team won 34 out of 35 games prior to kickoff against Switzerland and was promptly defeated in a David vs. Goliath battle in which Spain spent 90 minutes in vain searching for a goal. Shades of Barcelona’s defeat against Numancia in 2008 were evident as one team focused only on scoring and the other team focused only on defending, yet somehow scraped through with a win. For all their pretty passing and wonderful movement, Spain were unable to score, but it was more a case of bad luck and poor finishing rather than poor overall play. Andres Iniesta in particular was moving wonderfully with the ball at his feet but his teammates couldn’t exploit the opportunities he created for them. Jesus Navas, his replacement against Switzerland, buzzed with enough verve in ten minutes to earn him a starting spot against Honduras, and Fernando Torres regained enough fitness to start the same must-win game. Although both would fail to be at their best, in particular Torres who missed two easy goal scoring chances in the first half, the added threats helped free David Villa. The new Barcelona signing was full of hunger and his first goal was almost completely a product of individual brilliance, twisting past three perplexed defenders to smash in a dream finish. He continued playing wonderfully well and Vincent Del Bosque must be grateful that at least one of his players regained the ability to shoot. Goals must start coming from other players, though, not only for a genuine push towards the World Cup title but even to qualify against Chile, who will certainly look for a chance to score against the aging duo of Carles Puyol and left fullback Joan Capdevilla.

The very fact that Spain is in crunch game to qualify for the second round of the World Cup proves that this tournament is far from dead. In fact, it has been fascinating to watch for most football fans that have followed the buildup to this tournament and are aware of the stories behind the teams. A string of upsets suffered by European contenders has converted every game into one of significance and even draws are meaningful results, making for compelling viewing indeed. Spain, England, France, Germany, and Italy have all performed below expectations at this tournament, leading some commenters to conclude that a defining feature of the group stages has been the fall of the European sides and success of the South American ones. The results substantiate that view, although much of the tournament is yet to be played and no team can afford to relax yet.

Germany’s defeat against Serbia is the best proof of that, although the red card to Michael Klose played a big hand in that result as well. Germany’s response to that result has been particularly notable, however – no public inquests, no fighting amongst team members. In contrast, France’s wounds have been largely self-inflicted, resulting in one of the most sensational (and unsavory) dramas of the World Cup so far. The three defeats accurately represent the state of the squad, although not the talents of the players involved. It’s a similar story for the Three Lions as they failed to score against Algeria and the intervention of Frank Lampard was required to smooth things between captain John Terry and coach Fabio Capello. Their game against Slovenia is surely one to look forward to and Wayne Rooney in particular will look to stamp his influence on the proceedings. He could do worse than try to emulate Lionel Messi, who has been at his imperious best while leading Argentina to three consecutive victories (despite not scoring any goals) and has carried the pressure of performing remarkably well. Diego Maradona’s side may have entered the tournament on the wings of millions of prayers, but they are repaying that faith with some of the best attacking football on display. Let’s hope it continues!

We should be surprised our cricket team ever wins

Cricket, you broke my heart

The protest must be personal