Why are women overweight anyway? 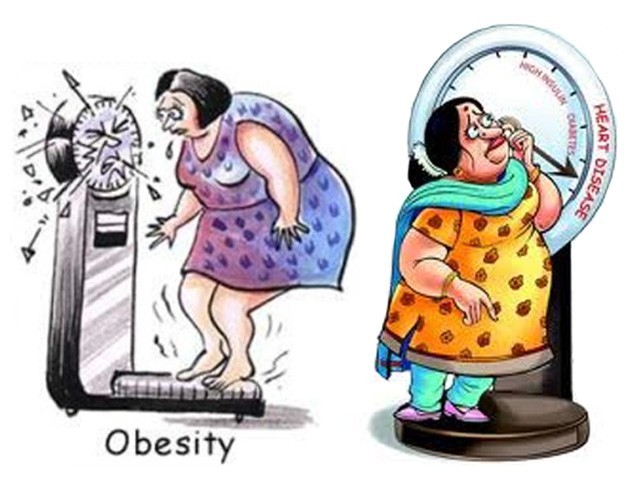 Obesity in women stems partly from attitudes surrounding the fairer sex and partly due to systemic constraints.

Before you take out your kolhapuri chappal or stiletto to beat the hell out of me, have a look at the facts first. Data from the World Health Organisation (WHO) suggests that women are far more likely to be obese than men. And this situation isn’t any better in Pakistan. According to the Journal of Pakistan Medical Association, Pakistani women trump obesity rates as compared to men across the board. Women in urban areas are far more ‘heavier’ than their rural counter parts, with as much as 40% of the urban women in the age bracket of 45-64 being obese. Guess there just isn’t enough pressure placed on older women to be thin and look a certain way.

Why do women become overweight to begin with?

Obesity in women stems partly from attitudes surrounding the fairer sex and partly due to systemic constraints. Let’s take a look at some of the factors contributing to this problem.

Girls from an early age are educated about knowing their place in the public or private sphere. Boys are allowed to play outside in open spaces whereas the girls are restricted to playing indoors and cannot be outside in the afterhours. From the outset, this defines the level of physical activity men and women engage in. Of the children that do make it to school, the sports that girls engage in are generally less physically taxing than those played by men.

Polling children from kindergarten till Matric yielded the same results across the board. Children start with similar games like pakran pakrai and baraf paani but as they progress, boys engage in more recognisable sports whereas girls stick with informal physical activity. Lack of facilities, unavailability of ample sports equipment for both genders and paucity of physical education teachers in public and private schools influence a girl’s right to play.

Competitive sports or continued physical activity is non-existent post school years. Except for women from privileged backgrounds, we hardly see women and sports together in a single sentence let alone in actuality on ground. Most women balk at the idea as they fear being socially chastised.

“What is the point of investing in something that you won’t be able to continue as it will create far more trouble than good?”

Then there is the issue of eve teasing, harassment in public parks and the moral brigade; as if ‘bulk’ is a sure fire way of stopping harassment of women in this country.

“I can’t go out for a walk without a male accompanying me and even when I am walking with my male or female friends, people pass off-hand comments about us and the way we are dressed. While what I wear is nobody’s business, I try to dress as modestly to avoid such situations. Can’t a woman be on her own without the fear of being the subject of ridicule or eve-teasing?”

Let’s have a round of trivialities.

Answered without a huff?

If you are scratching your head wondering if Sania Mirza is an admissible answer, you are amongst 99% of Pakistan’s population who think so.

How many female driven sports activities have you seen in the past five years other than wrestling? Policy makers and social scientists take notice.

Either due to cultural constraints, fear of harassment, poor incentives or just personal preferences, most women end up with desk jobs whereas travelling, dealing with individuals in the field, on-ground market surveys and sales are handed over to men. While some private sector and non-profit sector jobs blur these boundaries, most companies are devoid of a-gendered field force. Consequently, the physical activity from desk jobs is far lower than outdoor activities. Thus, despite their rotund bellies due to niharis and desi ghee kay channay on field visits, men are still in far more physically demanding jobs than their women counterparts.

Just a few months before marriage, men and women rush to the gyms, crash diet or take a lot of magic pills and potions to reduce their chub because wedding pictures on Facebook, Instagram etcetera is the only reason for physical activity. Post wedding, individuals just let themselves go as if after the cat and mouse game everything goes. Women pile on the pounds post marriage due to a stressful married life arising out of family lunches, dinners, breakfasts, managing expectation of parents and in-laws or just lack of physical activity due to a maid doing your bidding.

Hira, a housewife, says in an agitated tone,

“Our culture is based on pleasing others. Many times, I feel pressured to compromise and eat oily foods, chug carbonated drinks or overeat just so that my hosts feel they have been hospitable enough. No means no! If I don’t want to eat food, how is that your problem? And why do I have to justify that I am not on a diet?”

And then there is the pregnancy!

Quite a lot of women, educated or otherwise, hold on to the myth of ‘eating for two’ as per the familial pressure to eat for a healthier offspring. Despite working out during pregnancy, which is recommended by health and medical professionals as being healthy for the child and mother, they still choose to listen to the ‘tradition’ or totka that has been passed on in their family for generations of taking it easy. Not eating healthy, no physical activity and disturbed sleep patterns result in bouts of depression, which can only be cured through calorie dense ‘happy’ foods and the cycle continues after the child is born.

“I often go through thick and thin. I try to eat less and stay slim but neither do I have the money to eat healthy foods nor between a new born or work-life problems can I find time for myself to do this exarsize, wexercize that you rich people do.”

The bitter truth is that women do live as second grade citizens in Pakistan. The liberties afforded to men are nowhere close to women. They often have limited control over the choices they can pursue vis-à-vis a healthy lifestyle. ‘Log kya kahein gay’ (what will people say) is enough to shut a woman up. As a result you have an obesity epidemic that is eating away at 50% of our population.

This is not to say women are free from blame. Most often the snide remarks levelled at women for being too fat, too thin, too sanwali (dark), too gori (fair), too independent or too homely are levelled by their own women folk. If only these women knew how much they bring their own lot down with such comments. It may be a generalisation, but there are as many women fighting for their rights as there are working against it.

A healthier and fit female means healthier future generations; grant them control over their own bodies at least.

Samaj sevik, marketeer, conversationalist. After shedding half the man he used to be, following his departure from his biscuit industry job, he now runs a fitness consultancy called Beyond Fitness (www.facebook.com/beyondfitpk), giving a no-nonsense advice on matters pertaining to health and wellness.

Weight loss: How I became a big fat-loser!