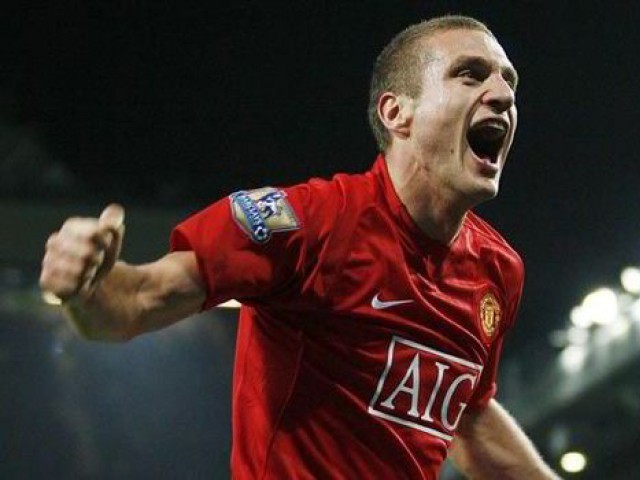 Aggression, passion and fearlessness is what defines Vidic, for he put his body at stake – diving, jumping, flying around to sniff out any kind of danger posed by the opponents. PHOTO:AFP

It’s always hard to let go of someone who has been the backbone of a team for over eight years. Manchester United captain and central defender Nemanja Vidic is all set to leave the club at the end of the season.

Giving his farewell speech to his supporters and team mates. Photo:AFP

Vidic, 32, has already signed a contract this year in March, with Italian giants Inter Milan and will join them from next season. However, Tuesday night the Serbian played his last home game for Manchester United at Old Trafford and was given a rousing farewell after the game against Hull City.

In the times when defenders have not been able to earn the same recognition and fame as strikers, this Serbian warrior stood like a wall against the storm and helped defenders garner some much deserved attention and applause.

Aggression, passion and fearlessness is what defines Vidic, for he put his body at stake – diving, jumping, flying around to sniff out any kind of danger posed by the opponents.

“Nemanja is a warrior, he is a natural defender. He loves it. When the ball comes into the penalty box, the one player you know wants to get it cleared is Vidic.”

The commanding centre-back embodied everything, that was to be seen in the club captain on and off the pitch, and his strength and aggression were the key attributes in having the whole Old Trafford crowd enchanted by him.

Vidic was signed from Spartak Moscow in 2006 for seven million pounds in the January transfer window, a deal which was termed ‘almost a hijack’ as Italian club Fiorentina had almost secured his signature but the deal couldn’t happen at the last moment as Manchester United made a last minute entry to entice him to join the team at Old Trafford.

His early days were not so good, as he found it hard to establish himself in the heart of English champions; he made his debut for Manchester United on January 25, 2006 against the Blackburn Rovers. After the initial hiccups, Vidic formed a partnership with Rio Ferdinand in the centre of defence, which became one of the most formidable partnerships in the European Football.

Nemanja Vidic and Rio Ferdinand have been part of a Manchester United defence that has kept 28 clean sheets this season. Photo: AFP

The 2008 season was the pivotal for Manchester United as United conceded just 22 goals all season en-route to winning the premier league title. Vidic was claimed to be one of the main reasons why they secured a victory, as he started every league game with United, keeping a record run of 14 consecutive clean sheets in premier league matches. The defence or the goalkeeper may be said to “keep a clean sheet” if they prevent their opponents scoring any goals during an entire match.

During his time at Old Trafford he had some disappointments too, when he was handed red a card in a match against Liverpool, which United eventually lost 4-1. And then in 2011, Vidic twisted his knee during United’s champions’ league clash against FC Basel, after which he was ruled out for eight months.

For Manchester United Vidic made 299 appearances and scored 20 goals, he will round it off by making his 300th appearance for them in their final game of the season against Southampton on Sunday.

Nemanja Vidic was a superb signing by Sir Alex Ferguson and somebody who has dedicated stellar service to the club. He will rightly be regarded as a legend and will leave a gap at the heart of the defence at Manchester United. The club might find it hard to fill the shoes of someone with such stature.