Will Pakistan-India relations survive if Modi comes to power? 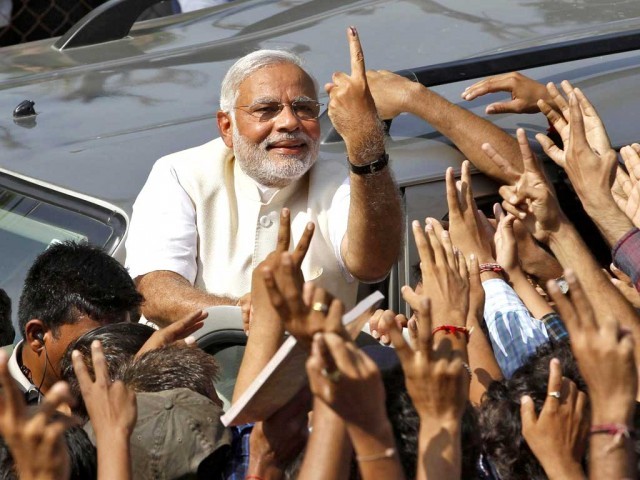 India primes itself for a stronger anti-Pakistan stance and fails to reciprocate with the same vigour, even as Islamabad appears to aspire to settle things between the two neighbours. PHOTO: REUTERS

“The scenes will return, like deranged ghosts, to haunt those of us who were at the graveside to witness the burial of a secular dream. The screams of exultation with each blow of a pickaxe, each thrust of a rod, each dome that came crashing down. If there were no implements, the frenzied hordes would have used their bare hands to the same effect, so powerful was the poison that coursed through their veins in those few hours of madness” (Dilip Awasthi Ayodhya)

It is now clear, from various reports, that in the Gujarat Legislative Assembly elections, 2002, Bharatiya Janata Party (BJP) used the Gujarat pogrom effectively to consolidate Hindu sentiments and the majority Hindu vote. The result was an overwhelming victory for the BJP. It is a pity that today, the same contender, Narendra Modi, finds it indispensable to play the anti-Pakistan card for Hindu consolidation. For those concerned with India’s democratic and secular fabric, this persistent politics of hatred certainly marks the end of India’s tryst with destiny.

In a recent speech, Modi vowed to attack Pakistan and bring Dawood Ibrahim to India, if he comes to power. Although, it’s the similar jingoistic election stunt as conquering the Delhi Red Fort stunts by Jamaatud Dawa and Difa-e-Pakistan Council. But such a statement, from the probable prime minister of the world’s biggest democracy, exemplifies what the future under a BJP-dominated government may look like for the region.

Not to deny that the ‘deep state’ on both sides are avowedly against each other. But unlike India, all major political parties in Pakistan that hold considerable electoral leverage, like the Pakistan Peoples Party (PPP), the Pakistan Muslim League-Nawaz (PML-N) and the Muttahida Qaumi Movement (MQM) – except the Pakistan Tehreek-e-Insaaf (PTI) – want better relations with India. On the contrary, in India, even the leftist parties that represent secular credentials, like the Indian National Congress (INC), hark back on jingoistic patriotism of the BJP when it comes to normalising relations with Pakistan.

The problem with the BJP is that it has created a highly chauvinistic narrative on Pakistan, based on preaching hatred that goes back to the partition days. In the domain of foreign policy, Modi’s various statements manifest that the party retains a maximalist position whereby the totality of India’s relationship with Pakistan hangs on the issue of cross-border terrorism.

Of late, Pakistan appears to be pushing for a series of dialogue with India on all contentious issues, keeping its traditional position of ‘let’s talk Kashmir first’ on the back-burner and focusing more on bilateral trade, stabilising the line of control (LOC), management of borders and the likes. Unfortunately, India primes itself for a stronger anti-Pakistan stance and fails to reciprocate with the same vigour, even as Islamabad appears to aspire to settle things between the two neighbours.

However, last time the two countries had a major breakthrough was during the BJP government in Delhi and the Nawaz-led civilian government in Pakistan. Whether Modi can turn out to be another Atal Behari Vajpaye is yet to be seen.

It is imperative that Modi and the BJP realise that Indo-Pak cooperation is indispensable for regional stability. It also necessitates that instead of such imperialistic statements, India must play a more positive role in the region.