Never let me go: A film that asks questions 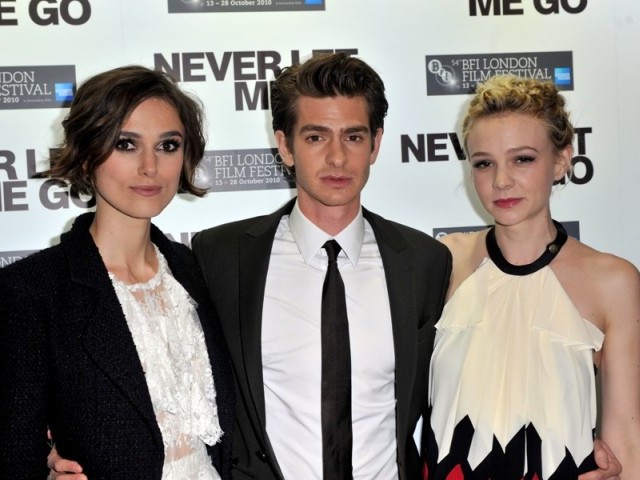 Yesterday was the first day of the 54th BFI London Film Festival-and what a start it has proven to be. The opening night gala of Never Let Me Go, a film by Mark Romanek (acclaimed director of One Hour Photo) does not fail to impress. The film has a talented, young, British cast led by Keira Knightley (The Duchess 2008), Carey Mulligan (An Education 2009) and Andrew Garfield (The Social Network 2010).

Based on the Booker Prize shortlisted novel of the same name by Kazuo Ishiguro, Never Let Me Go is a dystopian drama set in an alternative world, in which a ‘National Donor Programme’ creates human clones to be used as organ donor vessels. While the idea of human cloning has recently been depicted in films (The Island 2005,Moon 2009), Never Let Me Go focuses on questions of the humanity and soul of clones.

Kathy, Tommy and Ruth, played by Mulligan, Garfield and Knightley respectively, live in Hailsham House, a quintessentially British boarding school, used as a facility to house young clones until they become adults, or reach donating age and move to ‘cottages’ where they then continue donating until they die, or ‘complete’.

The clones are sheltered from the outside world and educated from birth as organ donors. They are conditioned to never question their fate and as a consequence, do not fight against it. This unusual backdrop allows the audience to immerse itself in a world where cloning is accepted and gives it the refreshing scope to focus more on the existential elements of the debate.

Fundamentally, Ishiguro focuses on what happens when humans are faced with their own mortality. “The emphasis falls on how people accept their fate…this isn’t a story about people running away or escaping it’s really looking at what happens to us as human beings…when (we) feel trapped and that time is running out.”

Until you add Keira Knightley to the mix. Hand in hand with Andrew Garfield, the film starts careering towards Average-Town.

As the protagonists grow during the film, a natural love triangle emerges with Knightley playing the part of the agitator-cum-villain, keeping the true lovers, Kathy and Tommy, apart. However, she plays her character, Ruth, so one-dimensionally that any potential compassion we should feel for her as a clone sentenced to an early death is eliminated.

Garfield’s portrayal of a clone raised in a world without outside human contact is ostensibly childlike and makes his character virtually asexual. This undermines the credibility of the supposed build up of sexual tension between Tommy and Kathy.

While the film places a “positive light on human nature”, the clones’ resignation to their own fates, reduces the empathy we feel towards the characters. Their lack of fight, which allows us to question the bigger what ifs of the universe, ultimately makes for a lacklustre film. On top of it all, Romanek’s almost palpable fear of moving away from Ishiguro’s book, is as much of a detriment to the film as Knightley and Garfield’s acting.

Carey Mulligan triumphs and is fast emerging as a talent who can hold her own against anyone. In Never Let Me Go she just about holds them up.

A London-based filmmaker. She has lived in Barcelona, St. Petersburg, Colombo and Karachi and writes on films. She tweets as @aleyhaa (twitter.com/aleyhaa)

Fifty Shades of (messed up) Grey

Tim Burton might have missed the mark with Big Eyes