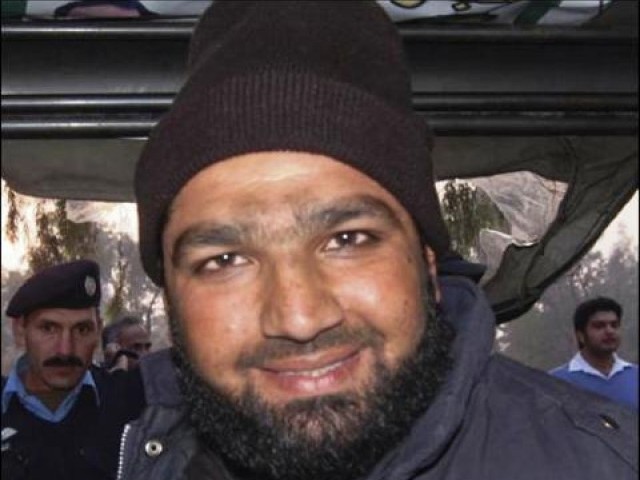 The very idea of a mosque, a sacred house of worship, being named after a man who attained his glory by murdering another man in cold blood, may reasonably offend certain people. PHOTO: REUTERS

I was spending a lazy afternoon lounging in the Osama bin Laden library, bemoaning the dire lack of buildings honouring our local murderers, when my Smartphone informed me of this fascinating new development.

I learned of a mosque being erected in Faizabad that is to be named after the man who killed the former governor of Punjab, Salman Taseer. The very idea of a mosque, a sacred house of worship, being named after a man who attained his glory by murdering another man in cold blood, may reasonably offend certain people.

This is disgusting.. There's a Mumtaz Qadri mosque being built in VIP Ghouri Town in Faizabad (near Islamabad) pic.twitter.com/UbrFIgIXFz

So there's a Mumtaz Qadri mosque being built near Islamabad? Oh man. This country.

I, on the other hand, gave up a long time ago trying to convince people to not revere criminals. I don’t make the trends; I merely follow them. So in that spirit, allow me to present my recommendations for new crime-themed venues expected to pop up around Pakistan’s capital city in the near future.

Named after Muhammed Ejaz, the serial killer responsible for the deaths of three innocent men as part of his crusade against homosexuality, the restaurant serves Pakistani and continental dishes for the discerning foodie.

Though the arrested killer now expresses regret over his actions, the conservative owners of this up and coming restaurant in Blue Area, Islamabad, have chosen to lionise him by renaming their establishment after him.

The restaurant also possesses a permit for sale of alcoholic beverages, mirroring the irony of its self-righteous, criminal namesake having sexual relations with the men before attacking them.

The proud owners of this popular stationery and book depot are now renaming their shop after Javed Iqbal, the man who confessed to murdering 100 people back in 1999. Though the criminal died in 2001, the store owner has made the decision to keep his name alive.

When approached for comment on the controversial move, the owner said,

“All my friends are doing it!”

He was referring to the recent rise in establishments named after known criminals.

The store’s logo depicts a red brick to symbolise the life and crime of the brutal “brick killer” from 2005. The psychopathic serial killer responsible for 14 murders, carried out with a brick, is to be honoured with a new drug store opening up in G-8.

Furthermore, the store is promising to hand out all drugs over-the-counter to customers of all ages, without demanding prescriptions, as part of its opening day celebration. This, again, in honour of Amir Qayyum, who happened to be a notorious drug addict.

This high-end Mexican-themed café in sector-F, Islamabad, is expected to open its doors to the fine people of the twin cities, in a few short weeks. On its launch ceremony, the café expects to welcome big-name celebrities from Waziristan and Paktika province of Afghanistan, including (names redacted).

Our reviewers award their death-by-chocolate pastry an impressive 4.5/5 stars, though they advise patrons to avoid the red velvet cake, which may contain dodgy ingredients.

I expressed my confusion to the veteran cosmetologist from I-8, regarding her decision to name the beauty parlour after a nine-month-old Musa Khan charged with attempted murder. The embarrassed owner admitted that she wanted to name her store after a murderer in accordance with the ongoing trend in Islamabad, but had no idea of Musa’s real age.

She regrets her hasty decision and is currently studying a list of Pakistani mass murderers to find a new name for her salon.

Pakistani murder victims die twice; once at the crime scene and a second time when throngs of the criminal’s supporters, backed by the silence of an entire nation, arrive to garland him.

Unsurprisingly, this will become an opportunity for Qadri-apologists to hack our liberals with their own double-edged sword of ‘free speech’. So be it. Your right to publicly praise terrorists and murderers is seemingly protected under the umbrella of free expression (when nothing else, from criticism of the Army to scrutiny of Pakistani culture, really is).

But the next time your Eastern neighbour points and laughs at you, or the ‘dreaded Western media’ portrays you in a negative light, know that it won’t be malicious propaganda. It’d be because your capital city, bearing the name of your state religion, has a library named after Osama bin Laden and a mosque named after Mumtaz Qadri.