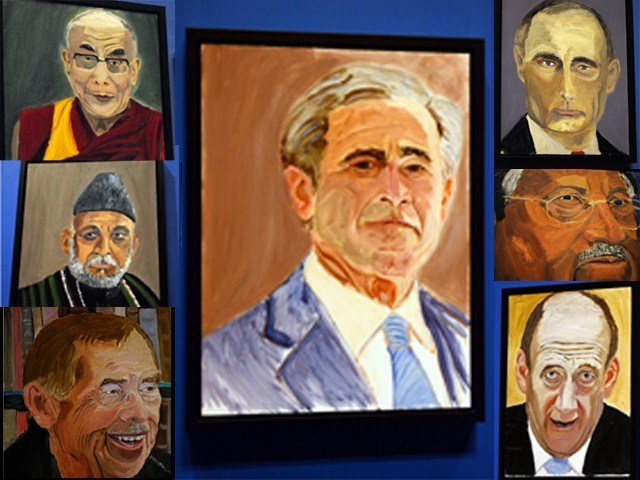 I am disappointed that Mr Bush didn’t take advantage of his new leisure activity to paint incidents from the real world – a world full of destruction, death, casualties and warfare – that surrounded him during his presidential years.

“Painting is a blind man’s profession. He paints not what he sees but what he feels; what he tells himself about what he has seen.”

The 46th ex-governor of Texas as well as the 43rd former president of the United States (from 2001 to 2009) and now an artist, George W Bush has surprised the world with his first ever solo art exhibition ingeniously titled ‘The Art of Leadership – A President’s Personal Diplomacy’.

The exhibition opened at the George Bush Presidential Library and Museum in Dallas and it will run from April 5 through June 3, 2014.

Former president Bush, who has taken up painting as a leisurely pursuit since leaving the White House, painted dogs, cats, still life and some unusual self-portraits earlier. However, this time he has opted to paint convoluted art series of various world famous political personalities.

These never-before-displayed portraits include eminent world leaders from the peace-spreading Dalai Lama to Israeli politician-cum-lawyer and former Prime Minister Ehud Olmert; from the unsmiling Russian President Vladimir Putin to the late Czech President Vaclav Havel; and from quite a detailed portrait of former Pakistani president Pervez Musharraf to one of Afghan President Hamid Karzai in traditional dress. In an introductory video to the exhibit, produced by the History Channel, Bush revealed,

“I spent a lot of time on personal diplomacy and I befriended leaders and learned about their families and their likes and dislikes, to the point where I felt comfortable painting them.”

He further added that painting these portraits gave him a chance to convey the feelings he had about them since he had gotten to know them well during his presidency.

To some extent, it seems that Bush tried to show his level of comfort with diplomatic relations, his foreign policy network and the brighter side of his presidential years in the White House through these 30 oil-on-board amateur portraits of world influentials, which according to art pundits are actually copied from Google’s image search.

Although he has used his brush strokes and palette to place an anecdote of his ‘wholesome’ affairs on the diplomatic front in these paintings, interestingly, what’s missing in the series of portraits is the darker side of his presidential years; the most terrible and iniquitous aspects of Bush’s tenure. Yes, I am talking about the catastrophic drone attacks that the Bush administration began in 2004 and passed on to Obama as a legacy. I am talking about the invasion of Iraq in the name of weapons of mass destruction (WMD) and the Afghan war in the name of a war on terror, all of which resulted in the most horrible bloodshed and massacre of more the one million people. There is no exaggeration and one can easily Google the photos of horrific acts of torture and shocking acts of interrogation used by the officials at these camps.

Ironically, painting allows a person to become entirely engrossed in the process of interpreting one’s existence and seeing humanity in a new way. The painting unwraps the world’s cloak-and-dagger and brings its secrets to light. It is an attempt to replicate the foundation of powerful artistic impulses of the character and accept the emotionality of humanity.

However, the ex-president didn’t utilise the persuasiveness of art and moral fibre to paint a true picture of the populace. In fact, he cleverly covered up the realism and factual truth of all the transgression and created a perfectly bogus effect of civilised decency in his paintings. He didn’t paint the worst destruction and most horrific acts performed during his presidency. And this is why the portraits painted by Bush seem incomplete.

They are bereft of significant characters such as visuals of torture and mistreatment at detention camps, portraits of acute sufferings of the injured and powerless prisoners, depictions of helpless widows and raped women, and pictures of orphaned and homeless children.

And most importantly, he failed to portray the roles of Dick Cheney, Colin Powell and Condoleezza Rice – the real partners in crime.

I am disappointed that Mr Bush, who left the White House with extremely low support and ratings, didn’t take advantage of his new leisure activity to paint incidents from the real world – a world full of destruction, death, casualties and warfare – that surrounded him during his presidential years. I think the portraits were the best opportunity for him to look back, reflect and convey his own observations, especially, since he signed his paintings with ‘43’ – a clear indication towards his tenure as the 43rd president of the US.

Painting is believed to be evidence of sensitivity, civility, self-examination and soul searching. On the contrary, Bush has once again showed his supreme ability to skilfully create a description devoid of reality and truth. In no way, has he shown any impression of an artistic man who scrutinises his own conscience, thoughts and feelings, and is inclined towards empathy, mercy and leniency.

A fictional narration, a fabricated legacy or a soft post-presidential persona cannot be painted with these warm, friendly and gratifying illustrations or portraits. It is quite impossible to erase the past mass misdeeds just by exhibiting a few light and ‘happy’ pieces of art.