The bloody world of dog fighting: Victory or death, there is no mercy! 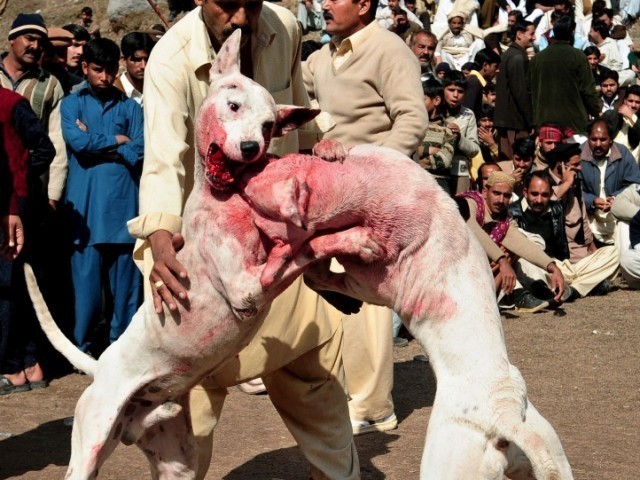 An intense dog fight can easily carry on for an hour. At the end of this dreadful sporting event, you’ll see dogs with ghastly injuries: ears torn apart, windpipes ruptured, eyes gouged out and tongues bitten off. PHOTO: AFP

With the ongoing global and national humanitarian crisis that I have been witnessing, working on and voicing out, I had never fathomed the thought of discovering a blood sport that would send shivers down my spine. It may seem outlandish to some in Pakistan to show unease over animal rights, while we all know a bit too well how our basic human rights are persecuted.

Nonetheless, blood sport, of any kind, is never acceptable and should not be tolerated in any way.

Recently, I came across a Facebook page that encouraged dog fighting. Then, I saw a few horrifying videos of this gruesome sport that can be easily accessed on the internet. Until recently, I imagined this sport to be an inclination of foreign lands; yet, as it turns out, this activity is quite the fad in the rural backdrops of our motherland.

A snapshot from Dogs fighting in Pakistan Facebook page

Dog fighting is a sport that has been banned in Pakistan. The organisers of this illegal sport can be sentenced to jail for up to six months and would also be liable to pay a fine. However, law enforcement authorities seem to have turned a blind eye to this deeply rooted and sickening mode of entertainment. Thereby, these tournaments are carried out unofficially via scheduled meetings by breeders, who decide the fight dates and the venue.

Moreover, you will find hoards of people indulging in this bloody passion. These people have a fairly tinted concept of entertainment where their snarling dogs battle, tear and bite in duels that lead to either victory or death.

There is no mercy.

There are hundreds of breeds of ‘man’s best friend’ that are used for the purpose of dog fighting. Bully (a type of Mastiff), Naagi, Dabba, Gull Dong, Gull Terrier (not the Bull Terrier) and Pit bull are the breeds of dogs that are trained and bred to fight most commonly in Pakistan. Millions of rupees can be at stake for the masters of the winning dogs.

A kilogram of raw meat, 250 grams of oil mixed with desi butter, grinded pieces of chicken and almonds along with two litres of milk are generally the daily dietary requirements of breeding these dogs. On everyday basis, the training includes a minimum 30-minute-long swim in ice-cold water, running long distances and ending the day by hunting down a live chicken. And here I thought we were a poverty stricken country that couldn’t sustain even basic food requirements.

Pakistani owners urge on their dogs as spectators watch a dog fighting tournament outside the village of Lora in Abbottabad District. Photo: AFP

Most of these fights take place in the interior parts of our provinces. The fact that these fights are illegal doesn’t curtail large numbers of people coming out to witness this appalling entertainment. The fun infused with this outing has its fair share of sadism and utter disregard for animals. Audiences of this event find some sort of sadistic pleasure in watching these beasts faceoff, in which they see them ripping each other apart into shreds.

An intense dog fight can easily carry on for an hour. At the end of this dreadful sporting event, you’ll see dogs with ghastly injuries: ears torn apart, windpipes ruptured, eyes gouged out and tongues bitten off.

What is worse is that if the master of the losing dog calls the fight a quit in between, he will club his hound with hockey sticks, electrocute it, poison it with naphthalene or simply just drown it with its legs tied. The master does this because his brittle ego has been punctured.

This is not an organised sport. It is commonly hosted by a selected few who are often the owners of these dogs. In most cases, I found out that there are specialised kennels that offer these dogs for sale. These suppliers advertise them as “bred only for the purpose of fighting”. Passion for this blood sport runs high as the masters of the dogs end up paying an enormous premium for a Bully or a Pit bull.

It might be difficult to determine where the line between entertainment and vicious pleasure for such activities is drawn. It should not come as a surprise then that there is a high price on the dogs that win accolades for being the most menacing in the country. Word does get out in this obscene sport and the dogs end up being smuggled in harrowing circumstances to find new owners that are no less ruthless than the last.

The Pakistan Prevention of Cruelty to Animals Act that dates back to 1890 is in accordance with the government’s wildlife department and is responsible for tackling such violations of animal rights. Unfortunately, funds to deal with animal rights in the department have dried up. Hence, the law that should prevent dog fights, camel fights, bear-baiting and the likes is violated all over Pakistan.

Animal rights might be a far cry, but where is our intellect and our humanity?

For entertainment purposes, is it alright to breed dogs in order to have them kill each other?

I wouldn’t have given so much thought on the topic under discussion, had I not come across Facebook pages, websites and YouTube videos promoting this ghastly form of leisure. It is heart wrenching to see people indulging in such barbaric activities.

To hope for the government to take any serious note of this and those promoting such activities to stop may be a divergence from reality but then again, there is no harm in hoping.  After all, animals also teach us to be human.