Common sense, not so common in Pakistan: 12-month-old baby told to appear in court, what’s next? 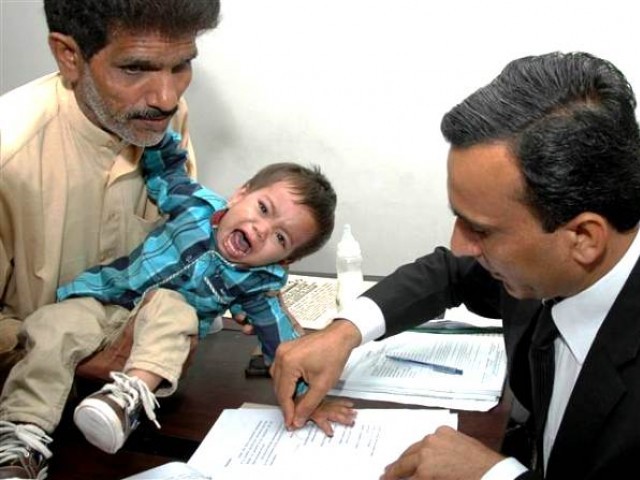 Pakistan would make developmental psychologists all over the world proud.

Asian children (namely those from Hong Kong, Singapore and Shangai) seem to be smarter to the world. But children in our part of the world (vis-à-vis the subcontinent) are not far behind. Our kids are more social and streetwise, owing to the joint family systems prevalent in a collectivist society such as ours. Our skins are thicker and our minds are sharper.

But our police seem to have gone one step ahead of us in this analysis, unfortunately. Sure our kids are smart, but criminally smart?

A few weeks ago a nine-month-old child was charged for attempted murder in Lahore. Just a while ago, a 12-month-old child was told to appear in court for being guilty of wall chalking in Gujrat. The news seems right out of a Younus Butt comedy piece or a Saturday Night Live weekend update or The Onion.

I do wonder what’s next.

Are the police seeing something we, parents, caregivers, psychologists, sociologists, psychiatrists, grandparents are simply blind to?

I’m sure lawmakers can delve deeper into the stupidity of such acts, how the word ‘minor’ or ‘underage’ is practically an understatement in this argument, but I do want to talk about how the death of common sense is prevalent when it comes to children. Instead of the police intervening in situations where children are left to rot out of illness (no vaccines, no basic health services available in so many parts of our country), famine and domestic abuse, apparently it’s easier to book the ‘kids’ when they’re rebelling. Wall chalking and attempted murder indeed!

Perhaps it is not as surprising if you look at it closely.

Pakistan has the highest number of illiterate adults in the world, right after India and China. 58.7 million people are living below the poverty line. Of course, when the country is in the hands of illiterate and poor people, we will continue to see situations like these arise. They don’t have food to eat and a mind cultivated enough to distinguish from right or wrong. Add to that a hypocritical moral code and fundamentalist elements that drive psychopaths to kill with no reprehension whatsoever.

Is it any surprise that they, hence, become foolish custodians of law or worse, selfish and criminal parents?

Human rights activists and NGOs will quickly bring this into light, I’m sure, but it takes no expert to understand that this is simply the lack of proper legal framework, a dearth of resources and a flailing infrastructure that creates events as ridiculous as booking and arresting and thus bailing a toddler.

The next time the police want to arrest someone, it would do well to pay attention to the man behind peddling a child for beggary, or a drug addict who has sent his child out to work in ostentatious bungalows for a few hundred rupees, or the countless madrassahs that are churning out suicide bombers!