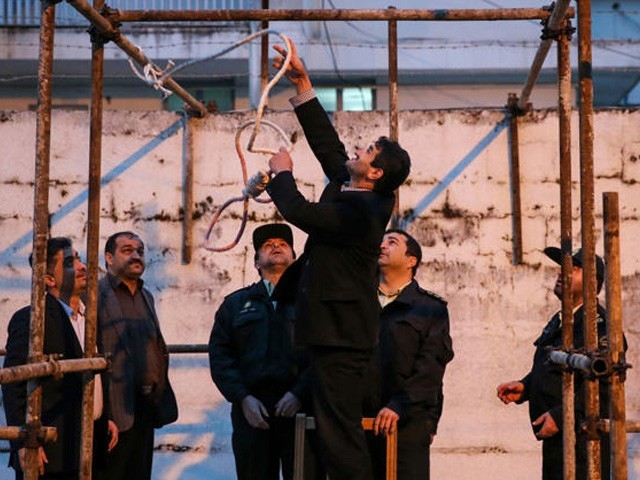 Pakistan has more than 8,000 prisoners on death row. PHOTO: REUTERS

It was recently reported in The Guardian that during a public execution in Iran, 20-year-old Balal, who was convicted of killing his 18-year-old friend Abdollah Hosseinzadeh, had the noose around his neck when Abdollah’s mother stormed up to him, slapped him and then forgave him for murdering her son, halting the execution and saving his life.

As quoted by The Guardian, Balal’s mother hugged the grieving mother of the man her son had killed. The two women sobbed in each other’s arms – one because she had lost her son, the other because hers had been saved.

I was tremendously moved by this as I found it to be a rare and extremely profound example of empathy, forgiveness and the courage that is needed to forgive someone for taking your son’s life.

The 2008 moratorium on the death penalty in Pakistan and the incumbent government’s decision not to reinstate the death penalty drew praise because of concerns that its courts and police were too inept to ensure the accused a fair trial. Pakistan did, however, break its own rules in 2012 when it executed a convicted murderer and a former army serviceman.

One of my very first jobs as a lawyer brought me in close proximity to death row inmates and to some of their loved ones. I would visit them in jails and found them to be human beings caught up in a legal system where corruption, torture, unfair trials are common and, ironically, so is the greatest form of punishment – execution by hanging.

Disturbingly, some of these inmates are innocent and yet are desperately waiting for their appeal process to finish while staring at the gallows where the state might take their life. Sometimes, while walking into cells of death row inmates, I was asked by the officials why I care about ‘second degree human beings’ or animals. My justification was that I did not meet animals all the time; I met fathers and brothers and sometimes, sisters, of the most wonderful people who had fallen prey to a justice system, which has always been unfair and severe in its injustice.

I have realised that the public perception in our nation is that the death penalty is linked to religion and that the ‘eye for an eye’ concept truly needs to be followed. But, as with so many other things, we may have completely turned the real followers of Islam upside down on this one. The ‘eye for an eye’ concept does not overshadow all the other teachings in Islam such as forgiveness or giving an accused the benefit of the doubt when he or she so merits.

Crimes according to the Islamic system fall into two broad categories – crimes of Hudood, for which there are fixed penalties as written in the Quran and crimes of Tazir, which are imposed on the state’s command. Homicide and other crimes which attract the death penalty in Pakistan such as usage of drugs or blasphemy fall in the latter category, meaning that the punishment is not set as per the Hudood and requires an appropriate conviction by the judge.

The principle of legality represented in the two hypothesises of ‘nullum crimen sine lege’ (no crime without law) can be directly found in the basic sources of the Quran and Sunnah.

There is also a strong presumption of innocence under the Shariah law. Under the strong authority of the Sunnah, we choose the direction that it is better for an official to pardon erroneously than to punish erroneously.

Obtaining confession against duress or coercion is downright illegal and strictly condoned as per the Shariah Law and yet, police torture is rampant in Pakistan, almost to the degree that one turns a blind eye to it. Any ambiguity in Islamic criminal law caused by acts of torture prevents judicial punishment in any form.

The Quran also lays down the principle of sanctity of life in a lot of places. According to my understanding, it is said that saving one’s life equals saving the lives of all the people (Qur’an Chapter 5 verse 32); God has made life sacred and therefore, we cannot take someone’s life other than the way approved by our justice and law system (Chapter 6, Verse 151). Even the exception to taking one’s life in this verse does not fully endorse the death penalty as Islam allows the victim to be fully pardoned by the aggrieved party or his or her family.

Muhammad Aslam Khaki versus the Federation of Pakistan (PLD 2010 FSC 191) was one significant judgment recognising the tortuous plight of condemned prisoners facing the death penalty and it was passed by none other than an Islamic court, Pakistan’s Federal Shariat court. It stated,

“From the time the trial court awards the sentence of death, at the end of an agonising and protracted trial, up to the time of the acceptance or rejection of his mercy petition by the President of Pakistan after dismissal of his appeal in the Apex Court, he has to pass through a distressing period of time awaiting confirmation of death sentence and disposal of his appeal by the Provincial High Court followed by an appeal to the Apex Court and subsequent mercy petition as well.

It is thus important to re-evaluate the treatment of prisoners accused or convicted of capital offenses and not treat them as ‘animals’ on face value. This is the least we can do even if we cannot reach the level of forgiveness achieved by Abdollah’s mother.