Feminism will never work in Pakistan 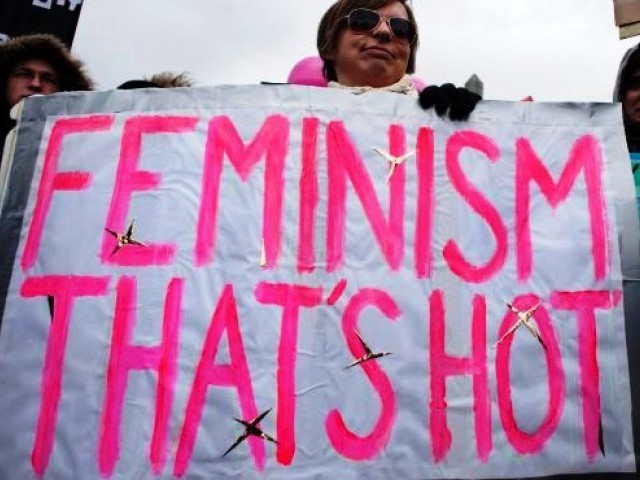 Feminism is a concept that sits at odds with a fiercely patriarchal, deeply religious and culture-obsessed society like Pakistan. PHOTO: REUTERS

“I myself have never been able to find out precisely what feminism is: I only know that people call me a feminist whenever I express sentiments that differentiate me from a doormat.”

These are powerful words, indeed.

Everyone has a different perception of what feminism entails but, universally, it espouses equality and freedom from discrimination, degradation and sexual violence. However, feminism is a concept that sits at odds with a fiercely patriarchal, deeply religious and culture-obsessed society like Pakistan. This is not to say that feminism doesn’t exist in Pakistan; it’s just not given much emphasis or is twisted to suit a man’s needs.

From birth onwards, a woman is taught to behave with the utmost poise, manners and good grace in order to secure a rishta (marriage proposal) with a man who has a good job or prospects of moving abroad. No such pressure or emphasis on behaviour is placed on a man. Instead, the man is often brought up in an environment where the females of his house wait on him hand and foot; therefore, naturally, he would expect the woman he marries to do the same.

Introducing a woman who has fiercely feminist views, one who believes that a man should wash dishes and cook as well, will only be a source for more problems and disagreements for both parties.  Additionally, if the in-laws get involved, the whole fiasco can escalate into an all-out war with the poor husband stuck in the middle, trying to remain neutral and calm.

Women should realise that the perception men have of women in their minds is usually a result of how their mothers have conditioned them to behave. For example, if a boy sees his mother being beaten or getting physically abused by his father, he will grow up and do exactly the same with his own wife. This has been proven time and time again to be true. Additionally, if a man sees that his mother doesn’t expect him to make an effort at home, then he will definitely grow up expecting his wife not to care about his callous disregard for household chores either.

The point is that one shouldn’t be afraid to introduce their children to what might be considered as gender-specific roles. So, boys should be asked to cook and clean the house and girls should be taught how to change a tire and do other outdoor chores. There is no shame or humiliation in this. We are no longer growing up in a world where male and female roles are clearly defined; the lines started blurring a while ago and the notion that a man’s macho image will be tarnished if he dons an apron is just ridiculous.

Doing this from a young age will help a man appreciate the efforts his wife takes upon herself to manage his home. Besides, I’m not saying anything blasphemous or against our religion. Prophet Muhammad (pbuh) has been reported to cook, clean, sew and manage his household affairs 1400 years before our men did. It seems as if Islamic Arabia was far more open-minded all those years ago than the 21st century Pakistan.

It will be wishful thinking to see such changes happening in Pakistan anytime soon, as it is still a very male-driven society. However, we do have some incredible women in Pakistan who are shining a beacon of hope and bringing about change in mainstream ideas, like Sharmeen Obaid, Samina Baig and Ayesha Farooq.

I am proud of these women and I feel that they deserve the same respect and recognition that their male counterparts would receive. Our whole life should not have to revolve around marriage proposals and weddings because, as women, we have a lot more to offer to this world.

Ardent feminists should also realise that men are not the enemy. Not every man is a bigot or a misogynist or out to attack our individuality or creativity. Sometimes men are able to look at a situation from an objective standpoint and determine a course of action which will, ultimately, be beneficial for all parties. Also, constantly telling a man that he doesn’t help out at home will only have the opposite effect. As long as there is no violence involved, compromising goes a very long way.

Feminism cannot be shoved down a man’s throat because he will never consider himself to be a bigot or misogynist. Instead, we should consider feminism with Pakistani-tinted glasses – your husband might not help you in the kitchen but try and ensure that your son does!